More than a wise, important rabbi: a good man 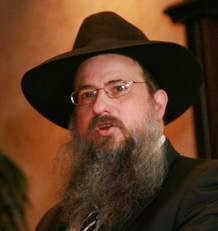 There’s an old Jewish joke that goes like this: A revered rabbi, famous for his goodness and wisdom, dies and ascends to heaven. Such is his reputation that God Himself slides over to welcome the new arrival and ask him what heavenly reward he would like for a life well-lived.
The rabbi considers this.
“Well,” he says. “The journey was long, and I am hungry. So a roll. Yes, a fresh challah roll. That is what I want.”
The Lord is amazed, and remarks to his angels: “See the pious simplicity of this holy man! He is offered the riches of heaven by God Almighty, and asks only for a roll.”
The Lord turns back to the rabbi.
“Truly, rebbe, is there nothing else you would like besides a challah roll?”
“Well . . . ” says the rabbi, musing, “a little butter would be nice.”
That isn’t the funniest joke, but it’s sweet. Which is why it comes to mind when I think of Rabbi Daniel Moscowitz, who was regional director of Chabad in Illinois, the Illinois representative of the Lubavitch movement. It wasn’t so much that he was learned — he certainly was — or active, both within his community and as a liaison to the world beyond, promoting his brand of faith in an endless chain of services, events, celebrations, seminars, lunches.
He was important, a leader. He guided his community, got things done, built a new Lubavitch center in Northbrook. But many rabbis are wise, active and important. That wasn’t why I admired him. It’s that he was a good man, kind, patient, even dealing with weak-tea Jews like me, constantly badgering him with questions that any learned 6-year-old should know. He taught me that you can use faith as a bludgeon, you can beat people up with it. You can use it as a measuring stick, to find how far others fall short. Or you can use it as a beacon and say, “Look, I have this really good thing here. Why don’t you try a nibble? Maybe you’ll like it.”
Rabbi Moscowitz was a beacon.
We met 15 years ago under difficult circumstances. I had put a jokey passing reference in my column to Menachem Mendel Schneerson, leader of the Lubavitch movement, who had died a few years earlier but was deeply esteemed. Rabbi Moscowitz called, not so much to complain — what good does that do?— as to discuss, to illuminate. By the time he was done, we were friends in my estimation; maybe he was so skilled at what he did that I was just another media source to be kept in line. But if that was the case, he fooled me.
When I got the bad news Tuesday — he died unexpectedly, after gall bladder surgery, at 59 — I flashed on all the memories over the past decade and a half that I only have because of him. Sitting at his house at Shabbos, the candles glowing, him quizzing my older son — a bright boy! Among a circle of Hassidic men, our arms interlocked, dancing wildly at the wedding of one of his sons. Sitting with Rabbi Moscowitz in intense conversation at their luncheons after services. When I stopped drinking eight years ago, he phoned — not many friends did, but he did —and in our conversation said that, because of his health, he had to cut back wine too. But what can a person do? We do what we must. We endure.
Over the years I would call him to ask questions: Why do we display lights at Hanukkah? What does the Jewish calendar represent — 5,700 or so years since what?
My family attended services at his center, and his sermons were wise, witty, brief.
When my wife and I were getting ready this week to go to his house to offer our condolences, the question arose: what to bring? You make a shiva call, you bring food. But it wouldn’t do to drag tref into a rabbi’s house.
“Maybe some tangerines,” my wife said.
“I don’t think fruit can be unkosher,” I replied. But we puzzled, unsure.
“I’ll call Rabbi Moscowitz and ask,” I said, and she gasped. I had meant it as a sardonic comment on the void he leaves; he is no longer here to answer questions. She thought I was referring to his son, Rabbi Meir Moscowitz, following in his father’s footsteps.
The confusion points toward the comfort in this tragedy. For Jews, our heaven is here on earth, our eternity is found in our children. Life and death are twins, we believe, brothers joined at the hip. It is ingratitude to celebrate one and decry the other.
So we don’t rail at death. We accept it. Our good works live after us. Rabbi Moscowitz had nine children, countless friends and achievements. His memory will radiate onward, a blessing. And yet. Were he here, I’d tell him, “Yes, yes, but it’s still very hard.”
“Of course it’s hard!” he’d reply, his eyes twinkling. “But what choice have we?”