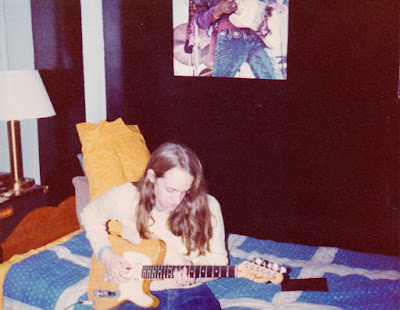 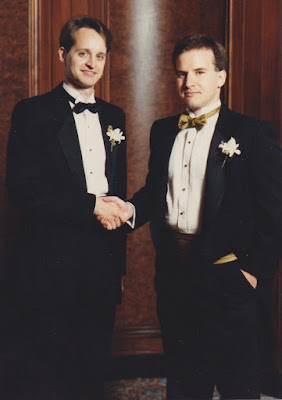 My first job took me to Los Angeles. Another dead end. I tried to last six months and lasted three. Back in Chicago, Kier would tear Matt Groening's "Life in Hell" cartoons out of the Reader and mail them to me, in that half support, half mockery that friends do. When that job blew up, I drifted eastward, pausing to live with my folks in Colorado. When I returned to campus, one year after graduation, a certified failure to launch, I moved in with Kier—in the third floor of his house on Forest. "Home is where, when you have to go there, they have to take you in." Two weeks on a cot set up in an empty attic under an inverted V of shiny insulation, watching the bare bulb, hands folded behind my head, thinking, "How did I fuck this up so badly? And so fast." The starting gun went off. And there I am, face planted a yard from the blocks, trying to get to my feet while my classmates lap me, one year already gone.
Kier's band, meanwhile, was hot, with a young thumb-slapping bassist, recording sessions and influential people interested.  But success of the kind that allows a person to live on it was elusive, over the next decade Kier faced a choice, and chose wisely.
"Music was his life," sang Harry Chapin, who knew how to write a lyric, "it was not his livelihood." I thought it a testament to Kier's character that eventually he set aside his guitar and joined the working world, as did I. The novel went into a drawer and I began rolling the stone of professional journalism up the hill. We both, not stars, but practitioners of the possible.
We knew another student, Nathan, a gaunt, pop-eyed, jittery guy who also wanted to be a musician. A year younger. I remember sitting in his dorm room while he explained to me that he was going to be a rock star, and I just looked at him like he was crazy.
But he wasn't crazy. He was driven.
Speaking of driving. Kier and I were driving in the broken down blue van the band used. And there was Nathan, walking along the road. So we pulled over and gave him a lift. He asked Kier what he was doing, and what Kier was doing was working at Student's Publishing.
"Well," sneered Nathan, radiating contempt—his superpower, "somebody's gotta frame the artwork."
I don't know whether singing in Urge Overkill amounts to a life well-lived. But I've never, in the past 40 years, cared enough to find out. While Kier and I have been in constant communication as we pushed our lives forward. I can't remember Kier ever being in a bad patch—he's far too stable for that. Though I remember helping him move into a crappy little apartment on Broadway, and worrying for him. You're living HERE? I though, but didn't say. There was a pipe running across the ceiling, maybe seven feet up, and I remember staring at it, grimly, wondering, Is this the pipe Kier'll hang himself from? Of course I was projecting my own insecurities more than anything else. He was fine. Kier is always fine. I have many good friends, but if I had to pick one to be holding the rope that I was clutching while I dangled off a cliff, I'd pick Kier.
Which reminds me: back on campus, I was trying stand-up comedy. I had to try something. We had some kind of group, comic performers. I can't even remember their names. But I wore hard contact lenses, trying to make myself more palatable, and one night, waiting to go on in some forgotten club, I left them in too long and my eyes swelled shut. I ended up at St. Francis Hospital, where they treated by abraded corneas, covered my eyes with bandages, and told me I could go home.
"How?" I asked.
Who brought you?
Nobody brought me. I came in an ambulance. A nurse handed me a phone. What number to dial? It was 3 o'clock in the morning.
I called Kier. Which is as good a definition of a friend as you're going to find: your friend is the guy you call to come get you at the hospital at 3 a.m. He rode his bike over and walked me back to my apartment.
Life clicked by, day by day, year by year. I can see my first real apartment in Oak Park, on Washington Street, with the aluminum deco sconces. Kier called from New Orleans: he had asked Cathleen to marry him.  A nurse, as grounded as he is, and one of the prettiest women I have ever seen. I remember my advice when he had said he was thinking about asking her to marry him: "Well, if you're not certain you ever want to get married, then give it thought. But if you might want to marry somebody, someday, then by all means ask her right now. Because you'll never find a better woman willing to give you the time of day." Or words to that effect.
So he got married—I was the best man. Sorry Kier, about forgetting the boutonnieres back in the refrigerator of my apartment on Logan Boulevard, and the mad dash that Edie had to go to retrieve them so they could be pinned on as the music swelled for you to walk down the aisle. A little bit of unnecessary drama and tension, I know. But it all worked out okay. 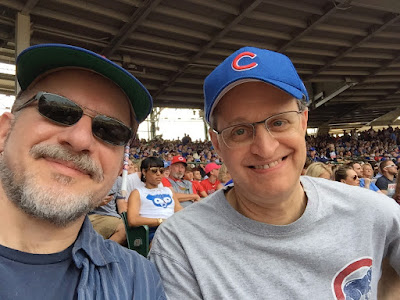 For a number of years we'd grab a movie in the three days between my birthday and his. But family and work, time and routine, plus there not being a convenient way to get from Naperville to Northbrook, all go in the way. Which was okay. We didn't need frequent check-ins. We had a past. We knew. It all worked out okay.
That's how I felt last week, turning 60. An astounding, perhaps Kier-like calm. It had all worked out okay. Better than okay. Great. Not great in the usual sense of the term. Not famous. There was no "Steinberg at Sixty" retrospective at the Chicago History Museum, which I could imagine if not achieve. But greatness is overrated. Hemingway was great at 60 and shot himself in the head at 61. Frankly, I feel I feel I've found myself a better gig. I am lucky in love, blessed by work I like to do, and so rich in friends, the oldest and best being Kier, who didn't become a star, like Nathan, later Nash. But he didn't have to be. Never being a star also meant never becoming a has-been either. He didn't die at 28, like Jim Morrison. He didn't have some hit in 1993 that everybody has forgotten by now. He isn't some Oh-yeah-I-remember-that-guy in a non-age appropriate haircut, a dangly pirate earring and mascara, playing to four people at the Heartland Cafe. He cut his hair, raised two great sons, became a Christian and a grandfather and a good, thoughtful friend, the kind who sends CDs of music you might like for your birthday.
Songs on Apple iTunes, by the way, now scroll the lyrics to songs. No laborious guesswork necessary.
That tricky line to "Safe European Home" is, "Who that Martian arrival at the airport, yeah?"
No wonder we couldn't figure it out. Something of a let-down, to find out. But hey, that's life. You wait 40 years to learn something that wasn't worth knowing in the first place. Maybe what was worthwhile was in the figuring out part, not the mystery we were figuring. Which comes as no surprise. Maybe that's wisdom.
On Wednesday I saw the photo montage Kier put on YouTube—our college life, photos I had never seen, jumping to marriages, to kids, to his kids' marriages. Putting this together took planning, consideration, work I called Edie up to my office to see it.
"What am I going to do?!?!" I wailed. "His birthday is three days away." I always get blindsided by his acts of consideration. All those mix tapes, then CDs of music, arriving promptly on my birthday. Thoughtful. Did I ever return the favor? I hope so, in some other, smaller way.
Edie, of course, as she always does, assessed the situation immediately and offered the perfect solution.
"Write something," she said.