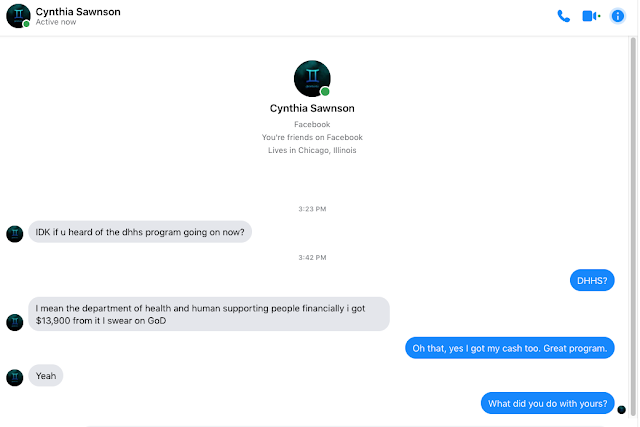 We are hit by such a barrage of scams, come-ons, grifts, ploys and frauds of all kinds, you'd think we'd be more discerning by now. Yet those who bat away the pleas of Nigerian princes fall 100 percent and forever to the oily entreaties of lying leaders. It's very worrisome.
While I have no problem ignoring the hammering of crooks, commercial or political, at my various electronic doors, there is my playful side, and sometimes I just can't help screwing with them a little bit. Yes, I know I'm not matching wits with Lex Luthor, but merely causing a flash of puzzlement of someone in a basement boiler room in Burkina Faso. If that. But I occasionally do it anyway, for my own amusement.

I don't owe anything to the grifters, and they approached me, so I'm free to respond as I please. There is no rule that I must stay on script. Besides, I figure every second they parley with me, who is never sending them a dime, is a second they can't use to squeeze the retirement fund out of some gullible elderly couple in Idaho. So I am actually doing some small amount of good. Besides, I can be bored sometimes, and it's interesting to see how they handle it. Usually by fading away.
Although it was a little disconcerting to see Facebook friends this week posting the amounts they received back from their Facebook settlements, because those of course were real, I think, although they followed the scam pattern. I do wonder what the fraudsters I respond to make of our exchanges.

But eventually I get bored, and move on. An important skill in social media, one that many never seem to master.