Every Saturday since her debut April 11, 2020, I've turned the blog over to Caren Jeskey. At the time she was a Rogers Park refugee wandering through the sublime strangeness of Austin, Texas. There was no plan, no commitment. But her first offering was immediately embraced and appreciated by EGD readers, and since then, every week without fail she sent a new entry, and every week I've gratefully posted it.
Readers like her work as much as mine, if not more so—she's a very different worldview: spiritual, empathetic, sincere. I think we make a good tag-team, an unlikely pairing of Juvenal and Gaia. Though it would be a mistake to cast her merely as a palate-cleansing amuse bouche after six courses of me, me, me, (me) me-me.  She is a voice in her own right, and I'm proud to provide a platform for her.
Even though I scrupulously frame Caren's offerings with a little introduction, mainly to establish that you're reading someone else, readers are occasionally confused, naturally thinking, "It's "Neil Steinberg's blog, so I must be reading Neil Steinberg." I thought it might help if Caren had a higher profile here, including, ah, a profile. I asked her to cobble together a bio. Here it is: 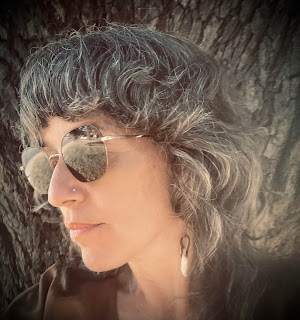 Caren is not sure why her name is spelled with a C, but she is glad it is in this era of Karen defame. She thinks it may be in honor of her Great Aunt Caroline, and is grateful for the fact that she is able to say "my name is Caren with a C, because I care." Caren's parents like to say that with Caren as a kid, their home felt like the United Nations. They also like to say that she had a special place in her heart for everyone, thus invited everyone from their diverse Rogers Park neighborhood home with her.
Caren's curious and inclusive spirit led her to study psychology at DePaul University, volunteer for social causes, and eventually become a social worker in the early 2000s. Caren's European-born grandfather Karol, whose Polish name was Americanized to Carl, worshiped the architecture of the University of Chicago. It made him feel more at home with stately stone buildings reminiscent of his birthplace, Budapest. (Yes, he was Polish and born in Hungary). He took Caren's mother Myra to its majestic grounds on Sunday father/daughter days, and Myra grew to love the impressive Rockefeller Chapel and nearby Midway Plaisance as much as her father did. Myra found her way to graduate school at the University many years later, and Caren followed in her footsteps. Myra graduated from the School of Social Service Administration, and Caren earned her own MA from SSA in 2002.
Caren became a social worker and eventually graduated, becoming a psychotherapist. Caren delights in treating adults of all ages as they strive for a greater sense of well being. Caren has also taught yoga and meditation since 1999, and plays silver and wooden flutes. She's been a longtime fan of Neil Steinberg and can almost not believe she's had the honor of being published on his blog since April of 2020, when she reached out to him as a fan, and he reached back. Caren has the north side of Chicago in her bones and blood, but she is also part soot and steel with her father Tony's family hailing from just under the skyway on the Southeast side of the city.