And lo, God sent a vision of brisket 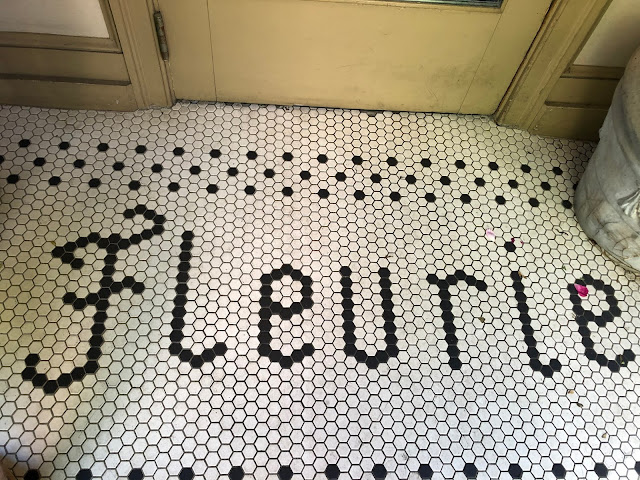 A restaurant must achieve three key qualities to be the sort of place you can revisit or recommend. Good food, of course. A space that you want to eat in—an element that a surprising percentage of eateries botch. And third, that most elusive of attributes: friendliness.
Not forced friendliness. Not going through the motions of being polite. But something warm, genuine, sincere. Otherwise, you can eat at home.
Being a social person, I especially hunger for this third quality. If I'm patronizing a place, I expect them to be nice to me.
To celebrate my younger son graduating from University of Virginia Law School, we of course went out to celebrate. I told him to pick anywhere that tickled his fancy, and he selected Fleurie, a French restaurant off the Charlottesville mall offering a prix fixe menu at $75 apiece. Not cheap, but heck, he flew through law school without causing me to furrow my brow once. He's earned it. The meal was fine; they brought a variety of little appetizers and special touches, all with a quiet deference, and while I misordered—I didn't realize my venison would be quite as gamey as it was, tasting somewhere between liver and a corpse—my son, who had been here before, and ordered the venison before, told me I should have expected this.
So Fleurie was ... fine, my meal notwithstanding. ("They should have warned you," said my wife, who tasted my venison and spat it into her napkin).
But the next night stood out in a better way. My boy knows that I like barbecue—who doesn't?—and so perhaps to make it up to me, he suggested we go to a new place in a strip mall called Vision BBQ. Frankly, the name worried me. "Vision?" We walked in, the only patrons. Another bad sign. But too late now. A man with a bandana around his face, the smoke master I assumed, told us he had just taken a marvelous pastrami off the smoker.
"My people's meat," I said, and we adjusted our platters, pitching the pork for the pastrami. While we waited, I had to ask where "Vision" came from.
"That's odd for a BBQ place, "I said. "You expect 'Leon's' or something."
Michael, one of the owners, said that it's because the idea of starting a barbecue restaurant came in a vision.
"A vision ... from God...?" I said.
That's how you want your barbecue to happen. Divine inspiration.
I paid the bill—it was the sort of place where you order and take a seat. About a sixth of the cost of the night before. The computer asked if I wanted to tip, and I didn't. I usually do, the pandemic and all. Because they were just handing the food over the counter and, to be honest, since I was still stinging and so perhaps a little parsimonious after the bill at Fleurie, which had grown considerable with add-ons and drinks and such. We took a table outside.
Then three things happened to seal Vision in my affections. First Michael came outside where we were sititng, with a new bill, explaining that he had miscalculated. "A heavy finger" I believe is the term he used. This bill was $15 less. I walked inside to pay the new bill, in and explained I had made a mistake of my own, and handed over $8 as a tip. The food came out, in hearty metal trays lined with wax paper; a nice touch. The corn muffin was very moist. "Almost a souffle," my son said. The brisket had a hearty bark on it. The red sauce was suitable piquant—a very minimal tablespoon in a little plastic cup, true, though the meat was good enough that it didn't need it. Not Smoque. Not Green Street Smoked Meats. But not bad. In fact, good,
Then the last thing happened. The smoke master, who had been scurrying back and forth to the smoker in the parking lot, came by with three chunks of burnt ends, for us to try, knowing we were from out-of-town and apt never to come back—I talk a lot—but delivering a little treat anyway.
I like that. Not just the little extra, but the consideration that inspires it. The friendliness. The pride. So Fleurie if your kid requests it, but for the love of God don't order venison. If you find yourself in the vicinity of Charlottesville, Virginia, and are looking for barbecue, slide by Vision BBQ and fill up. You can tell them I sent you. 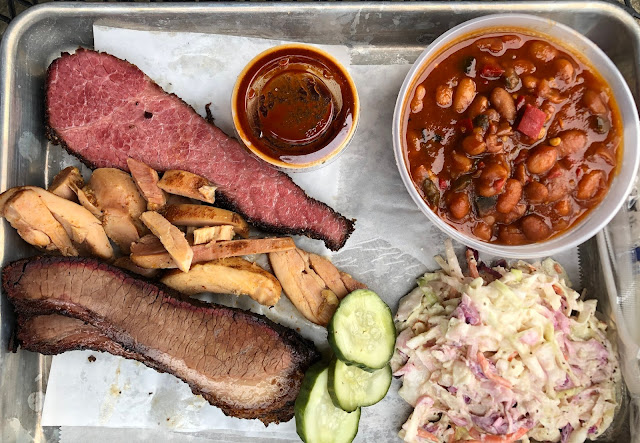