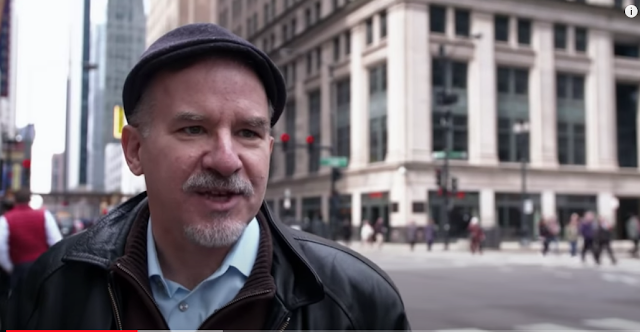 Neil Steinberg writes for the Chicago Sun-Times (though the newspaper does not sanction or supervise this blog, and is in no way involved with or responsible for its content). He joined the editorial staff in 1987, and his news column began in 1996.  The National Headliner Awards honored it as the best local interest column in the country in 2022.

He has also written for a variety of publications including Esquire, Rolling Stone, The New York Daily News, The Washington Post, Sports Illustrated, Men's Journal, Details, Granta, Rotary Magazine, Spy, National Lampoon, The New York Times Sunday Magazine, Washington Monthly, Chicago Magazine, the Chicago Reader and Michigan Avenue. None of those publications are involved with this blog either.
A prolific freelancer, obviously, he has also written corporate web sites, trade association speeches, commencement addresses, concocted games for GAMES magazine, stunts for a Nickelodeon kids' show, the text on a memorial plaque, and conceived two cartoons published in The New Yorker. His rates are reasonable.
Online, in addition to his daily blog, Steinberg has written for Salon.com, Forbes.com (as well as Forbes in print) and Mosaic, the website of science and medicine once run by the Wellcome Trust, the largest medical charity in Britain. His stories there were republished around the world, by CNN Health, the BBC, the Guardian, and others. One was anthologized in a book, Bodyology: The Curious Science of our Bodies.
He—oh heck, me, I'm writing this—is the author of nine books, that have been featured on Oprah, Good Morning America, CBS Sunday Morning and other television shows. One, You Were Never in Chicago, was reviewed on the front page of the New York Times Sunday Book Review. Although, to be honest, the reviewer hated it.
My latest book is titled, Every Goddamn Day: A Highly Selective, Definitely Opinionated, and Alternatingly Heartbreaking and Humorous Historical Tour of Chicago. Loosely based on this blog, it was published in October by the University of Chicago Press. Newcity called it "a moving, living picture of Chicago’s past. The ambition of the project and the tidy economy of each one or two-page vignette means he packs a lot of Chicago into one book." It can be ordered here.
A graduate of Northwestern University's Medill School of Journalism, I have taught writing at Loyola University and for the State University of New York's Maritime College. I was  featured speaker at the Uptown Poetry Slam at the Green Mill, twice, spent a month living at the Ragdale Foundation artistic community in Lake Forest, and am currently a scholar-in-residence at the Newberry Library in Chicago.
I live in the leafy suburban paradise of Northbrook with my wife, a cat, Natasha, and a dog named Kitty.  We have two adult sons.