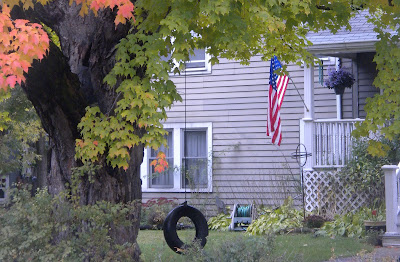 When we moved to Northbrook in 2000, the boys were 3 and 4, and the big old sugar maple in the front yard called out for a tire swing. I'm not sure why. It wasn't as if I had a tire swing as a kid. Heck, I can't recall ever swinging on one.  Growing up in the suburbs of Cleveland, our brand new single story ranch house didn't have a tree that could support a tire swing had we wanted one. A puny linden in the front yard, the delicate V of a young birch at the side.  Nothing like this enormous sugar maple filling the front yard, dwarfing the house, its branches, like extended palms, quietly murmuring, "Gimme the swing."
I had never attempted a tire swing before, but I knew a tire is required. Not a new tire of course—that would be stupid—but an old tire. Where does one get old tires? A service station, of course. They take old tires off, so must have them lying around. 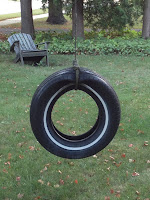 We stopped at a gas station in the city. There was a stack of old tires by the service bays. Trying to exude an air of competence, I went up to a guy in a blue mechanic's uniform.
"Hello there," I said. "Please tell me, my good fellow, how much money would you require to part with a used tire?" I might not have used those exact words, but my tone was the same. I'm sure that's what the grease monkey heard. He gave me a long, appraising look.
"Well," he said, "considering that I pay $1 a tire to have them hauled away, I'd say you can take as many as you like."
Slightly surprised, I selected an appealing looking whitewall, purchased a hearty length of rope later at the hardware store, and hung the tire.  For many years, the boys span and swung on that tire. It was the epicenter of delight. Every so often I'll hook my foot inside, step up, grab the rope and go for a ride myself.
But beyond that ... and this only struck me recently ... I've never seen a house in the Northwest suburbs with a tire swing in the front yard. Rather amazing, now that I think of it. Maybe a tire swing is considered low rent. A few bucks—the price of a rope—and a little effort to snag a free tire. The swing doesn't exude wealth or status. Although I would argue that there is a wealth of feeling, of casual warmth and easy living behind it.
To my neighbors' credit, they never complained, at least not to me, and my hunch is, not to anybody. Because they wouldn't hide a thing like that, especially now. Someone would blurt out, "So, the boys almost off to college, guess it's time to cut down that old swing, huh?" Nobody has said that yet, and I'm not expecting them to. My sense is they like the swing. There is something very welcoming, something low key and unpretentious about a tire swing. The boys haven't swung in it for years, and kids don't come over so much anymore. But we're keeping it up, because, well, it wouldn't be home without it. 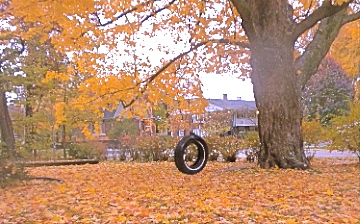