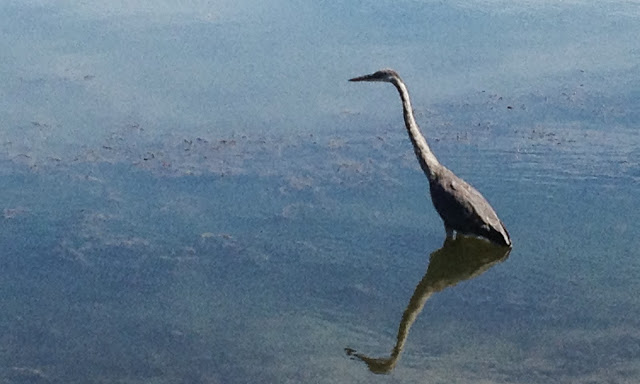 If man is, in Hannah Arendt's phrase, homo faber—Latin for "man the (tool) maker"—then herons could be referred to as avis faber, "bird the toolmaker," since they are one of the few birds that actually craft objects for their use.
Avid fishermen (or, I suppose, fisherbirds), herons will break off bits of twig with their sharp beaks and toss them into the water as lures, then snap up the fish who come to investigate.  Their long necks can coil and strike, just like a snake, and they devour not just fish, but frogs, turtles, large insects, small mammals such as voles, and even other birds. Just about anything that comes their way.
Herons, such as this Great Blue Heron spied last week at Beck Lake, in the Cook County Forest Preserve between Glenview and Des Plaines, are known as solitary birds, as opposed to geese that are seen in honking abundance this time of year and best avoided (I tried to get a picture with some low-flying geese flapping by in the background of the Great Blue but, being geese, they refused to cooperate).
While Great Blue Herons often go about their business alone, they return at night to loose colonies known, rather delightfully, as "heronies." So no need to try to befriend them—they have their pals, hidden away. Great Blue Herons are actually a variety of white heron, and the largest heron in North America.
I spied this fellow in the shallows. Impossible to tell if it's a male or female—Great Blue Herons are "monomorphic," meaning the male and female have the same color plumage, and they also share duties rearing the next generation.
A very modern habit, though they are considered ancient birds, birds that "look like prehistoric ghosts," to use Diana Wells' lovely phrase. She quotes a 9th century writer, who believed the high-flying herons reach altitudes where they "behold forever, the countenance of God."
Whatever they are looking at, they are not only pleasant to behold themselves, but good omens, too. Herons, being predators, are considered signs of ecological health. Score one for the Cook County Forest Preserve.
The Great Blue Heron's actual scientific name, by the way, is nowhere near the one I imagined: ardea herodias. Ardea being, sensibly enough, Latin for "heron." And Herodias -- the surprise in the whole story -- being Greek, the name of a notorious Queen of Galilee. It was Herodias who asked for John the Baptist's head on a platter, supposedly, and encouraged her daughter Salome to dance with the bloody souvenir. How this dread figure's name got assigned to so beautiful and benign a bird, well, I'm working on that. My hunch is: blame the heron's omnivorous appetite. If you are willing to eat almost  anything, people notice, and say unkind things about you.