Baha'i celebrates a bicentennial: "People can just walk in." 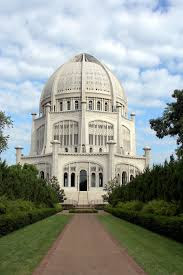 Chicago is a center of so many things—the blues, candy, pinball—it's easy to lose track of some of the quieter examples of this, such as the Baha'i faith, which isn't as fond of violence and repression as most religions are, and so tends to be overlooked, with the exception of its one magnificent local manifestation, the splendid Baha'i Temple in Wilmette.
Today, Chicago Baha'is are celebrating the bicentenary of the birth of Mirza Husain-ali Nuri, or Bahá’u’lláh as he came to be known, "Glory of God." in Iran in 1817. He was the messenger of the other totem of Baha'i, the "Bab," whose bicentennial is in 1819.
If you feel like partying, you can go to the South Shore Cultural Center tonight—here are the details—for the rest, I thought it an apt moment to unearth my look at the Baha'i faith and Temple at the building's centennial five years ago.


Ask most Chicagoans what they know about the Baha'i faith, and they might mention the House of Worship, a magnificent domed edifice of delicately latticed concrete on the lakefront in Wilmette.
The temple is hard to miss—at 191 feet high, you could easily tuck the Jefferson Memorial inside.
"It's on people's radar that this landmark, this unusual building is there," said Glen Fullmer, a spokesman for the faith. "But they're largely unaware of what it stands for or where it came from."
The Baha'is have just completed a 10-year, $20 million restoration of the building, the oldest and, in their view, holiest of seven Baha'i temples scattered around the globe. The work is completed just in time for a celebration at the end of April to mark the 100th anniversary of the dedication of the building's cornerstone.
"It does not act as a church with a congregation," said Fullmer. "All the Baha'is don't go there for their weekly worship. That building is considered a continental house of worship, a symbolic building. Most worship is happening in people's homes and little community centers."
That might come as a surprise. Press Chicagoans for details of Baha'iism, and you'll most likely draw a blank, which is too bad, because in many ways the faith is unique among global religions.
In a world of controversial priests and fiery imams, there is no Baha'i clergy whatsoever. Anybody can conduct a service. Administration of the religion is handled by elected boards without spiritual authority. They have no rituals. Services tend to be readings from the holy books of other faiths—the Bible, the Torah, the Quran—as well as singing.
They don't proselytize vigorously—Baha'i missionaries will never come to your house and try to convert you. "It's very much a do-it-yourself religion," said Fullmer.
Nor will they ask for money—they only accept funds from other Baha'is.
The religion's central belief is that the earth is one country and humanity its citizens, that all religions reflect the will of a single God and all are equally valid. They stress education, equality and an elimination of prejudice.
The faith started in Persia—in what is now Iran—in 1844.
Its central figure was a man named Mirza Husain-ali Nuri, who took the name Baha'u'llah, whose teaching and writings form the foundation of the faith.
The Baha'i consider him on par with Abraham, Moses, Jesus and Buddha, who all share equal status as divine prophets.
About 5 million people follow the faith worldwide, with about 170,000 in the United States, with 2,000 of those around Chicago, where in 1894 an insurance salesman named Thornton Chase became the first Westerner to adopt the religion.
Within five years, there were several hundred Baha'is in and around Chicago. They quickly decided to build a temple to house the growing religion. Representatives from Chicago went to what was then Palestine to meet with Abdu'l-Baha, the son of Baha'u'llah, who had taken over as leader following his father's death in 1892. He encouraged them to build a temple, and the dedication was something of a carrot to get him to come to Chicago, which he did.
Several years were spent scouting a location. Jackson Park was considered, but Wilmette was settled on for its rural setting and inexpensive lakefront land.
Despite his presence, the May 1, 1912, dedication was something of a bust, as far as cornerstone ceremonies go. First, the guest of honor was two hours late. Second, the ceremonial trowel would not pierce the thick springtime grass and somebody had to run and borrow a shovel from a nearby road crew.
And third, there wasn't actually a cornerstone, but only a chunk of limestone scrap that a woman had begged from construction workers and taken to the site on a horse-drawn streetcar.
Money still had to be raised. Construction did not begin until 1920, and the temple was not completed until 1953. 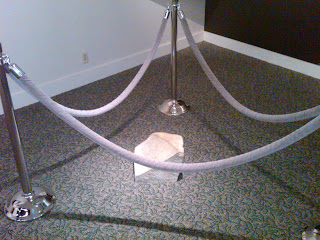 Still, the crude cornerstone remains as a symbol of the do-it-yourself quality of the faith, to this day surrounded by a triangle of velvet ropes in the ground floor visitor's center at the temple.
Above, the temple seats 1,200, and is accessed by nine doors—the number nine is highly significant in Baha'i, representing unity.
Work on the nine gardens around the temple is just now being completed, the final stage of the rehabilitation project.
"We repaired the entire temple itself, cleaned it and got it ready for its next 100 years," said Scott Conrad, a California architect who has been project manager on the refurbishing.
About 25 percent of the surface area of the building was rebuilt, including the steps, which were completely replaced.
To clean the intricate concrete work, skilled mountaineers were hired from Alaska and Colorado to rappel down the building, cleaning the facade with brushes.
"It is considered the world's most exquisite concrete building," said Conrad, standing among a mass of purple flowers being planted in advance of the centennial. He said the gardens were never before quite up to what the founder's son had hoped for when the temple was first planned.
"These gardens are completely new," he said. "In the Baha'i community, the gardens are part of the temple, and these gardens are a fulfillment of Abdu'l-Baha's wish."
Now, what they would like is for Chicagoans to visit.
"There is a misconception, 'Oh, this must be secret,' " said Fullmer. "The temple is open every day. People can just walk in, sit and enjoy the spirit and serenity of it, regardless of their faith. It's a sacred place they can go. That's really the hope of the Baha'is, the main purpose of it."
—Originally published in the Chicago Sun-Times, April 22, 2012
Posted by Neil Steinberg at 12:00 AM