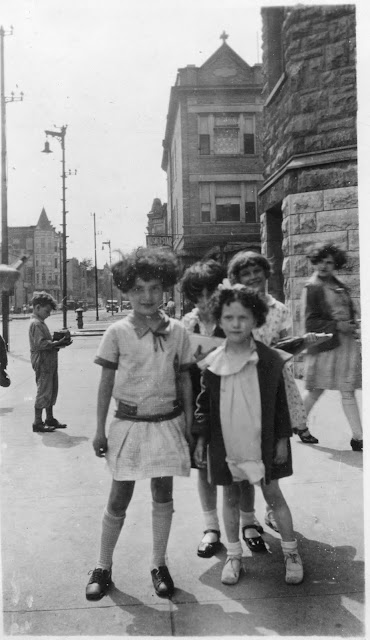 Today's snapshot comes from Bernard Linzmeier. It is of his mother, the smaller girl on the right, and her sister, three years older, on the left.
He says the photos was taken in the late 1920s near Homan Avenue, looking west down 16th street. The sign behind them, he says—I can't read it—is for the Kosner Star Sausage Company.
But none of that is why I decided to post the photo. There is something going on in this picture that was one of the more radical developments in feminism in the 1920s. I wonder if you'll notice it, unprompted.
All five girls here reflect this change, whereas, a decade earlier, they would not.
Look closely. Perhaps pause on the lone boy—it looks like he's holding a Brownie camera, which was popular at the time, and would be a sly wink at today's theme. Hard to tell. Could be just a box. Photos can be deceptive, the way if, you look to the far left, there is what, for a moment, struck me as a hand holding a cell phone, as if taking a photo of the girls. It's not, of course, just the deceptiveness of the shape. Funny to consider though.
It's the hairdos—they all have bobbed hair, which represented rejection of previous norms of femininity. The fashion started around World War I with a few pioneers, French actresses and such, and by the early '20s young American women—"flappers"— were dressing in short skirts, flinging away their corsets, and sheering off their long hair, which had forever been the very definition of femininity. By the time this photo was taken, it had filtered down to the schoolyard, as fashions do.
Girls had long had short hair before, of course—Pixie cuts, and such. But the frizzed out look was particular to the bob, three of the five girls have it, and if you want to get a grasp of just what a radical act bobbing your hair once was that had in a few years become tame enough for girls to convince their parents to allow, track down F. Scott Fitzgerald's 1920 story, "Bernice Bobs Her Hair," a "drama of the shifting, semi-cruel world of adolescence." Mean girl Marjorie feels oppressed by having her Wisconsin cousin, Bernice visit her, and, in pretending to befriend her, goads her into bobbing her hair, to the shock of all and, well, better just to read it. You see Fitzgerald delving into his favorite themes of flaming youth and the upper crust, with a surprise ending I wouldn't dream of hinting at. For a 98-year-old story, it holds up well.
The big deal over how women styled their hair is a reminder that women have always struggled to crawl out of the box that society, aka men, have tried to keep them in. Even in the smallest detail of their lives—how long their hair should be—the choice was not so much their own as imposed upon them. A battle which, as we all know too well, continues today.