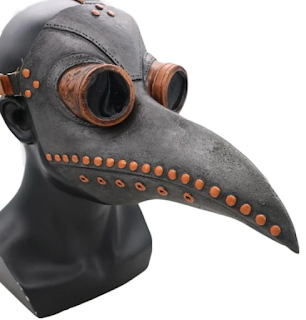 "You want to go for a walk?"
"I'll walk one of your cigars."
"That sounds like a plan."
Except I was down to my last one—a holdover from Thanksgiving. The weather wasn't conducive, and I've cut back on the habit. Unhealthy. But extraordinary times demand extraordinary measures. I told my wife that the boys and I were driving over to Binny's. My wife was against it—not the cigars, this time, but the outing. Exposing ourselves to plague.
I promised to wash my hands before and after. And wear a mask.
I had a package of 3M dust masks I used in my shop, for sanding and such. We grabbed a pair.
In the Binny's parking lot, I put it on, fitted the elastic bands around my head, pressed the metal strip to the contour of my nose. I checked out myself in the rear view mirror.
"I look like I'm going to rob the place," I said.
We went in. I wanted to get a case of Pabst NA—they come in cans—but they were out. I went up to two Binny's clerks to interrupt their conversation and asked if they had moved the Pabst. As I did, I inadvertently coughed. I'm not sure why. The mask, a mote of dust blown off a bottle of The Macallan 18.  Something. A dry cough.
One of the clerks stepped back so fast it was as if he was yanked on a string. I almost mumbled, "Not a sick cough, just a cough cough. My wife is making me wear the mask." But that seemed unnecessary. They aren't carrying Pabst NA anymore, but could special order. Nah, no need, not in the current crisis. I said I only really need it when I go up to the UP in the fall—the guys had the regular Pabst and I had the NA. We had a Pabst theme going. But otherwise, Clausthaler is fine; tastes far better, in fact. I just liked the cans and figured, with the future uncertain, Pabst represented a laudable economy.
Five cigars. Rocky Patel Vintage 1990s; some standards must be maintained. A few other shoppers also wore masks. That helped, incredibly so. Support. Approval. We are such social animals. You'd feel comfortable wearing your underwear on your head as a hat if enough people on the block were doing the same. Our president is killing people, not wearing one. But then his hands are already red up to the shoulder. In for a dime, in for a thousand dollars.
Back at the car, we squirted hand sanitizer on our fingers, rubbed it around, then removed our masks.
"I guess those hijabs aren't a problem anymore," I said.
"What?"
"All that hubbub to ban headscarfs and burkas and such. I guess people covering their faces in public isn't a problem anymore."
"That was just in France," he said.
Nothing is just in France anymore. Or China. Or here. Everything is everywhere. That's one lesson of this thing.