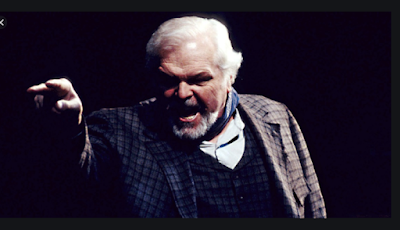 I only spoke with Brian Dennehy once—if you don't count my drunkenly accosting him while he was trying to eat at Petterino's to tell him how great he was. The other time was this interview that ran eight years ago, under the headline, "O'Neill's 'Palace of Pipe Dreams;' Brian Dennehy helps Chicago brace for Goodman's 'The Iceman Cometh.'" I remember being inordinately proud of my script format. I always thought there was an element of penance to his O'Neill work at the Goodman, paying for all those Hollywood potboilers with five hours of "The Iceman Cometh," which I saw both times Dennehy did it here, in 1990 and 2012.  He no doubt lured many Chicago theatergoers to O'Neill though, for me, it was the opposite: O'Neill drew me to him.

SCENE—A columnist, fifty-one, the stamp of his profession unmistakably on him. Day, near Chicago, a room with doors.

SHADOW ME—(a trifle acidly) Of course you'll go. You always go. You have to. Because you're a sap, a sucker for O'Neill.

ME—I can't. I'm compelled to go. I'm not even sure why. A bum fixation. What is it about Eugene O'Neill? (Dialing telephone).

I'm going to ask Brian Dennehy, the actor who's been starring at the Goodman in O'Neill plays for years. I saw his "Iceman" 20 years ago. Why should anyone see it again?

DENNEHY—(gruff, gravely-voiced) Chicago is probably the premier theater town in America. People have a real appetite for one of the great plays ever done. With Nathan Lane, the curiosity factor will help.

DENNEHY—(patiently) Look, we live in a world where "Jersey Shore" triumphs. I wouldn't worry about that. There is a larger question: What is the future, what is the prognosis for serious classical theater, period? Shakespeare or O'Neill or Miller.

ME—Why not cut? Shakespeare gets cut.

DENNEHY—(mollifyingly) Yeah, sure you can. O'Neill is trimmed a great deal. There's so much repetition. He never came up with an idea he didn't want to repeat five times. But you have to be careful, because some phrases are historically powerful ... It still runs four and half hours. If done right, it only seems four hours and fifteen minutes.

ME—(with puzzled desolation) What's the appeal of O'Neill? Why do people love him?

DENNEHY—What's great about Chicago, about the Goodman and [director] Bob Falls: We always tried to do things that are hard to do. Hard to do, hard to watch. The audience has to bring its "A" game of serious theater-going. You don't just sit there and observe. You become part of the production . . . this is a tragedy in the deepest sense of the word. In fact, O'Neill jokes with the seriousness of it, the determination to be self-destructive, the self-importance that a self-destructive person creates around himself; "The universe is paying attention because I'm fucking myself up and what an incredible tragedy it is."

ME—( comprehension dawning) Yes! Tragedies are far better than "The Lion King" because you can fool yourself that you're doing something significant when of course—as O'Neill teaches us—all is bleakness and misery and failure. Is there no hope?

DENNEHY—The pipe dream is critical in his plays. Nobody gets through life without creating a bullshit world around them. What they do is they re-create themselves into some kind of person they have been or will be, and that's the way they live. The reality of life is too harsh. If you need booze, or if you need other people to believe that you are something you are not, all these things are drugs that allow a person to live essentially a fraudulent life. The only life any person lives with any happiness is a fraudulent life—the worst thing you can do to a human being is insist he gets rid of the fraud, accept your responsibilities and be the person you are."

ME—Thank you Brian. Goodbye. (Hangs up phone—to self). But why? Where did my O'Neill passion come from? (Dials telephone).

BIG SISTER—I remember the parents were going out. They said, "We'll see you." I told Mom I was going to watch the "Carol Burnett Show." And she said, 'You should really watch "Long Day's Journey into Night." ' Seeing Laurence Olivier—my life has never been the same. It was because of Mom.

ME—(hangs up, stung, blinking with surprise) I should have known. (Dials phone).

ME—Mom, hey hi, I was just wondering, why did you start liking Eugene O'Neill?

ME—(controlling a wild impulse to laugh) Oh! It always comes back to that, doesn't it?