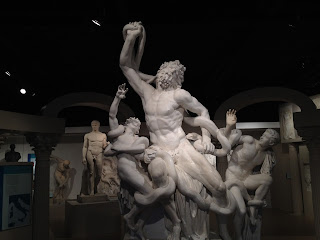 I'm off work this week, to try to spend some time with the boys, home from college. So I thought for the blog I would dig up a few columns from Christmas past. I noticed they fall into a kind of a theme, which I've dubbed, "Trouble at Christmas."
This one, from 2000, after a fall season spent in court fending off a street person who had chased me with a knife then sued me. I represented myself in court, for you fans of foreshadowing, and the case resolved itself right before Christmas, the judge dismissing the lawsuit, I noticed a little queasily, "with prejudice."
One final point worth mentioning, which somehow didn't make it into the story, is the helpful general advice my wife gave me when appearing before a judge for any reason: "If you have the option of either saying something or not saying something, whenever possible don't say anything." Smart advice, which I used when the guy failed to show up for a court hearing and I was tempted to observe, "I want to point out that he isn't in jail because of me" but wisely didn't.
There are 73,728 small squares on the ceiling of Courtroom 1501 in the Daley Center.
Not that I counted every square, waiting to stand before the bar of justice. I did the math. But I probably could have counted. I had the time.
I had never been sued before, and found the experience not only hour-devouring and distressing but, in an odd way, uplifting. Looking back over this year of Sturm und Drang (that's German for "moving to the suburbs"), the lawsuit stands out as a lingering piece of unfinished business I should confront before 2000 can be dumped, with a grateful sigh, into the dustbin to make way for a shiny, new 2001.
Being sued sucks. It is days in a windowless, airless room, somehow both too big and claustrophobic, waiting for your case to be called, staring dully at tiles on the ceiling, hearing the headachy murmur of legalisms just out of earshot, noting the starched exhaustion of lawyers, the unease of regular folk.
There are motions and counter-motions. Many times I recalled that Hamlet, listing reasons to kill himself in his famous "To Be or Not to Be" soliloquy, puts "the law's delay" up high, right after the pangs of despriz'd love.
Sure, I could have hired a lawyer to handle it all. But first, I'm too cheap. Second, I can't roll over in bed without hitting a lawyer. Third, I wanted to experience the thing, firsthand, to feel its essence. I won't go into the particulars of what sparked the suit. Like most of what winds up in court, it was ridiculous and peevish. Suffice it to say it emerged from what happened between myself and a young man in line at a drugstore. Words were exchanged. The guy pulled a knife and ended up hauled off in handcuffs by the cops.
As he was taken away, an officer said, "Be sure to show up in court or he'll sue you." But I didn't. He hadn't hurt me. I figured, in the scope of atrocities committed daily in the city, this little incident wasn't worth pursuing. I didn't want to waste my time or add to his woes.
There is no hell in Judaism, no divine punishment for sins. So I saw being sued as a minor form of punishment—a purgatory—for not listening to the police officer (always, always dear readers, listen to the police officer. They know).
The process was made almost worth it by the judge (and I'm not polishing apples since the case is—I think—over). The guy suing me didn't have a lawyer either, and didn't seem to grasp the fine points of the legal system, such as the need to show up. Despite my passionate desire to get this over with, I had to admire how the judge—whose eyes conveyed a seen-it-all-twice weariness—tried to cut this guy every break, so that the avenues of justice would not be denied a person just because he happened to be in jail the day his motion was dismissed.
The lawsuit ground on between August and early December. Quick for law. The odd thing was, as it progressed, I began to like the guy suing me. He had an Energizer Bunny doggedness I appreciated. Despite losing at each step, he pressed on, filing new motions, a Terminator of the Municipal Court.
After our last—one hopes, in law you never can tell—court appearance, we rode down in the elevator together. "Well," I said. "If I don't see you before Christmas—though if history is any judge, I will—have a merry one." He replied that he reads me in the newspaper.
I don't want to say that I'll miss court, because I won't. But I will cling to the lessons I've learned: Be unfailingly polite. Listen to the police. And forgive the people you cross swords with. So belated Merry Christmas and a Happy New Year, Mr. Guy-Who-Sued-Me. Among my usual lightly held New Year's resolutions is the iron vow to keep myself out of court, if humanly possible. You might consider doing the same.
—Originally published in the Sun-Times, Dec. 28, 2000
Posted by Neil Steinberg at 12:00 AM