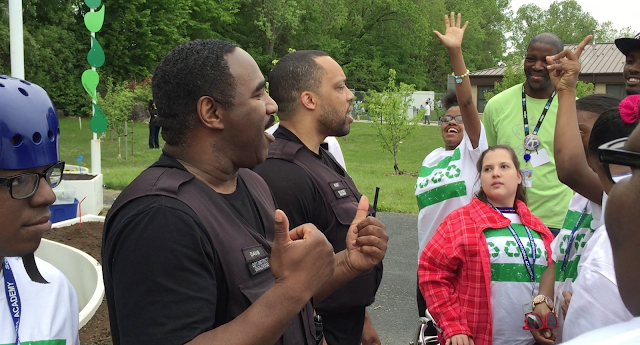 A piece of turf in Englewood. Young black men and women hanging out. And cops with dirty hands, planting something, then covering it up.
Familiar words. You think you know where this story is going. But you don't.
"My name is Officer Davis. I work at the 7th District police station," says David Davis, standing beside his partner, Ja'Lance Hunt. "Our mission is to protect and preserve life. We would be glad to answer any questions you have. We're here today to help you plant, to put the flowers in the garden today. We go to all the schools in Englewood and we plant flowers, but we also act as the police too. OK? So who's going to show me how to plant?"
It was a sunny morning in West Englewood last week at the Southside Occupational Academy High School, 7342 S. Hoyne, a school for students with disabilities. Southside Occupational is a rare Chicago public high school that has its own dog, Louie, a mini-Goldendoodle.
"Everybody knows Louie," says Joshua Long, the principal.
It was the school's Earth Day celebration, with outside activities: food grills, art projects and planting their school garden. Officers Hunt and Davis greeted one group after another with enthusiasm, placing tiny seeds into their hands, helping plant them into the rich earth and cover them up with dirt.
“You ready to do some gardening?” enthuses Davis.
God knows the Chicago Police Department would never invite press to such an event. It was The Kitchen Community, the foundation that runs 115 of these “learning gardens” at schools in Chicago. I might have declined the opportunity to drive to Englewood to watch kids plant chicory. But when Kitchen Community regional director Tovah McCord mentioned that police officers would be there helping, I decided to slide by. Though I confidently assured McCord that the police would never talk to me because, well, not talking to the press is what cops do. That’s what makes the whole “Code of Silence” flap so laughable. It isn’t just that police don’t talk about wrongdoing. They don’t talk about anything. It’s safer that way.
But Davis and Hunt didn’t seem to get the memo. They not chat easily with the students, laughing and hugging, but they even talk with me.
“It’s about building relationships,” says Hunt. “At the end of the day, it allows us to interact. For the kids, learning about growing healthy foods and the police coming out supporting that. It gives us an opportunity to plant, be interactive and do some positive things with the kids. It’s a win-win. It allows them to see us in a different light.”
Hunt and Davis are Army veterans and have been partners for 11 years. They worked with ATF, the FBI, and with gang crimes. Now they’re with CAPS.
“We did all the secret squirrel stuff,” says Hunt. “But nothing, nothing beats working with kids.” They also take students on college trips and visit schools to mediate tense situations before they become violent.
I tell Hunt I’m surprised to find officers who talk to the press.
“When you’re trying to do positive things . . .,” he says. “It’s bigger than us. These are future leaders.”
As a gardener myself, I know that not everything planted bears fruit. The trick is to keep trying.
“How do you effect change?” says Hunt. “You can complain. But what are you doing about it? You do it by your interaction. It starts with what we’re doing now: talking. It starts with your interaction with me. Now I don’t know what your past experience has been with the police. If nothing else, this is something different. Unfortunately, everything has always been negative. So it’s almost like there’s no good things happening, no good kids. You’ve got a lot of kids doing the right things as well as officers.
“We’ve been able to change opinions. How do we build relationships? What’s the best place to start? Schools. You get that many young ladies and young men in one place, it gives them the opportunity — their first time to ask questions and to understand the other side of it. We’re honest with them. We encourage questions. We go to the grammar schools, the little kids will ask, ‘Why you all shoot people?’ They have no filters. We always address the elephant in the room. You have to address it but not let it be the focus of what we’re talking about. It allows them to expand their minds.” 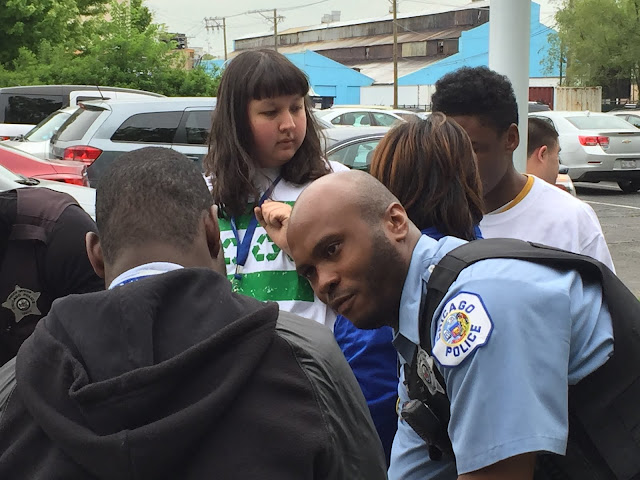