I bowed out of writing my usual Wednesday column, which is rare, perhaps unprecedented, for me. But this big Sunday feature I'm working on just won't gel, and I need to get it under control. Luckily, I have a number of Plain Dealer book reviews from the late 1990s all teed up and ready to go. Such as this one, reprised a little reluctantly, since it hoots at a book by James Finn Garner. Garner is a Chicago writer, and a Facebook friend, and I hope, should this find its way to him, he realizes, as they say in The Godfather, that this isn't personal. It's just business.


Give this much credit to all those UFO fanatics, millennium-fixated mystics and assorted true believers congregating at the edges of society, clamoring for a spot in the mainstream.
At least they're sincere.
Whichever ludicrous bit of doctrinaire ignorance they cling to, no matter what lunatic philosophy they arm themselves with against an indifferent cosmos, they inevitably seem to believe it whole-heartedly.
Until the next thing comes along.
Sincerity, in fact, is their problem. No iota of doubt troubles them, no hesitation enters their minds, as they endorse dogma that most rational people wouldn't consider in their giddiest moments.
An apt attempt 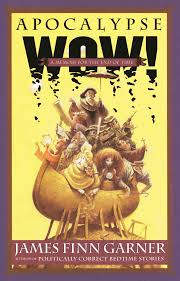 So it is perhaps apt that James Finn Garner, the Chicago performer whose "Politically Correct Bedtime Stories" trilogy sold millions of copies, attempts to deflate the entire realm of earnest gnostic hoo-ha with a blast of razzing insincerity.
His new book, "Apocalypse Wow!," is a sort of Baedeker of millennialism, delivered with more sly winks and elbow nudges than a season's worth of "Monty Python's Flying Circus."
"So slap on your rocket packs, kids, and come along as we try and figure out just what will happen when the year 2000 pounces on us ...," he writes. "All it takes to discern these mysteries is an open mind and a credulous nature."
Does it ever. What follows is a quickstep through the year 999, Nostradamus, papal prophecy, Millerites, global pole shifting, Jehovah's Witnesses, Edgar Cayce, tea-leaf reading, Atlantis, pyramids, UFOs and on and on.
Garner obviously doesn't believe a word of it, though at times his delivery is so dry he almost seems to. On the previous turn of the millennium: "Rivers swelled with floods greater than anyone had ever seen. Earthquakes split the ground and swallowed up whole cities. Epidemics swept through the countryside that put the plagues of Egypt to shame. The sun appeared twice in the sky. Fire and rock rained from heaven. Poodles walked on their hind legs and played the banjo."

Footnotes to humor
That last sentence is a joke, and in case we miss it, he has a footnote, "Just kidding. Banjos hadn't even been invented yet."
Now if this seems funny to you, go out and get Garner's book. For me, it quickly became tedious. So much so that I found myself mapping his sense of non-sequitur humor, which I diagram as: Fact A; Fact B; Fact C; a Banana.
Granted, Garner has chosen a tough topic for himself. The loopiness of the paranormal crowd makes them almost beyond parody. Not that American Indian rituals or anti-Semitic conspiracy theories are off-limits for humor. It's just that the payoff of Garner's jokes— "SATURDAY: Channeled a previous life as a peasant baby in 18th-century China. Died within two days from dysentery. Just our luck!"—doesn't seem sufficient reward to offset the grimness of the subject.
What the book could have used is some reporting. For a moment it seemed as if Garner was actually going out into the real world to encounter the odd people and beliefs he is mocking. And he may have. Or not, to use Garner's favorite blow-off shrug phrase. It's difficult to tell.
Humor is, if nothing else, a counterbalance to reality. By not taking a firm position, Garner slides into the very morass of muddy thinking he is trying to satirize. He accomplishes something I did not think possible: His hipper-than-thou smirking and indifferent wandering from subject to subject actually makes the tedious, stand-by-your-cult crowd seem, by comparison, to possess a sort of steadfast dignity.

—Originally published in the Cleveland Plain Dealer, May 11, 1997
Posted by Neil Steinberg at 12:00 AM