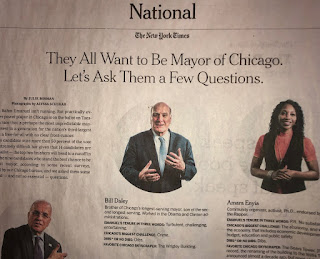 Election Day in Chicago. Finally something on the political scene to be grateful for, to give thanks that the clown car that for months has been pulling up at various forums, disgorging candidates—14, count 'em, 14 on the ballot—will finally be sent to the junkyard.
Not that it was always 14. It used to be more. In November, it was 21.  Easier to keep track of the Chicagoans who weren't running for mayor.
Fourteen, until this evening. To be replaced by two, Godzilla and Rodan, who'll immediately set to wrestling each other, rolling around on a scale model Chicago, crushing it to flinders, metaphorically. That battle to be determined by another vote in April.
Which two?
While we ponder that, the New York Times had a tell-tale effort in its Monday paper. A full page, asking "a few questions" to nine of the 14 candidates.  The article was telling for a variety of reasons. First, being the Times, it never explained why these nine, and what about the other five made them not worthy of the cut.
Second, each candidate was asked two semi-serious questions—to describe Rahm Emanuel's term in three words, and to name "Chicago's biggest challenge." Gentle pitches right down the middle. And two completely trivial questions: "Dibs or no dibs" and "Favorite Chicago skyscraper."
Meaning that half of the questions the Times chose to present potential future mayors of Chicago the day before the election were fluff. Kinda tells you where the Gray Lady stands on Chicago. A far outer borough joke to amuse its readers on a slow news day, as comic relief from actual issues.
For a moment I thought they also gave away the game by putting Bill Daley front and center, the favored candidate of Illinois billionaires and establishment publications in other cities. But a second look and I realized the Times lined up our would-be leader in alphabetical order, as if they were kindergartners, which does indeed make a certain sense.
The skyscraper question—a single click removed from the classic "If you were a tree, what kind of tree would you be?"—was also telling. Garry McCarthy, Paul Vallas, and Willie Wilson picked the Hancock Building, which the Times took pains to explain was renamed "875 North Michigan" last year (who knew?)
Amara Enyia and Susana Mendoza picked the Willis Tower, calling it the Sears Tower, of course.
I didn't realize real people actually liked these examples of brutalist giganticism. It's like saying your favorite flavor of ice cream is "cold." But nothing should surprise in Chicago politics. Daley said the first thing I completely agree with him about, picking the charming spun sugar Venetian wedding cake of the Wrigley Building as his favorite. Hints at a soul, which is par for the course. Bill always seemed the most humanlike of the Daley clan, the Daley most likely to fog a mirror. Or maybe the Wrigley Building just tested well.
Lori Lightfoot also picked a pair of buildings—the Wrigley Building is actually two buildings, with two different addresses, connected by a nickel sky bridge. She chose Marina Towers, which is defendable, in a retro 1960s way. Toni Preckwinkle, unable to color between the lines, picked the Cultural Center, noting its not a skyscraper. I suppose we should be glad she didn't pick pancakes, which are not a skyscraper either.
And Gery Chico picked the Daniel Burnham's Reliance Building—to be honest, I believe he deserves to be mayor for that choice alone. Apt yet not playing to the crowds, exactly the sort of independent thinker Chicago needs as mayor.
But I don't see Chico making today's cut. I'm normally not a fan of handicapping elections, but on my hobby blog, why not? All we can do now is wait, and the time must be passed somehow.
One slot belongs to Bill Daley, because of the mesmeric powers that the Daley name has over Chicagoans to vote against all common sense and their best interests. That and the enormous bucket of money he collected from the billionaires whose interests he'll put above all else, while running an endless loop of TV commercials claiming what a salt-of-the-earth Chicago guy he is.
The other ... I wish I could say Lori Lightfoot, based on the Sun-Times' powerful editorial lauding her lack of ties to the Old Guard.  But anyone young in her potential base in the African-American community would drift Enyia, thanks to the fluke of her Chance the Rapper endorsement or, if older, to Preckwinkle, whom I've said before I personally prefer, were the election up to me, which it's not.
Mendoza has promise, and I wish I could say it would be her. But a sick feeling that just came over me now, at this second, my fingers tingling on the keyboard: it will be Gerry McCarthy, simply because a Daley-McCarthy race would be so horrible it makes sense. A cruel joke disenfranchising two-thirds of the city's population and revealing the whole system as the bald lie it certainly is.
So that's my prediction—Daley v. McCarthy. Why? Because it's hard to go wrong in politics nowadays betting on the nightmare scenario.