Old Books from my Library #4: Webster's Dictionary of Synonyms.

We do not live in a time of nuance.
That might be the understatement of the year.
Gross insults pinball around Twitter. A hundred million blowhards firing their blunderbusses of bullshit in every direction as fast as they can load 'em up. Aiming is an esoteric nicety. Not to forget the ringmaster of our circus of naked spite, our president, who hourly issues statements that are monosyllabic and crude, fractured and false.
Then again, 1942 was not a time of nuance either, but of terror bombings and mass murder. We forget that, bad as this is, there are many Hells below this one, and 1942 was a deep and hot one. Yet G. & C. Merrian Co. of Springfield, Massachusetts nevertheless felt confident bringing out Webster's Dictionary of Synonyms. There words are defined, not singularly, but in context with each other, allowing for gradations of shading and significance to be discussed. Of course I love it.
What, for instance, is the difference between baggage and luggage? Never thought to ask, right? Turns out to be regional, at least once upon a time. 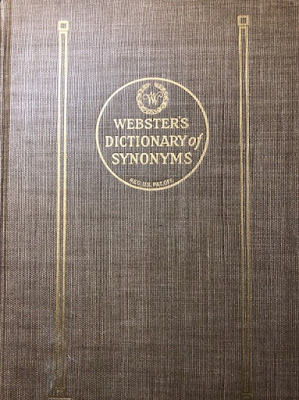 "Baggage is the usual term in the United States in the United States and in Canada, and luggage in Great Britain," the book explains. "However, baggage is occasionally used in Great Britain in its older sense of army equipment that is being moved (in a baggage, or supply, train) and luggage is coming into common use in the United States as a collective term for trunks, valises, suitcase, and the like."
The third term, impediments "is used humorously in all English-speaking countries for baggage or luggage regarded as an encumbrance," and since that is an dusty anachronism, as far as I can tell—at least I've never heard that usage—it is a reminder that the book is 77 years old, and thus limited in its trustworthiness, as its failure to include the current popular usage of baggage as referring to one's emotional and social past is an indication. I'd almost suggest that's the first definition, the answer to "I've got some baggage with me," being "Well, maybe you should see a therapist."
Despite this liability, just because a reference is dated does not mean it isn't useful, as any fan of Samuel Johnson's 1755 dictionary knows. The baggage definition goes on to include "Minx, hussy, wench," which would be useful in, say, critiquing the libretto of "My Fair Lady," where Henry Higgins sings, somewhat mysteriously to modern ears: "Should I take her in? Or throw the baggage out?"
Considering the way we media sorts have twisted ourselves into pretzels trying to find the ideal word to describe the president's addiction to saying things that are not true, I of course gravitated toward lie, falsehood, untruth, fib, story to see what illumination might be found there.
"Lie is usually felt to be a term of extreme opprobrium because it implies a flat and unquestioned contradiction of the truth, and an intent to deceive or mislead." That last part, intent, is key; the speaker's knowledge that what he is saying is false is essential for the lie, or as Webster's notes with an illustrative quote from Johnson: "He lies, and he knows he lies."
This raises a quandary. As frequently as I refer to Trump as a liar—it's one of the trio of essential qualities I use as a shorthand, "liar, bully and fraud" a synecdoche to represent his far flung galaxy of sins, I do sometimes sincerely wonder if I am being unfair. Does Trump actually know what he is saying is untrue? Or, indeed, does he know anything at all, or just randomly utter statements depending on the situation with no concern about their veracity or memory of contrary stands he has taken, sometimes minutes before? If he actually believes the veracity of whatever words happen to be tumbling out of his flapping lips or, more likely, spinning off his fluttering fingers, can he really be said to be lying at all? Is a lunatic who claims to be Napoleon lying? I'm not sure.
Falsehood is a much milder term, "not only less censorious than lie, but it is also wider in its range of application. The term may or may not imply sinfulness or criminality, for it applies not only to lies of any degree, but to fictions, such as literary fictions, polite fictions, some legal fictions, and the like."
Hmmm....the book showing its age again. I'm not sure "falsehood" would ever be applied to literary fiction anymore. It's just not the vernacular. But still, there is value here. For instance: "Fib is colloquial, often childishly colloquial, term for an untruth or for a trivial falsehood."
We might have struck on something. Except for the trivial part—Trump's lies are often vastly significant—the elementary of immaturity in "fib" might be just he thing for our current president.  Plus "fib" is very short: a good headline word. "Trump fibs rib libs" seems like a headline worth having in your back pocket for future use.
The problem with a book like this is knowing where to stop. The definition immediately above lie also applies to our current political scene: lickspittle, defined as "parasite, sycophant, toady, hanger-on, leech, sponge, favorite."
But were I to start trying to suss out whether Rudy Giuliani is more of a sycophant or a toady, or whether Alan Dershowitz is better described as a hanger-on or a leech, we'd be here all day. And the point of these is to do less work than my actual newspaper job, not more. I think it's about time to get back into the paper. This relaxation is hard work.
Posted by Neil Steinberg at 12:00 AM