A good writer channels the zeitgeist, the tone of the times. With August ending and the summer winding up, I detected a certain nameless sorrow in the air, which Caren Jeskey names in her post today. 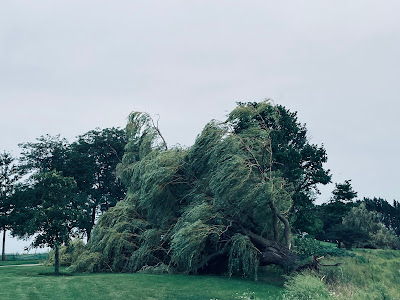 It is a willow when summer is over,
a willow by the river
from which no leaf has fallen nor
bitten by the sun
turned orange or crimson.
The leaves cling and grow paler,
swing and grow paler
over the swirling waters of the river
as if loath to let go,
they are so cool, so drunk with
the swirl of the wind and of the river—
oblivious to winter,
the last to let go and fall
into the water and on the ground.

We came across an enormous fallen weeping willow on the Northwestern University Lakefill in Evanston. Even laying down, her presence was mighty. Then it sunk in. She’s dead and will never come back. It seems so many things are slipping through the fingers as easily as grains of dry sand these days. Or has it always been this way, and the fact that I am aging, along with the shadow of death that shrouds us is tinting my lens towards a sense of inescapable loss?
On my morning walk I was crossing Lawrence and Leavitt with the permission of the little white glowing person in the traffic light box. Suddenly a white Jeep SUV decided to jump into the bike lane, pass the cars waiting to go east on Lawrence, run the solidly red light, and come a foot or two from hitting me. His windows were down and the driver, a young man, looked over. Our eyes briefly locked. He may have shrugged. He didn’t miss a beat, and continued barreling down the street. Other drivers held their hands up and shook them in dismay in my direction as a gesture of solidarity. My next thought was “I could have just died.” 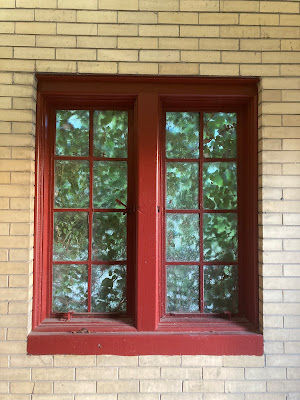 The other day my brother— who moved away to the glistening West Coast before he was 20— commented “looks like we’re going back to the bad-old days in Chicago.” He was referring to the peak of murders in the city in 1974, when the number hit 970. A quick Google search shows that we are, in fact, going in the wrong direction. We had 506 murders in 2019 and an uptick to 774 in 2020. A crying shame.
I am loath to admit I have not been feeling very safe since my return to Chicago in May. I almost never feared for my life in Austin where I lived for seven years. It felt so good to know that the chances of a random act of violence towards me were slim to none there. Here? I’m not so sure.
I used to traverse the city with wild abandon, and those days are over. I find myself being hyper-vigilant, whether walking or driving, especially since I am usually alone. I have been harassed countless times on my walkabouts, which is to be expected. That’s just what a lot of guys do when women are alone.
Yesterday a man biked past me on the sidewalk, way too close, a cigarette dangling from his lips. He turned and said hello. I held a “don’t mess with me” look on my face and immediately crossed the street where there were a few other pedestrians. I looked back in his direction to gauge my safety. He had stopped his bike in a driveway and was looking back to find me. Ha ha. I was gone. He quickly realized I had fled and he sheepishly biked away.
Ever since I was a kid growing up in the city I’ve had to be very savvy about my safety, and as a result I have only been assaulted by strangers twice. The first time in the '90s at the Belmont red line the guy managed to grab me. I knocked his hand away and used my voice to bellow at him. Fortunately there were cops with dogs downstairs and he was promptly arrested. My father came to court with me and the guy got community service, plus time-served. I hope he cleaned up his act after that, but who the heck knows.
The second time was near Foster Beach, and fortunately I had just taken an Impact class and knew what to do. I got away. When he was arrested a month later after a friend and I spotted him at the lakefront, I learned he had 18 previous convictions for assault on his record. He did not show up to court so continued to roam the streets.
I stay away from local news these days because whenever I read it I become more scared. Carjackings, shooting on the expressways, and other crime seems to be out of control right now. I just hope that you, me, and everyone we know remains unscathed. Additionally I plan to use my voice and ballots to affect change in any way I can.
I kept walking away from the runaway Jeep on Lawrence after the near-miss, and found myself in a field of trees. I ducked under the canopy of a healthy willow tree, and the world felt right. I found bright orange pinecones and a prairie grass trail. I saw vibrant mushrooms popping up around tree trunks, and got a second cuppa joe at one of the plentiful and tasty coffee shops in the area. I bought some meatloaf and a Sprite for the guy who lives on the bench near me.
Women in Afghanistan are being terrorized, humans seem to be such a threat to each other, and I feel helpless in so many ways. I realize how easy I have it, and I am grateful. I will continue to find beauty where I can, and stay focused on continuing to create a meaningful life during my limited time here on the planet.
Posted by Neil Steinberg at 12:00 AM