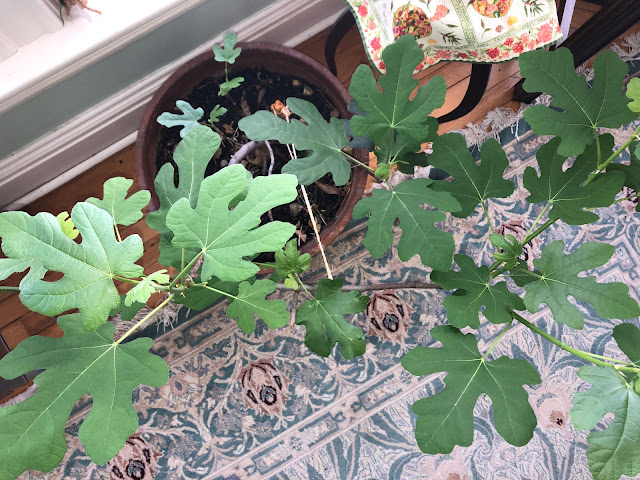 One drawback of only going into the office every few months is that you miss out on seed catalogues. If you haven't seen a seed catalogue lately, they are no longer modest affairs listing various types of flower and vegetable seeds for sale, but glossy, expensively-produced celebrations of lifestyle and philosophy and nature—think Vogue magazine, but for produce—that create this entire world of beaming, gorgeous children and barefooted Earth Mother types emerging like Venus from rustic farm buildings, carrying wicker baskets bursting with cornucopias.
I'm usually fairly immune to this kind of thing, flipping through more out of idle curiosity.
But three years ago I was leafing (sorry) through the Baker Creek Heirloom Seeds catalogue, ogling the Kyoto Red Carrots and Mary Washington Asparagus, when I noticed the "Chicago Hardy Fig."
I couldn't resist. You can get the full backstory here.  They sent me two seedlings, thank God, because I credulously planted one outside (Chicago Hardy Figs, remember?) And the bag said they were good in Zones 5 through 10, and Chicago is on the northern border of 5, meaning we should just get in under the wire. I glossed over the part about planting it in pots and dragging the pots into shelter for the winter, as well as the line "These tender young plants generally have no resistance to cold," Rather explicit, now that I look at it.
The first winter turned one of the CHF into a blackened stick. Suspicious soul that I am, I dragged the second CHF inside before the frost, just in case, where it wintered upstairs in my office next to my desk. Each spring for two years I muscled it outside. Last summer, sitting next to the front steps, it squeezed out two small green figs that I knew better than to try to eat.
This year I was a little worried. It had grown bigger, maybe two feet tall, and after I brought it in, to the dining room—in a bigger pot. I wanted to give it as much room as possible. So a terracotta pot as large as it could be and still move. Taking it upstairs was out of the question.
When I first moved it into the dining room, just before the first frost of November, the shock of moving—or because it was autumn—turned all its leaves yellow.They all fell off except one, and I worried I had killed the thing, or that it was infested, investing in some expensive anti-bug leaf soap that I carefully spritzed on each leaf. 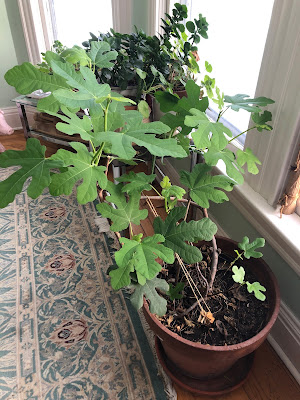 For  a month it sat leafless. But I kept watering and hoping and look at it now, above. My Chicago Hardy Fig keeps on pushing out these enormous vaguely hand-shaped leaves and, well, it's February and freezing outside, but my CHF is putting on a botanical show that I had to share. Maybe that's where its name comes from—the thing keeps pushing. (Actually, it seems that the plant became popular here). I have a good feeling about the future of my CHF.
Or should I say our Chicago Hardy Fig, speaking of sharing, as my wife has practically adopted it. I tried to water it Monday morning and she all but yanked the watering can out of my hands with the snarl of an angry she-lion protecting her young. She would take care of it. Didn't want me overwatering. I had already killed one.
I did some reading, and the CHF can grow 15 feet tall and a dozen feet wide, which ought to provide some interesting dinner party conversation. I haven't told my wife that part yet. The tree seems to want to grow horizontally, and I'm trying to use a few notched sticks to encourage it to grow upward. They'll also kick off 100 pounds of figs with "sweet and juicy with a rich, honey-like flavor." Something to look forward to.
Posted by Neil Steinberg at 12:00 AM