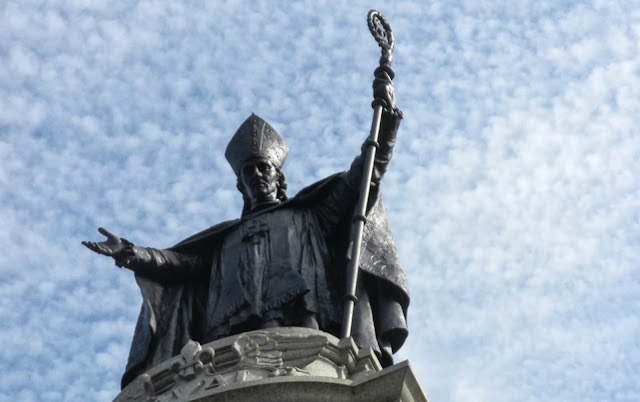 Pope Francis' interview with an Italian Jesuit magazine, publicized last Thursday, did not itself change anything. But for many faithful waiting for a sign that the church is finally perceiving modern morality, a little, and with a secular community tired of having religious dogma given a veneer of faux rationality and forced upon non-believers through the laws of their countries, it was a welcome sign indeed. Change is tardy, and slow, but also possible.


There was a time when I worried that Judaism was becoming a death cult. That the Holocaust had permanently deformed the religion and too much attention was being spent on the horrors inflicted upon the Jewish people during World War II, to the detriment of those alive now.
Part of that might have been transference — persecuted people tend to adopt diluted versions of the views of their tormenters. And just as blacks can be prejudiced based on the shade of each other’s skin, so a bit of the hand-flipping dismissal anti-Semites direct toward the Holocaust might have leached into me.
But some of that feeling was legitimate. Remembrance is one thing, obsession another. There is only so much atrocity you can stomach, and I wasn’t comfortable with a faith that alternated between keening past horrors and moonlighting as the de facto tourist board for the State of Israel.
It was a question of balance. That’s why I was glad when our family joined a reconstructionist synagogue — Shir Hadash, which means “a new song”— that approached the religion as if it were actually something joyous and alive, with less frequent forays into the abattoir of the past.
Each religion has a lot of stuff in it, and so the faithful of any stripe must pick and choose. You can’t emphasize everything. That’s how I interpreted Pope Francis’ surprising remarks, made public Thursday, about abortion, gay marriage and contraception. No interpretation was necessary, actually; that’s what he said, clearly and precisely.
“It is not necessary to talk about these issues all the time,” he told an Italian Jesuit magazine. “We have to find a new balance.”
The entire interview is worth reading. The pope wasn’t signaling any sea change in church doctrine on these hot-button issues (in fact, he felt the need to denounce abortion the next day, as symptomatic of a “throw-away culture”) but rather a shift in focus. He was only saying what is manifestly true — that the leadership of the church, aided by knots of revanchists, has gotten out of step with the faithful, never mind the mainstream culture, and if the church doesn’t want to eventually “fall like a house of cards,” it has to return to what the pope called the “freshness and fragrance of the Gospel” and strive for something “more simple, profound, radiant.”
In short, it was a message of love, the agape love of God that is supposedly behind every religion.
This of course is at odds, intentionally so, with those who wake up in the morning to shout that the children of gay marriages do not really belong to families, that women who have abortions are murderers and those who practice contraception are sticking their thumbs in God’s eye. They had been calling for Francis to comment on these matters, and now he has. Be careful what you wish for.
Chicago’s Cardinal George yielded the field on this one, issuing a statement Friday that lauded the pontiff’s “beautiful reflection” while letting its substance go by.
The cardinal’s tact gives rise to hope that those who view their Catholic faith as a bludgeon might be given pause. A bit of hope. Papal infallibility only goes so far, and it will be easy for some to shrug off the current pontiff as an aberration and wait for the next guy, hoping for another Benedict XVI-style “my way or the highway” papacy.
They will not see this interview for what it is — a baby step away from the dead end the church has long been marching down, a chance to wrest the faith from “those who today always look for disciplinarian solutions . . . those who stubbornly try to recover a past that no longer exists.”
Those folks will have their say. The word they use for my views on the subject is invariably “bashing,” and no amount of praise for the parts of the church that aren’t trying to use the government to impose doctrine on unbelievers will matter. I like to point out, though, on general principle, that the church does and always has done wonderful things, including keeping the flame of knowledge alive when the world went dark. Anybody who reads ancient philosophy has 500 years’ worth of Catholic monks to thank that these texts didn’t turn to dust in 1354.
That’s because for centuries the church chose to respect doctrine that was inimical to what it believed, a balance that the pope obviously wants back (asked who he was, Francis said, “I am a sinner.”)
Like Francis, I would hate to see the church reduced to the things it is against. His words are a challenge to those who want to close the gates, draw up the drawbridges and toss the troublesome over the wall.
“We must not reduce the bosom of the universal church to a nest protecting our mediocrity,” he said. And let us say, “Amen.”