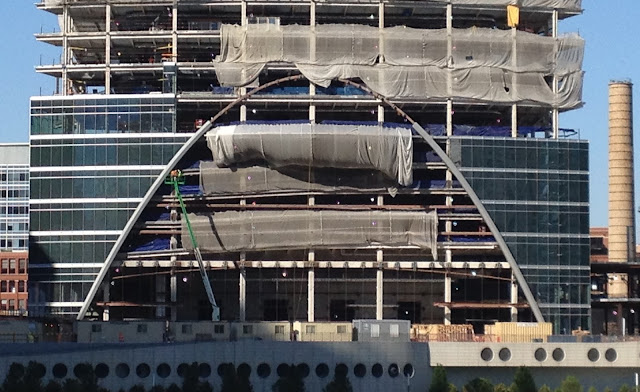 Plunging into all things parabolic for today's column proved too much fun to let the matter drop, so I'm using it to kick off an occasional series I'm calling "Chicago Shapes" that will continue, now and then, until I run out of shapes to write about. Tomorrow: The Circle.

"Cool parabola," I thought, when I first noticed this arch traced across the front of River Point, the new 52-story tower going up at 444 W. Lake.
A very 1950s, Jet Age shape, the parabola, defining the curve of a rocket in flight, "Gravity's Rainbow," to use Thomas Pynchon's wonderful phrase, the title of his dense, 1973 masterpiece that uses the parabola as a metaphor for fate, for the arc of life's, the upward spring of youth, the downward pull of age:
"But it is a curve each of them feels, unmistakably. It is the parabola," Pynchon writes. "They must have guessed, once or twice — guessed and refused to believe — that everything, always, collectively, had been moving toward that purified shape latent in the sky, that shape of no surprise, no second chances, no return. Yet they do move forever under it, reserved for its own black-and-white bad news certainly as if it were the Rainbow, and they its children...."
"No surprise, no second chance" — that sounds about right, to a guy in his mid-50s, about 2/3 the way across his own life's parabola, in the descending part of the curve, hurtling toward the Big Splat.
Not that you need gravity to make a parabola. There are other ways. Math will do. A parabola also represents an algebraic equation, plotted out on an x/y axis.
For instance, here is a graph of the equation y=6x²+4x-8, a curve very much like the arch at 444 W. Lake, only flipped upside down: You can also slice a curved 3-dimensional geometric figure, such as a cylinder or a cone, like this: 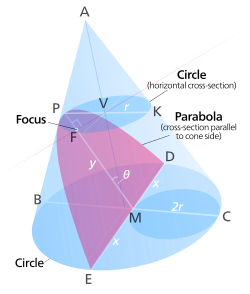 That's how they came up with the parabola at 444 W. Lake, as I discovered after I phoned the building's designer, Connecticut architectural firm Pickard Chitlon and spoke with Anthony Markese, one of the firm's principals, who was happy to hear from his home town. "I'm actually a suburban Chicago boy," said Markese, who grew up in Schaumburg "pre-mall."
How did you decide to stick that parabola there?
"The parabola form at the base of the tower and the top of the tower come from the building's response to the site," he said. "If you look at the building through Google Earth, one of the really interesting things about the site is a major portion of the Metra tracks run right through the site. The piece left to build on is a funny wedge shape left between Lake, Canal and the tracks."
Not only did the site pose a significant engineering challenge -- the building had to be constructed over operating train tracks— but it also suggested the shape of the building.
"What fit well in there in terms of the tower plan was the kind of curved cut football shape, the elliptical shape the body of the tower is," Markese said. "We started looking at how to make it more elegant, how to make it meet the ground plane. One way we came up with is to cut it, If you take an extended ellipse, and make a cut, you are left with that parabolic form."
That seemed right, aesthetically.
"The idea of this grand arch that looked out to the river seemed really compelling to us," he said. "Sort of a ceremonial archway one could look through the lobby plaza out onto the river."
You can't see it yet, but the shape will be echoed at the summit.
"The top of the building has a series of cuts as well, lower parabola, dips downward to create another ellipse shape at the top of the building." he said. "The whole language of the building comes form cutting the building's surface for a variety of parabolic forms."
Markese said parabolic shapes will also run through the pathways in the green space, and elsewhere.
"Once you start with an idea you try to run that idea through the building, to knit it all together," Markese said. "It seemed to fit the flowing nature of the river as well, a confluence of the three branches, curves against curves, a nice open sunlit area of the city."
In that sense, it sort of mirrors the iconic green curved 333 W. Wacker building cross the river.
"That building does a beautiful job bending around from one branch to another," he said. "We were very conscious of that, to have two curved buildings create this sort of flowing gateway to the south, quite beautiful and elegant. We very much had 333 on our minds when looking at this building."
Making a large steel parabolic span like that and having it mesh seamlessly into the building took some computing power."Most of the parabolic shapes are framed with large curved bent steel beams, and we were pushing the envelope of a steel a bit," Markese said. "Marrying the steel, concrete and glass in a smooth way took a lot of computer time."
That, he said, represented the most advanced aspect of the building.
"The real change in technology was in computer software," he said. "We and the rest of the design team used to plot out those complex curves. All the surfaces come together in smooth, uninterrupted curves. All those surfaces have to have gutters to drain water, heat tracing to melt ice, and we had the ability to think about all that with advanced computer technology...10 years ago that would have been much more difficult."
Do you worry, I wondered, that all these design nuances will fly past Chicagoans who will just see the parabola and think, "O00, 1950s retro."
"I never thought of it as retro," Markese said. "Some people will look at the arch and not know any better. But it still looks fresh and modern. It's really more a geometric exercise."
As is life. Geometry and math and physics. Writing about the design of the building as it goes up, I couldn't help but imagine some journalist in 22nd century Chicago digging the column up to celebrate the building as it goes down.
"Because the given must be taken," the poet Philip Levine writes. "Because each small spark/must turn to darkness."
Or, like the old saying relates, less poetically: What goes up must come down.