Saturday fun activity: Where IS this? (Special Bubbly Creek edition) 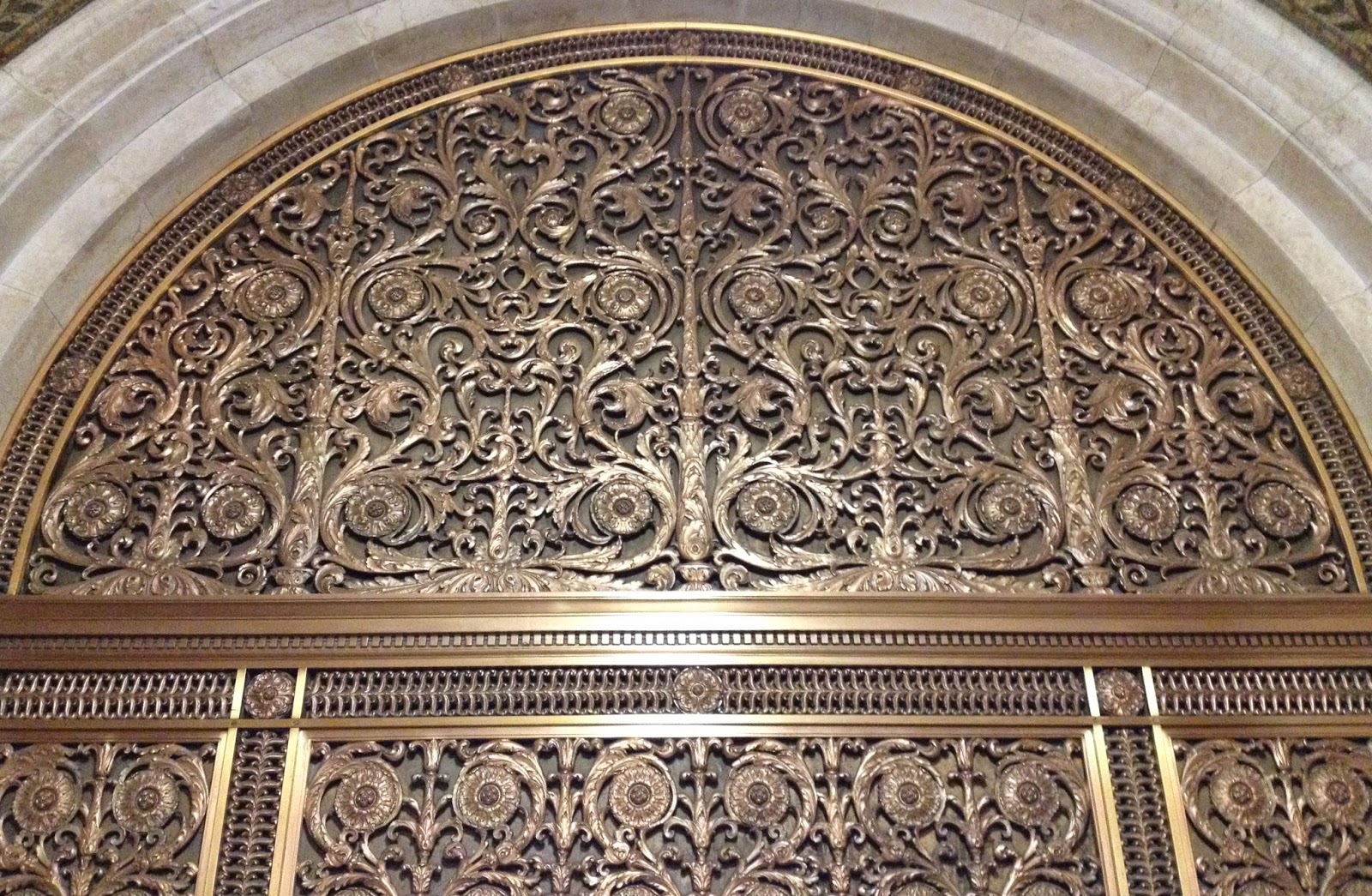 It's Saturday, time to give away some delicious Bridgeport Bubbly Creek Blend Coffee.
But first, a subject I've been promising to address for weeks.
Bubbly Creek coffee.
Okay, class, who can tell me anything about that name? Anybody?
Sigh.
Chicagoans with a historical bent might know, "Bubbly Creek" is the name given the foul sewer of 19th century liquid offal that ran through the near Southwest Side.
Upton Sinclair describes it in 'The Jungle':

"Bubbly Creek" is an arm of the Chicago River, and forms the southern boundary of the Union Stock Yards; all the drainage of the square mile of packing-houses empties into it, so that it is really a great open sewer a hundred or two feet wide. One long arm of it is blind, and the filth stays there forever and a day. The grease and chemicals that are poured into it undergo all sorts of strange transformations, which are the cause of its name; it is constantly in motion, as if huge fish were feeding in it, or great leviathans disporting themselves in its depths. Bubbles of carbonic gas will rise to the surface and burst, and make rings two or three feet wide. Here and there the grease and filth have caked solid, and the creek looks like a bed of lava; chickens walk about on it.

He goes on, but you get the idea. All told, not the name that I would give my brand of coffee, despite its local historical, umm, flavor.
And as grateful as I am to the Bridgeport folks for supporting my blog, I wouldn't be who I am if I didn't look my gift horse in the mouth and wonder, aloud, "What's with the name?"
To be honest, when I first heard it, I thought of Stephanie Izard's short-lived Mediterranean restaurant which she rashly named "Scylla," not realizing—until I told her—that she had named her place for the "yelping horror" of "The Odyssey," a "grisly monster" to be avoided at all costs. Circe explains to Odysseus:

No one could look on her with any joy. She has twelve legs, all writhing, dangling down, and six long swaying necks, a hideous head on each, each head barbed with a triple row of fangs, thickset, packet tight -- armed to the hilt with black death! . . .

But the goddess isn't quite done yet. She continues:

Scylla's no mortal. She's an immortal devastation, terrible, savage, wild. No fighting her, no defense -- just flee the creature, that's the only way.

Can't you just see that in an ad? "Outstanding" -- Mike Sula. "Terrible, savage, wild" -- Homer.
Bridgeport Coffee, to their credit, doesn't flinch at the name, but addresses the subject boldly on its website,  under the heading, "About the Name Bubbly Creek"

The idea of naming a coffee blend Bubbly Creek Blend came when we met the founders of the regional environmental organization, The Wetlands Initiative. In 2008, The Wetlands Initiative had proposed a project that would have converted Bubbly Creek to a wetland complete with viewing gazebo. I decided to create a blend that Bridgeport Coffee could use to not only bring the issue of urban pollution forward, but also to offer financial support for this new, local organization.

So it was for a good cause. You can read the full statement on their website here.

They also name their coffee soda -- I'm dying to try it — "Bubbly Creek," which has a nice double meaning, evoking both history and carbonation. The question I had for owner and roastmaster Mike Pilkington, is: any regrets about the name? He replied (again at length: there's something to this topic that seems to encourage verbosity; maybe it's the caffeine):

I don't regret the decision at all. The name has not only forced me to stay informed regarding our small part of Chicago's waterways, but has also allowed me to get to know the work of The Wetland's Initiative.

Although I am not a political insider and don't know the entire truth, there is, I believe, many reasons to be hopeful about the future. Although little will be done until at least 2017 when the first phase of the reservoir catch basin will be completed (as you probably know waste water runoff is still dumped into the river including Bubbly Creek during very heavy rains), I believe there is the political will to clean our river. I want to capture this hope with our new packaging in development now.

A young graphic designer came to our team with a boy fishing on the creek.When I saw the idea, I immediately rejected it. In my email to our Director of Marketing I said, "I have confused him, doesn't he get who we are?" As I slept on the idea, it occurred to me that the history of Bubbly Creek as is widely known was written by Upton Sinclair over 100 years ago.In fact, some of Bridgeport's history, although seems recent to me, is quickly becoming the past. If you could see the change, the diversity, the tolerance. A rowing group on Bubbly Creek? a boathouse?, three art galleries on Morgan Street, two artist colonies (one right on Bubbly Creek), Pleasant House Bakery, Marias. Next year Morgsan Street is getting"Streetscaped" by the city. In the Back of the Yards- The Plant- where Talapia are farmed in an enclosed eco-system where urban farmer groups are growing and distributing organically raised vegetables... I called my Director of Marketing the next morning with a directive to incorporate the hopeful message of what our community can be and will be. The boy fishing on Bubbly Creek will appear as an icon in our new packaging. The package itself is a new product called Biotre. It is heat seal-able and entirely compostable-we will also be using the label to hold the bag tight, eliminating the twist tie. 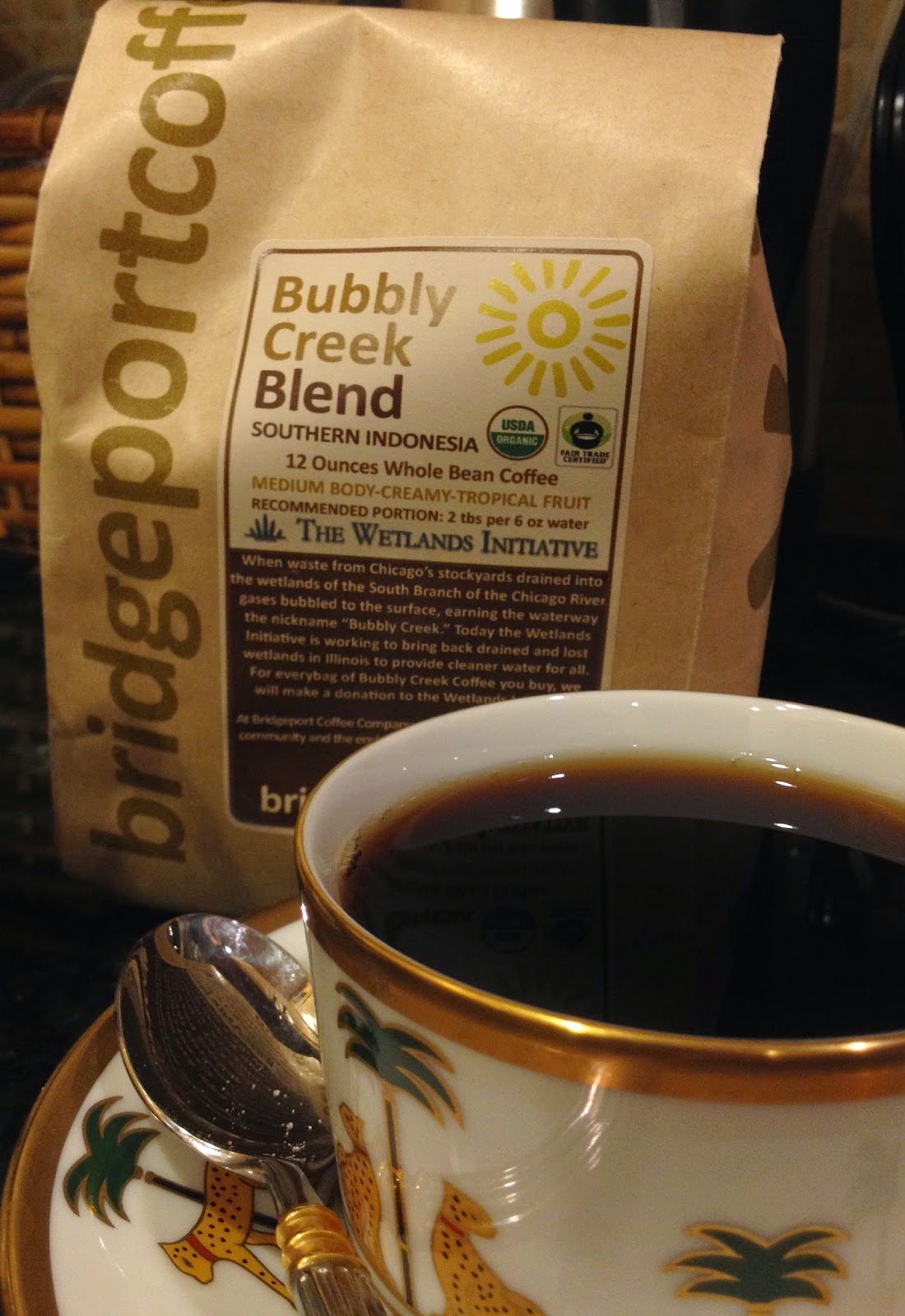 Not only did I learn something from Mike's reply—companies are still dumping stuff into Bubble Creek. But by the time he was done I had an impulse I've never had in my life: "Man, I'd love to live in Bridgeport." He made it sound so appealing.

Which is still all beside the point. The only important thing, to me, is this: the coffee's really good.

It doesn't really matter what you call it, and, given the utter lack of historical knowledge that most consumers have, you could name it "Pol Pot's Pot o' Gold Blend" and nobody would think twice about it. I brew up a big pot of Bubbly Creek almost every morning I'm home, and feel a pang whenever I give a bag away, because that's one less bag for me.

But give it away I do, at least today, to somebody who places the lovely grill above, which certainly dates to the heyday of Bubble Creek—assuming we aren't in it right now, regarding a very different sense of the word, one that I believe we can stop talking about now. Names can be repurposed after all, and are allowed to mean very different things in different contexts. Think about "Lincoln." What connotations does that word have? Severe eloquence? Folksy homeliness? Early tragic death? Stovepipe hats and whiskers? The Ford Motor Company has used "Lincoln" for its line of luxury cars for nearly a century and done just fine with it. I'm sure Bubbly Creek Blend Coffee will do fine as well.
Remember to place your guesses in the comments section below. Good luck.

I've decided, when the location is solved, which it always is, to provide a broader context. So if you want to read people guessing, and not know, skip to the comments now.

The location, as guessed by Peter, is the County Building (some people think of it as City Hall, though, technically, the eastern half of the building belongs to Cook County). It isn't the elevator banks, but a grillwork around the corner. Here it is in its setting. 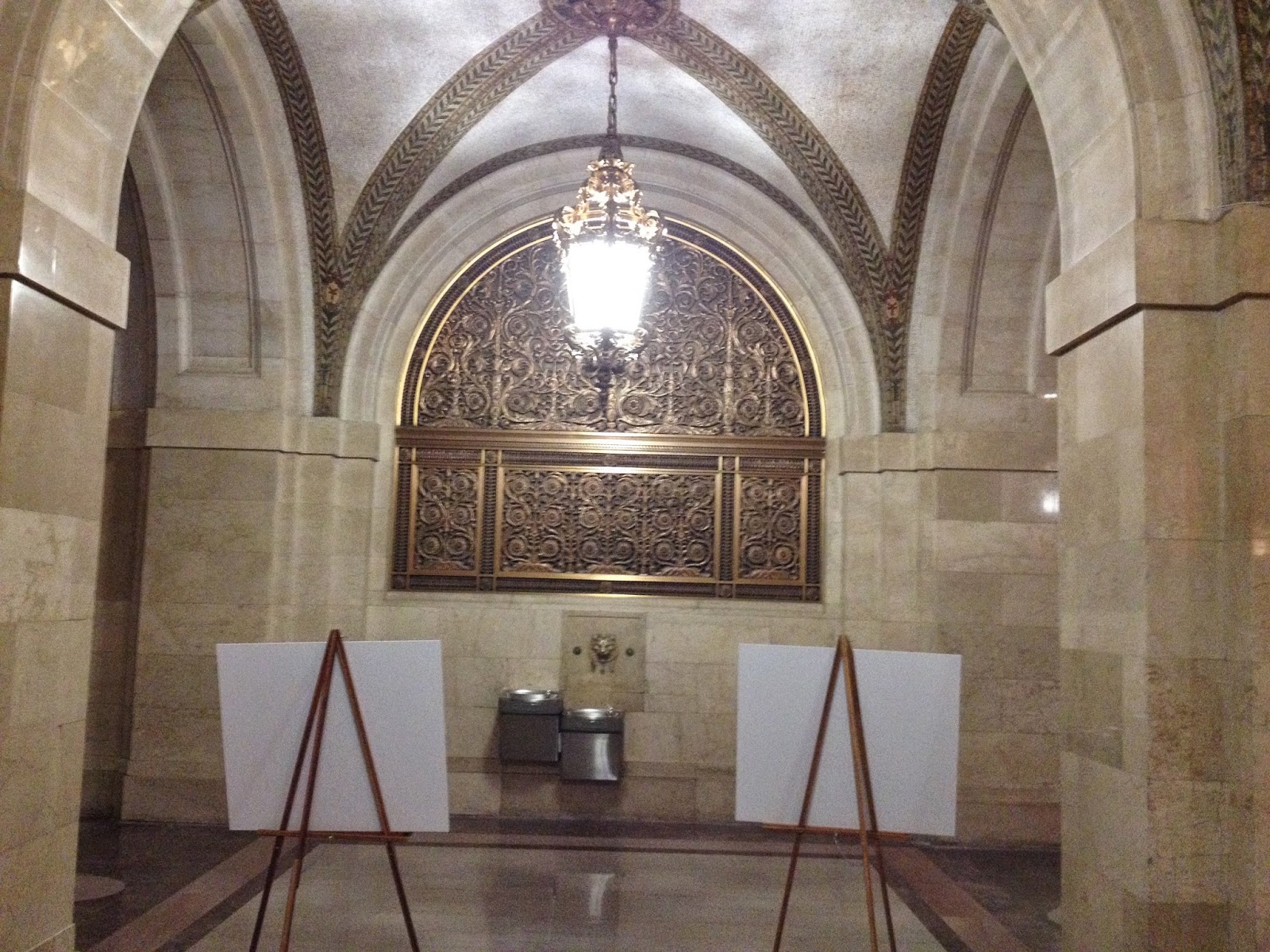