When I wrote about Leonard's Bakery in Northbrook earlier this week, the most interesting part never made it into the piece. The owner was not particularly chatty, so I ran Leonard's through Nexis, thinking there must be press on it. There wasn't. Not a word, ever, by anybody, over the past 20 years. Which is a shame because the place really is a treasure. Maybe I'll spend the day there for its 30th anniversary in August.
Well, there was one thing. This, written by me four years ago. I like how I contrasted my real-life emails with the upper echelon moral squishiness of a Tribune panjandrum.
There is an interesting typo in this—what I call a "brain cramp." When I refer to "rugellah," which are sweet little pastries of cinnamon and raisins, I'm actually thinking of "mandel bread" which are, like I describe them, soft versions of biscotti. 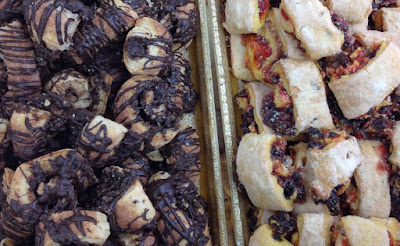 Would you be interested and available to speak to the JCC Women's Auxiliary Luncheon on Wednesday, September 5th at Birchwood Country Club in Highland Park? The topic would be politics. Love to have you! Please let me know.
A funny 2006 "Saturday Night Live" bit begins with Steve Martin on his cellphone. "I'll be home by morning," he says. "I'm just doing this, uh, corporate gig . . . I don't know, some corporation." Then his hosts enter the room. "We are so excited to have you here," says one. "This is a great day for Hamas!"
"Hamas?" says Martin, in a small voice.
Martin isn't so sure he's the right guy to perform at "Hamas — a Victory Celebration." But the money is so huge he can't say no. And his hosts try to reassure him. "You are a hero here for your comic genius, your ability to play tender moments, and your well-known hatred for the state of Israel!"
Life imitated art this week when Chicago Tribune columnist and editorial board member Clarence Page found himself in hot water for accepting $20,000 and a trip to Paris to give a three-minute speech before a suspected Iranian terrorist group. He says he had no idea whom he was talking to until he got there.
That seems curious to me, having just gone through my own delicate if infinitely more low-rent negotiations for a talk. Forget Paris. I wouldn't go to Highland Park without knowing what I was getting myself into.
"Politics" is sort of a broad subject. Anything else you can tell me about the talk? How many people do you expect?
I should mention that, on rare occasions, I've gotten what I considered a hefty amount of money; Elmhurst College once paid me a few thousand dollars to deliver a lecture.
We usually get about 50-70 to attend. Although, you could be a big draw. We'll give you lunch if you like. The food is very good
Though I prefer to get paid, I often end up speaking for nothing, or whatever token the group wants to give. The Rotary gave me a lovely date planner. Twice. I've been given potted plants, paperweights. A synagogue once offered a plate of ruggaleh — think biscotti, only softer and Jewish — which then became my gold standard of excellence.
Hmmmmm . . . I try not to speak for free. Do any of your ladies bake? I'm a sucker for ruggaleh . . . if you can have someone bake a plate of ruggaleh, we have a deal.
The key question is whether speaking fees constitute bribes. People doing unethical things try to ritualize them — in the old days, crooked pols ran insurance agencies and anyone wanting to corrupt them bought a hiked-up policy. A similar scam would be: speak to us, we pay you a huge fee, and nobody has to accept envelopes stuffed with cash.
The issue isn't bias. You can argue that Page — who, I should add, I've never met and rarely read — is in the bias business. He isn't paid to be neutral, but to give his opinions. The question is transparency — the idea is those opinions are based on his honest analysis of the world, not a $20,000 check cut to him in secret. That's why the Tribune has its policy, although it seems odd — they aren't against their writers taking money, per se, they just want to sign off on the transaction.
To me, bias is on the page. You can be Simon Pure, you can send back the promotional pens sent to you at Christmas, and still let your personal prejudices ruin your work. Or you can be a cauldron of rigid notions, but set aside your own feelings — I wrote Ronald Reagan's obit for the Sun-Times and I despised Reagan. But the piece was fair and respectful and nobody complained.
Ingratitude is a writer's best friend. I like to think that if Elmhurst College started, oh, refusing to admit black students, I'd leap upon them with a snarl, and not pause, thinking, "Gee, but those are the nice folks who asked me to give an Andrew Prinz Guestship Lecture for Political Awareness." I'm hard on Northwestern, and it gave me a scholarship.
Neil — We will pay you! We are not asking you to speak for free. I will get you a pound of ruggaleh fromLeonard's Bakery in Northbrook. Would $300 do it?
It seems odd to even have this controversy in the era of Citizens United, when corporate money is deluging the American political process. I have sympathy for Page. One moment you're living the high life in Paris. The next your boss has you kneeling on a rail. Par for the course, that journalists still get in trouble for the crumbs that come our way. Of course, $20,000 is a very big crumb. A lot of money, though still too cheap a price to sell your reputation. But isn't that always the most shocking aspect of scandals? The smallness of the stake. Postage stamps, crystal. My guess is that 20 grand will look less and less to Page as the years go by. Not to be on a high horse. I might have grabbed for it, too. People tend to take what they can get.
$300 is good. I've written you guys down for Sept. 5. You can skip the ruggaleh if you like.