In addition to April 4 being the 50th anniversary of the murder of Martin Luther King Jr., it is also the fifth anniversary of the death of Roger Ebert, the admired film critic of the Sun-Times. If you are wondering why I'm remarking on one rather than another, it's that I looked back over what I've written over the years about King and was not impressed by anything in particular, considered what I might add to the already extensive conversation now, and decided my thoughts were too scattered to bear sorting out.

On the other hand, this obituary, I believe, bears re-reading, because it reminds us that in addition to changing the way America watches film, Ebert also had an important role—perhaps an even more important role—in changing how we think of sickness and disability. It was the single most read story the Sun-Times posted in 2013, and while at first I thought "save it for 2023," my second thought was, "post it now; maybe you won't be writing this in 2023." 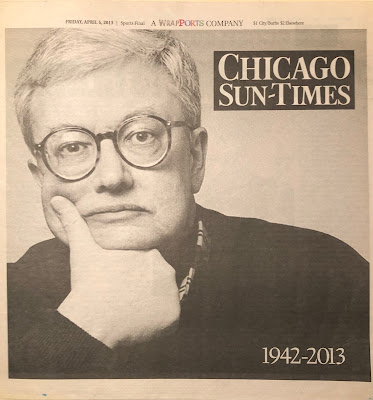 Because these things do disappear. I have the Southtown Star to thank for having the obituary at all—I think this is an abbreviated version of what we ran, I'll have to dig out a physical copy and check. In the commotion after Roger's death, no one at the Sun-Times archived the obituary, but the Southtown ran this version and did.

—Originally published in the Daily Southtown, April 5, 2013
Posted by Neil Steinberg at 6:23 AM