Why do buried lives become important? 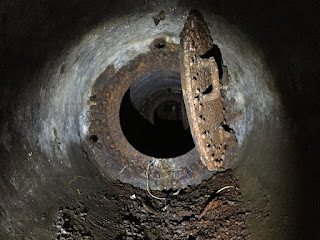 Am I the only one seeing the ghost of Floyd Collins?
He flickered into mind after those boys were trapped in a cave in Thailand, a dozen soccer players and their coach.
When the search was going on, as each day passed, hope dwindled. Then they were found but, in a cruel twist, getting them out was neither immediate nor perhaps even possible. It involved a six hour dive, in near total darkness, for children who could not swim. Found but not safe.
Collins was the Kentucky cave explorer, on Jan. 30, 1925, he became trapped 55 feet underground, while trying to find a new entrance to the Crystal Cave. He too could be seen but not rescued.
The next two weeks became an early American media circus, as primitive radio stations set up, barkers sold food and souvenirs. A reporter for the Louisville Courier-Journal, William Burke Miller, began wriggling into the cave to interview Collins, and sent out breathless dispatches:


CAVE CITY, Kentucky, Feb. 2—Floyd Collins is suffering torture almost beyond description, but he is still hopeful he will be taken out alive, he told me at 6:20 o`clock last night on my last visit to him.
Until I went inside myself I could not understand exactly what the situation was. I wondered why someone couldn't do something quick, but I found out why.      "I was lowered by my heels into the entrance of Sand Cave. The passageway is about five feet in diameter. After reaching the end of an 80-foot drop I reached fairly level ground for a moment. From here on in I had to squirm like a snake. Water covers almost every inch of the ground, and after the first few feet I was wet through and through. Every moment it got colder. It seemed that I would crawl forever, but after going about 90 feet I reached a very small compartment, slightly larger than the remainder of the channel.
This afforded a breathing spell before I started again on toward the prisoner. The dirty water splashed in my face and numbed my body, but I couldn't stop. Finally I slid down an eight-foot drop and, a moment later, saw Collins and called to him. He mumbled an answer.
My flashlight revealed a face on which is written suffering of many long hours, because Collins has been in agony every conscious moment since he was trapped at 10 o`clock Friday morning.
I saw the purple of his lips, the pallor on his face, and realized that something must be done before long if this man is to live.

Miller won the Pulitzer Prize. Collins died of exposure after two weeks, days before a shaft sunk trying to reach it would have broken through. The fates of those boys are still in the balance.
Why do such stories resonate? Collins would be followed by a number of others—Baby Jessica McClure, the 18-month old girl who fell into a well in Midland Texas in 1987 comes to mind. When children are involved, world attention is even more transfixed.
Maybe it's the optimist in me, but these stories touch on something precious. They remind us of the value of every life. Experts from half a dozen countries, including the United States, which sent Navy divers, rushed to Thailand. It was breathless, front page news. The same children who would be turned away from our borders with a sneer of mocking derision were suddenly of enormous value—suddenly, I would suggest, be given the enormous value they deserve.
I hope that the boys are rescued, all safe, and reunited with the parents. And moreover, I hope that the world, relieved, sees the contours of a lesson in this. Why do people only become important when buried alive? Why are the lives of others precious only when they are put in peril? Something to think about.

Posted by Neil Steinberg at 7:13 AM