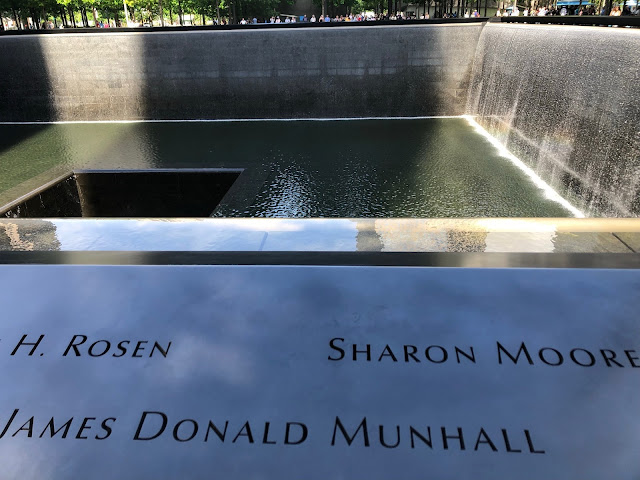 Our son works in the Financial District in Lower Manhattan. So when we visited him last week, we got a hotel room next to the new One World Trade Center, steps away from the site of the old, and of course we paused to contemplate the 9/11 Memorial, "Reflecting Absence."
If you've never been, the footprint of the north and south towers of the old World Trade Center have been preserved, two squares formed by bronze parapets, listing the names of the 2,983 people who died that day in the terrorist attacks, plus those lost in the 1993 precursor bombing.
Water cascades 30 feet down each side — the largest manmade waterfall in North America— and in each pool, what I consider the brilliant stroke, is "a smaller, central void," in the words of the 9/11 Memorial & Museum. Those two square pits you can't see the bottom of, a perfect physical evocation of endless grief after profound loss. You yearn to see a bottom, but there is no bottom. Only emptiness.
The design, by the way, was done by an Israeli-American architect, Michael Arad, his work picked out of more than 5,000 submissions. While not generally a fan of memorials, some events are so enormous, our humanity demands it. Which makes me wonder how we will commemorate COVID. Arad has proposed something interesting to honor the 50,000 New Yorkers who died of COVID: a "floating sanctum" at the bottom of the Central Park Reservoir.  It would only appear when the water is lowered for maintenance. Most of the time it would be out-of-sight, which is fitting, since even the most terrible events submerge in our consciousness. Time heals whether we want it to or not.
“I liked the idea that for one week each year, you could access a place in the city that at other times is just a submerged memory,” Arad told Architectural Digest. “The Reservoir exhales, the level of the water sinks, and the dam appears so you can traverse it on foot.”
I imagine, on that one week a year, it'll draw quite a crowd. For a long time. But not forever. Nothing is forever. Not even grief. 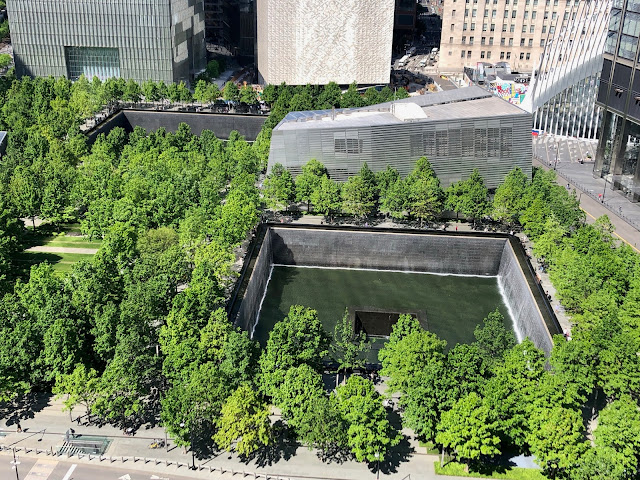