October was a busy month, bookended by Spain at the beginning and Texas at the end. Looking back, I realize that during October I hit two very different houses of worship: the Sagrada Familia in Barcelona, and the non-denominational chapel at the Dallas/Fort Worth International Airport.
I doubt they've been juxtaposed before. But take a look at each and compare. The Sagrada Familia, designed by the wild genius architect Antoni Gaudi, really defies capture in one photograph, or a dozen. It's enormous and complicated, soaring and sprawling, covered with birds and beasts, human figures and plant life. And the airport chapel, well, it's very small, and has this stained glass triptych at the front in a vague sunbursty pattern. I took a single photo, not entirely sure why.
I'm going to do an entire post on the Sagrada Familia, part of a Spanish Notes series I plan to run next time I'm on vacation. I'd better get on that. In the meantime, I had to pose the question: what explains the difference in aesthetic achievement in these two sanctified spaces?
They have similarities. Both are trying to inject a sense of the spiritual into ordinary life. Both are meant to hold people as they try to commune with God, or their sense of the eternal, or whatever.
And yet they seem to define the wide span of human achievement. Or do they?
A number of explanations present themselves. A difference of ambition, certainly. Gaudi wanted a place where not only a community would gather, but pilgrims from across Spain and Europe. Dallas's Interfaith Chapel — actually chapels, plural, since there are five. This is the one at Terminal E. The airport chaplaincy describes itself as a "ministry of presence," meaning its purpose is to be there, "embracing the importance of compassionate and caring help available to all passengers, military troops and employees, 24 hours/day, 365 days/year."
So something more individualistic, less communal. The airport chapel's modest aims are to be a place where a few individuals can go to meditate, to pray — there are prayer rugs off to the side. It strikes me that another, unspoken purpose is to shield the proceedings. Sort of a spiritual restroom where a person can perform their moral ablutions out of sight, though the chapel at Terminal D is larger, and they do hold regular communal services.
I'd say that the Sagrada Familia also benefits from being the handiwork of one master architect, the apex of an imagination geysering creativity. Although the DFW airport, which marks its 50th anniversary next year, was designed by Gyo Obata, who was no slouch. He also designed the National Air and Space Museum in Washington DC, plus the Wrigley Company Global Innovation Center in Chicago, and the Lincoln Library down in Springfield.
The era when the two holy places were conceived matters. Gaudi was working in the late 19th century, the Art Nouveau era, already alive with sensual forms and nature intruding upon design. Obata was working in the 1970s, the tail end of modernism, with its spare lines that looked sweeping and clean and futuristic, at the time, and came to seem empty and dead and cavernous, at least to me.
Plus scale. As enormous as Sagrada Familia is — it made me think of St. Peter's — DFW covers 27 square miles. That doesn't leave much budget for a lot of elaborate bronze leaves and frogs on the doors. The public spaces swoop and inspire, as if God were replaced with aviation.
When I mentioned this topic to my wife, she asked her typical penetrating question: which is better for contemplation? The vast sanctuary of the Sagrada Familia invites vertigo more than repose, and reflection proved difficult with platoons of tourists tramping past. The DFW chapel certainly was far quieter, though even lingering briefly in the empty room felt almost like a kind of trespass.
I can't overlook the faith differences: Gaudi was a devout Catholic, and say what you will about Catholicism, it is the go-to religion when it comes to inspiring fabulous architecture and timeless art. The melange of beliefs and practices gathered under the banner of interfaith has a less stellar track record.
Although. If you look at the Baha'i, which are not pure generic interfaith, but do represent a blending of several traditions, they nevertheless have spectacular temples all over the world. The one in Wilmette, now that I think of it, we also visited in October. As I said, a busy month. And we sat in the Baha'i temple for quite a long while in quiet contemplation. So score one for ecumentalism. 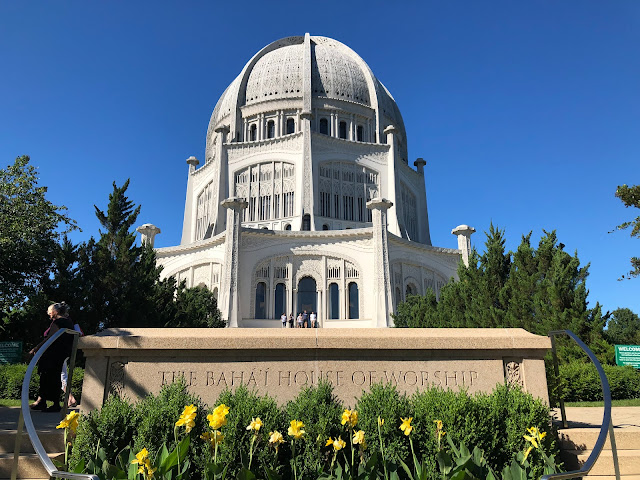