"A sea of misery"

My wife and I were walking across Pershing Square, a public space in Los Angeles which, like many parks and open areas here, has been occupied by the homeless.  She said she wasn't comfortable navigating this "sea of misery" and I didn't argue.
All things being equal, I would have preferred to stay by the ocean.
But while planning the trip, my wife observed that we had stayed at Venice Beach a scant five years ago, plus a few days at Virginia Beach last summer, so we were practically soggy with ocean spray. I almost pointed out that half a decade is actually a longish time, and Virginia Beach was a different ocean -- facing right, at the Atlantic, instead of left, at the Pacific. But blue is blue, the salt water taffy's the same, I get that, and as she rightly points out, we are not beach people, though we are not step over the bodies on the way to the swish restaurant people either, which might make us oddities.
The beach has its homeless people too. But not like this, to my memory.
Like everyone else, we ignored them best we could. Our two days in Los Angeles were spent in the historic district, which, she is correct, is jammed with interesting Deco buildings that I did indeed enjoy, plus even earlier architectural marvels, such as the very Daniel Burnham-ish Bradbury Building, with its ornate ironwork, where key parts of "Blade Runner" were shot. There is a dynamic Central Market filled with food stores and eateries, the kind of vibrant place that Chicago's French Market tries and fails to be.
We put in a lot of miles up and down Broadway—lots of Hispanic bridal and quinceanera stores, shop keepers who naturally hailed passersby in Spanish, stores buying gold to make into horrendous gold jewelry, apparently, a thriving business in phone cards and Disney towels and odd brand boom boxes.
The place struck me as New York City in the 1970s, before gentrification took over. That's not praise, but a criticism. There were more homeless people per square foot than I've ever seen in New York, and we didn't even approach Skid Row-- I was all for marching over to personally inspect the armies of the homeless camped there, but my brother-in-law, who lives in the historic Eastern Columbia Building, assured me that was a Bad Idea. I only took one photo—the one above, as we were parking to check into the Athletic Club—but I could have taken 50 of the men scattered about, like corpses in a Matthew Brady photo of a Civil War battlefield, sprawled where they fell, eyes half crescents of white. But taking photos of them unconscious, in such a state of humiliatingly public abject ruin, seemed wrong, a final insult, and I felt so conflicted doing it once that I never could take another.
About 10 percent of all the homeless in the nation live in Los Angeles County--more than 50,000 people, though the count is disputed. That contrasts to about 7,000 people homeless on a cold night in Chicago. The Los Angeles Times carried a story about advocates trying to change the laws so the homeless can more comfortably go about their business in public; my sympathies tend to be with the public, who deserve to have parks and benches for their use, too.
The received wisdom about the homeless is that they are you or I without a paycheck or two, but the truth, with the Los Angeles homeless, is more they are you or I after being deprived of the anti-psychotic medicines we need for the next 10 years while being marinated in multiple addictions and some organic mental disorders tossed in for good measure. Seriously crazy people, too far gone to even beg effectively, snarling and staggering and sprawling everywhere. The narrowing of the middle class is much remarked on, but another result of the Republican War on Government is the hollowing out of social services, the results of which are only too clear here in Los Angeles. A humane society would treat its mentally ill; not being that society, we step around them while averting our eyes instead

Neil Steinberg, not dead at 54. 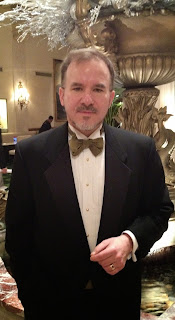