Rahm's a jerk, but he's our jerk 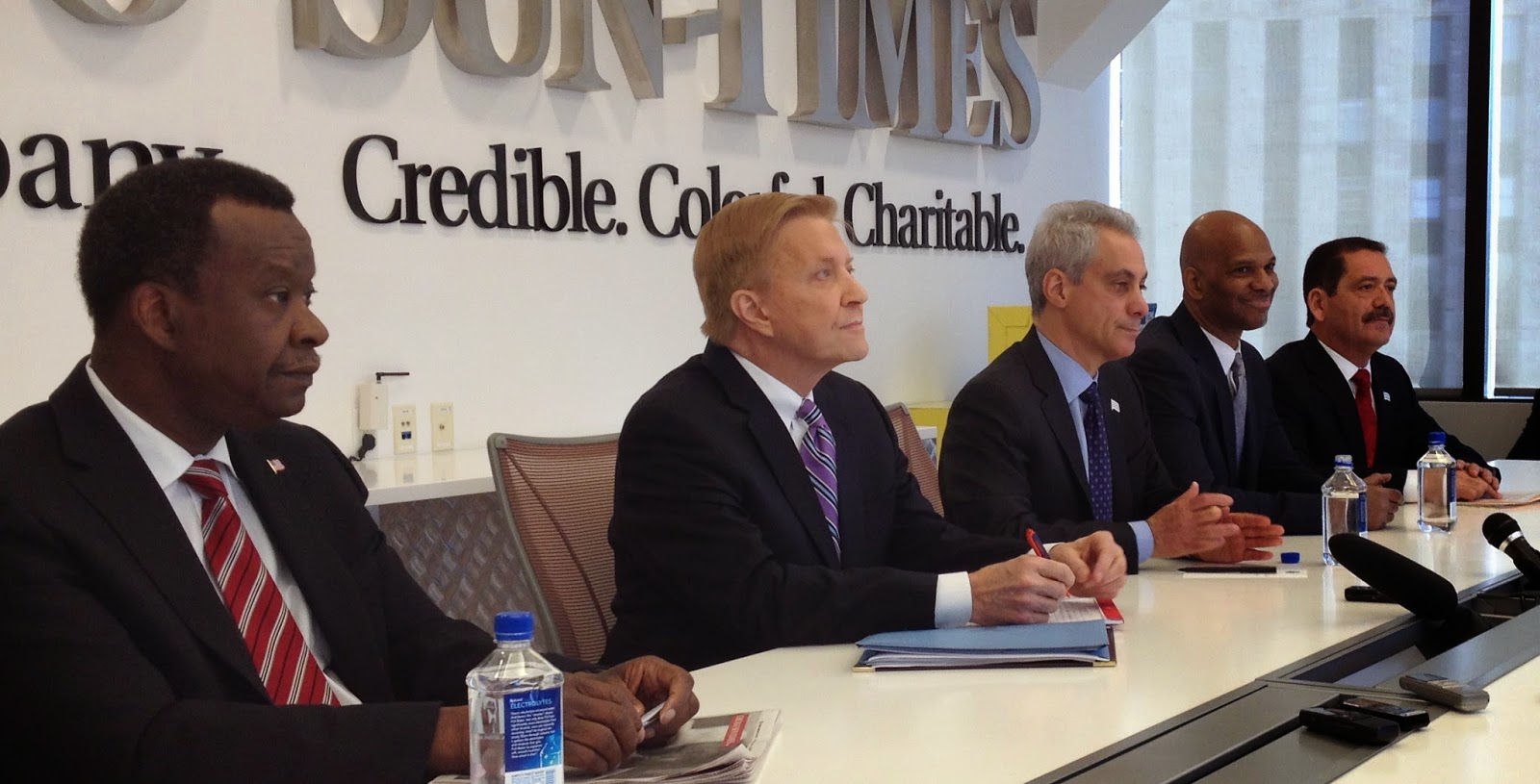 This was an assignment. I don't have a Sunday column, and don't usually attend editorial board meetings. But my boss asked me to sit in on the mayoral "debate" at the paper Friday morning and write something. Not that I minded. The 2015 mayoral election is a dreary affair, and taking aim at those involved was as difficult as shooting a duck in a bucket. If this piece seems a tad sharp, it's because of the unpleasantness of contemplating what passes for political discourse in this city.  The Occupy Chicago rhetoric seems to have infected the general view of Rahm Emanuel. Everyone hates him—his personality makes that easy, I'm not fond of him either, but knee jerk contempt overlooks that he's making all these hard choices for a city that was busted long before he got here. People seem under the delusion we have vast resources, that Emanuel's closing mental health clinics because it's his idea of fun.
How anyone can pretend to care about the city yet back one of the crew of misfits running against him is beyond me. I'd never met Willie Wilson before; he seemed uncertain where he was or why he was here, and began by saying he had no interest in the Sun-Times endorsement. Bob Fioretti I knew; I drove around his ward with him once—and see his campaign as the standard end-of-career lunge. I was actually fond of him, despite his shutting down a business in his ward, Felony Franks, because he didn't like its name. But that was before watching him mudsling, trying to make something stick to the mayor.  Repellent. Rahm is Rahm. I'd never met Dock Walls, but thought he passionately expressed the views of the big chunk of the city who are African-American and disenfranchised. Jesus Garcia I've been trying to shadow for a column for the past month, but arranging it seems beyond his press secretary's ability. I don't suppose we'll get that set up now.

A baby, a bozo, a jerk, a firebrand and a stiff.
Or, if you prefer, Willie Wilson, Bob Fioretti, Rahm Emanuel, William "Dock" Walls and Jesus "Chuy" Garcia.
The quintet of men who would be mayor for the next four years stopped by the Sun-Times Friday for a debate, of sorts, 90 minutes to talk about their vision of the city.
It wasn't pretty.
Let's go in order, left to right.
Wilson is a political novice, a millionaire running for mayor because he's missing 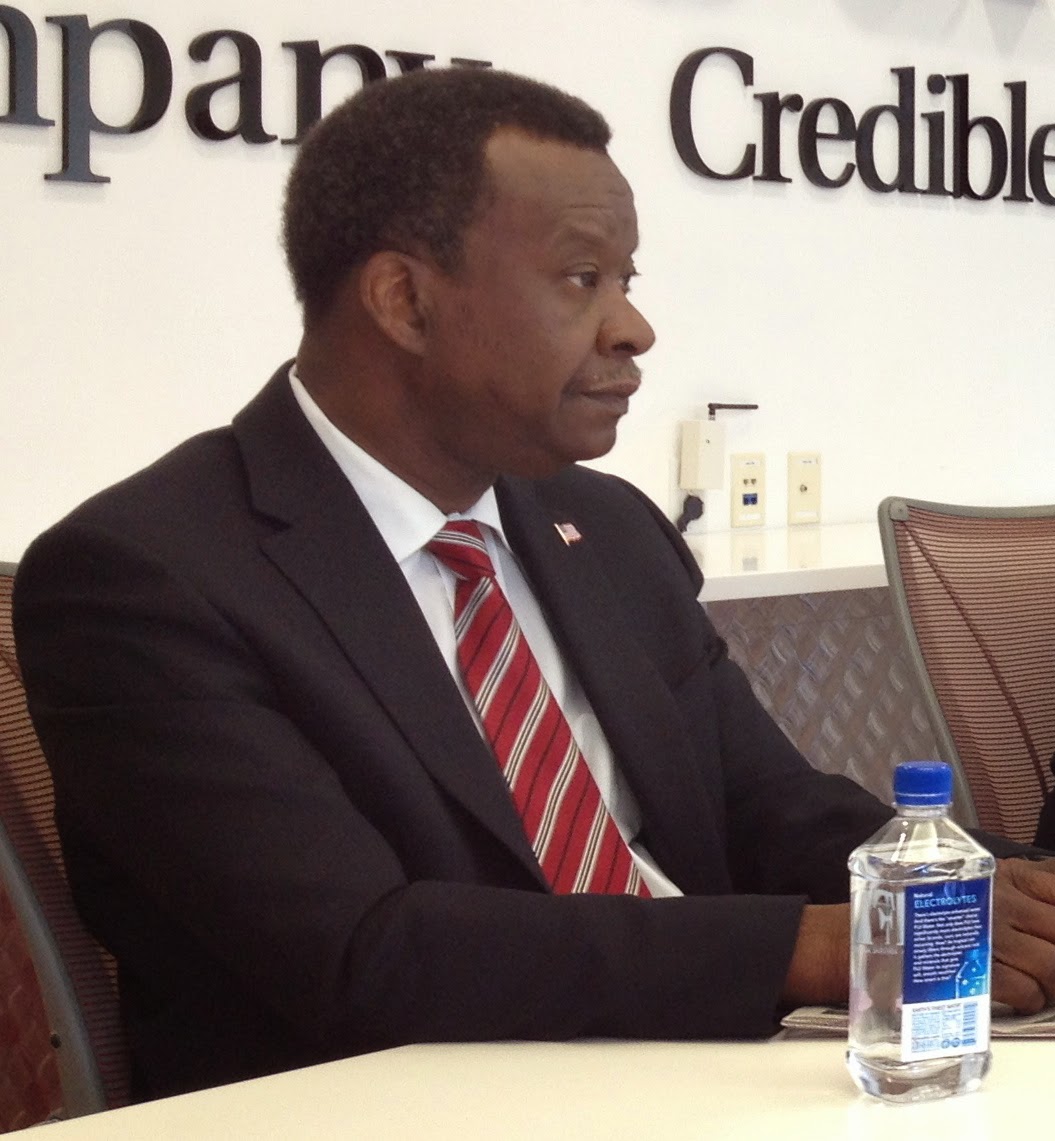 whatever gene keeps you or me from doing embarrassing things that we aren't capable of accomplishing half well.
In my case, I suppose it keeps me from auditioning for "Swan Lake." With Wilson, who built a successful medical supply business but is missing that gene, he's running a campaign half as a mission from God—he closed his remarks with a prayer—half as a how-can-we-lose-when-we're-so-sincere, Charlie Brown run at the football.
"I'm running for mayor wanting to make some definite changes," he said. "I want to come from the heart."
Given that his transit of Chicago history will end Feb. 24, it would be cruel to focus too much frank assessment upon him. Wilson points out that his formal education ended after one day of eighth grade, and perhaps after the campaign he can use his example to inspire kids to stay in school. 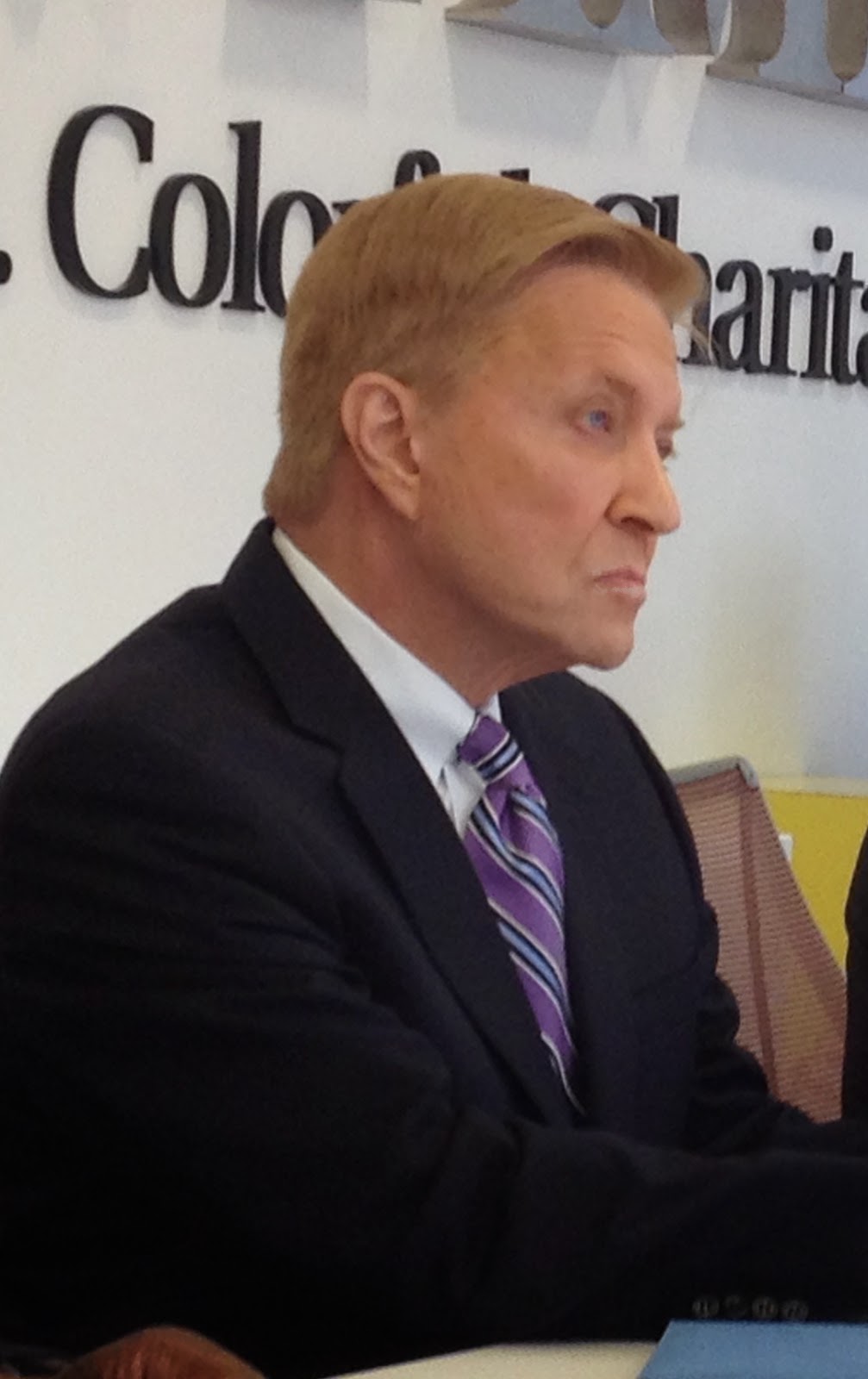 Fioretti — well, "clown" is a harsh assessment, especially since he dialed his hair color back, though his smile is still a chilling, facial appliance that walked off from "American Horror Story." He was a competent, block-by-block alderman before his ward was redistricted away. Now he is hammering away below Emanuel's belt, dragging the mayor's son into the campaign for getting mugged, hoping for a miracle. He continued his unfair flailing Friday, tossing everything that comes to mind into the blender, reaching back to the Clinton administration, accusing Rahm of having been "an advocate of cutting welfare benefits," as if that were a bad thing.  I almost blurted out, "That was the most successful social change the federal government initiated in the past 25 years." But I was here to listen, not talk, so I was able to hear Fioretti blame Emanuel for the assault rifle ban expiring, and for in general wrecking the city.

"Chicago is moving in the wrong direction," he said. 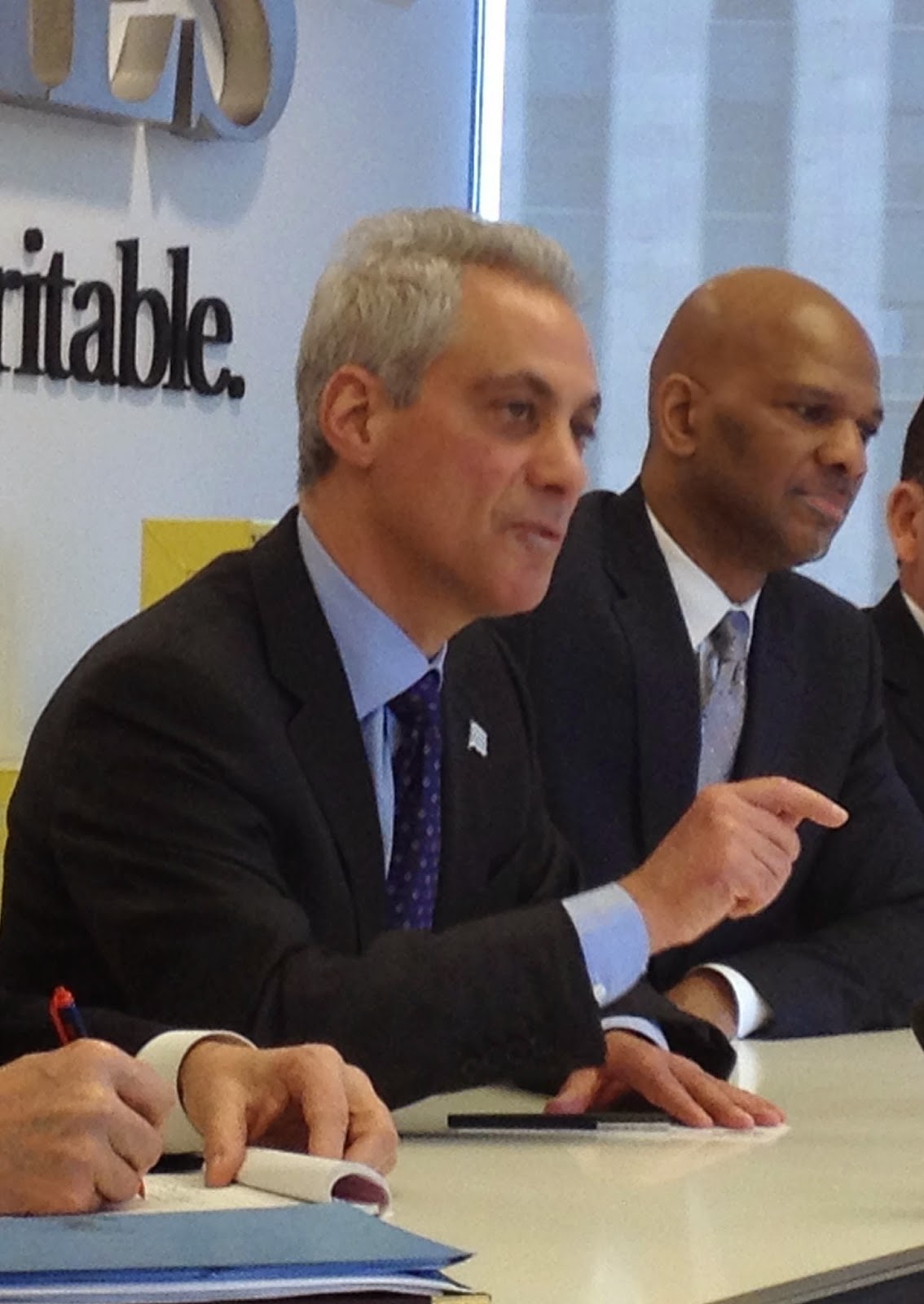 The mayor needs no explanation. We all know. He seems to have sincerely believed his high opinion of himself would simply be imparted to the voters by osmosis, and is hurt to discover otherwise (though $30 million of TV ads ought to gin up some affection, or at least the required number of votes). He did not actually say anything jerkish Friday. He was the same as always, reptilian, his voice a little softer, which to me seemed restrained fury, an I-spend-four-years-trying-to-save-this-frickin'-city-and-THIS-is-the-thanks-I-get!? seething resentment.
Unlike the others, however, he actually has a record.
"In the last four years, we've presented four balanced budgets without a property, sales or gas tax increase," Emanuel murmured. "Four years in a row we increased our investments in after school, summer jobs and early childhood education."
Walls was the surprise. In my mind he dwelled in the realm of perennially ambitious street hustlers trying for a legitimate score—I wasn't 100 percent sure he was a different person than Wallace "Gator" Bradley before now. But he came on strongest of the five.

"There's two Chicagos," Walls said. "There's a world class Chicago and there's an underclass Chicago. The world class Chicago is beautiful, safe tourist-friendly robust, full for resources and unlimited opportunity for Rahm Emanuel and the other 1 Percenters. That's the Chicago the media loves to brag about.. Then there's the underclass Chicago that nobody wants to talk about: decaying neighborhoods, unsafe streets, people dodging potholes and bullets."
Too true, and well-put, though he jumps to a surprising conclusion.
"Under Rahm Emanuel, Chicago is the most racially segregated city in America," Walls said. He didn't add: and under Richard M. Daley. And under Harold Washington. And under Jane Byrne. And under Richard J. Daley. And under Martin Kennelly.
The question is, what would Walls, who said he was retired from a t-shirt business that grosses $40,000 a year, do about it? 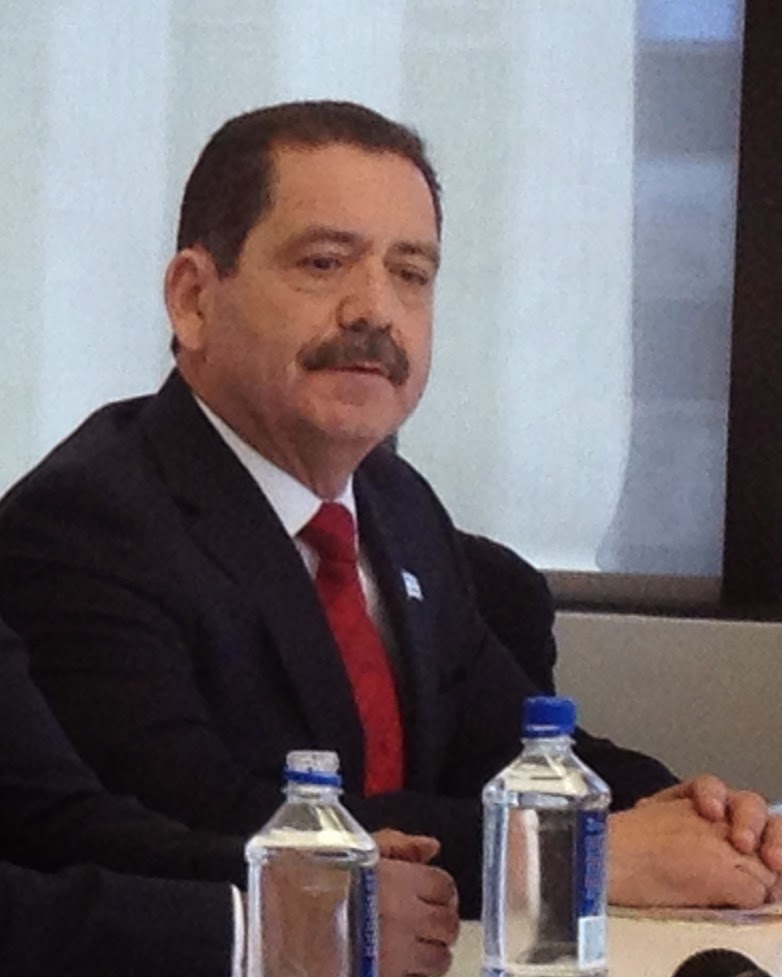 Garcia carries himself like a man balancing phone books on his head, like the profile off a coin, a minor bureaucrat in a small country who should be wearing a red sash and applying wax seals to official documents while ceiling fans slowly turn.
"I have been living in the same bungalow for ... 24 years, 34 years married to the same woman," he began.
Well Jeez, why didn't you say so? Here's the keys to the city.
Chicago's problems burst the confines of our 90 minutes; we really only talked about the ballooning pension disaster and the crumbling schools. None of the would-be mayors connected one to another, as if cuts in the schools were being done for the heck of it. All seemed to toss airy notions at the former—Wilson brought up the will-o-the-wisp of a Chicago casino, Fioretti a tax on LaSalle Street trading, Walls would encourage small business like his t-shirt operation. All except the mayor discussed schools as if we had all the money in the world, and Rahm just hates to spend it on poor folk.
"They want to put children at risk, that is intentional," Walls explained, calling charter schools "a diabolical plot."

Listening closely for 90 minutes, I didn't hear one promising idea, one exciting proposal, from anybody. When Tom McNamee, the editorial page editor, ended by asking the men to give their vision of Chicago's future 20 years from now, he merely lit the fuse on a blast of bromides.
"The future of the city of Chicago rests in redeveloping the neighborhoods and the former industrial belt," Garcia said. "Chicago has the potential to maximize its position and its advantages especially given the great assets that we have in the field of transportation: rail, highways, air, and its port.  Those are tremendous assets that put us to become a hub for tremendous economic activity."
"Chicago hasn't had an industry to call its own since the stockyards," Walls said. "Our best hope rests in small business. Many of those small businesses are gems waiting to happen...We cannot exist as a service economy. That's like eating at your own flesh."
You get the idea. Emanuel made sense—"Twenty years from now Chicago is still going to be a very diverse, vibrant economy," he said. "My number one goal is to make sure it's also a city middle class families can afford to live in and raise their children in... Chicago's diversity is its strength." Wilson, of course, added  a surreal note. "We must make sure Midway and O'Hare reflect the neighborhoods they serve." I'm still chewing on that one; it has to be an oblique reference to who gets concessions there, or just gabble.
I can't vote in this election, not living in Chicago -- as I'm sure you'll point out, trying to undermine the plain truths outlined here. But watching the spectacle, I kept thinking, "Rahm may be a jerk, but he's our jerk." You might not like what he's doing, but at least he's doing something. Garcia seemed to think that the parents, once consulted, would close the schools themselves. The airy, let's-put-on-a-show speculation of the other four was truly frightening, given that, through some wild longshot, there might be a tiny fraction of a chance one could be mayor: say 1 out of a 1,000.
Walls speaks a good piece but has done nothing to make anyone suspect he could do the job. The others have neither the language nor the experience. Voters seem resigned that Rahm Emanuel will win. Looking at his opponents, I can say with confidence: not only will he win, but he should win. God help the city if he doesn't.
Posted by Neil Steinberg at 12:00 AM