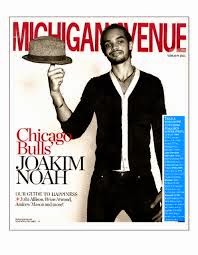 Four years ago I was hurrying through the lobby of the Sun-Times building when I ran into Susanna Negovan, then the editor of Michigan Avenue magazine. As freelancers will, I wondered why she wasn't pushing work my way, and she countered by asking if I wanted to write a profile of Joakim Noah.
"Sure!" I replied, mustering enough professionalism not to add, "Who's Joakim Noah?"
Turns out the Bulls center lived in Deerfield, not far from my house. We sat in his kitchen and talked, and I learned a vital lesson. Doing my advance research, I had watched videos of him being drafted onto the Bulls, which made him seem like something of a goof in a white tuxedo. The man I met was anything but: thoughtful, composed, much more grounded than most 20 somethings would be if you started firehosing millions of dollars at them.
Wednesday is his 30th birthday, and in honor of that, I figured I would repost my profile of him.  Notice how little of it is actually about sports. I told Susanna I wasn't going to get into that, I was much more interested in him as a person, not a player. And to her credit, she agreed.

At 6-foot-11, Chicago Bulls center Joakim Noah is four inches taller than the average NBA player. A new $60 million, five-year deal means he’s paid more than twice what most of them get.
While it’s typical for those who make it to the NBA to brag about their gritty roots—the tough playground courts of Newark or the South Side where they honed their moves—Noah, the son of French tennis star Yannick Noah and a former Miss Sweden, Cecilia Rodhe, has a unique background that spans the globe.
“Everybody looks at me like, ‘Who is he?’” says Noah, relaxing after practice at the kitchen table in his home in Deerfield. “I’m from a lot of different environments. You can’t put me in a box. I come from different cultures, I have different beliefs, I talk like I’m from New York, I speak fluent French, I’m African, I’m Swedish. So I come from all these different places, and I understand all these cultures pretty well. They make me who I am, but at the same time, I’m not one thing; I’m all these things.”
One thing Noah isn’t is ostentatious—he’s not inclined to show off the fancy features of his crib, nor does he drip with bling. “You won’t see me wearing diamonds. I would never come home with a big diamond watch,” he says. (“We would throw you out of the house,” adds his mother, sitting next to him.) He’s more likely to be found in his favorite African beaded necklaces. “I don’t wear Gucci,” he says. “I’ve had my same car since my rookie year.”

Posted by Neil Steinberg at 1:54 PM