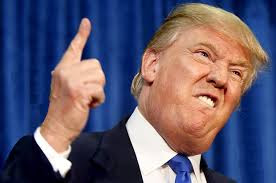 After being hectored to ignore Donald Trump, the media did just that after he lost Wisconsin to Ted Cruz.
Suddenly the air was out of the balloon, the billionaire's mojo gone, or severely bummed out.
For a few precious days.  But he has a way of bobbing to the surface, like the piece of ... Trump that he is.
So now he's back, demanding his due.
Let's give Trump his due.
Yes, he's leading the polls, typically double-digits over Ted Cruz, depending on the poll, which is sorta like preferring acid to poison. He's expected to rock the New York primary on Tuesday. He'll be twirling in the limelight like a prima ballerina, no doubt.
But Trump is all hat and no cattle, as Lyndon Johnson used to say. Without forming an organization or grasping the workings of Republican primaries, he is allowing Cruz to suck up the delegates, and the GOP is plotting to yank the nomination out from under Trump's nose if he doesn't reach the magic number of 1237, the number required to win on the first ballot. So the win in New York will be hollow.
Which sparked an aria of complaint from Trump early last week, aimed at the media of course.


"The media itself is so dishonest. Honestly, I do wonder. I’m millions of votes ahead, which they don’t even mention, they don’t even talk about. They talk about delegates. And I’m hundreds of delegates ahead but the system is rigged, folks. It’s a rigged, disgusting dirty system. It’s a dirty system and only a nonpolitician would say it."

The cry continued in a Wall Street Journal op-ed on Friday:
"The only antidote to decades of ruinous rule by a small handful of elites is a bold infusion of popular will," Trump wrote, sounding very much like Bernie Sanders.

Pardon me, but boo-fuckin'-hoo.
For a winner, Trump seems to be jumping straight from doing battle to bitching about the outcome without even going through the formality of defeat.
"A rigged, disgusting, dirty system"
Well, yeah. So is international trade. So is war. So is our judicial system. So are most if not all of the problems that will land with a thump on his desk, should fate be so cruel to the United States as to allow him to be president. I don't hear Obama complaining, and he spent seven years pushing against the Confederacy of Obstructionist Idiocy who'd happily see the country fail if it means Obama fails too. Don't hear him moaning about it, though.
What happened to win-win-win? What happened to winning so much that we'll get bored with winning? Why doesn't he just start winning right now, so we can see him winningly win his way toward the White House.
Right. We know. Because it's all lies and bluster, lies and bluster that about 50 percent of the Republicans in this country nevertheless lap up.
I swear, it seems 50 percent of the country will believe anything.  Well, better be exposed as a fraud now than wait until he's elected. Which still might happen.