Really important people show up for the bris 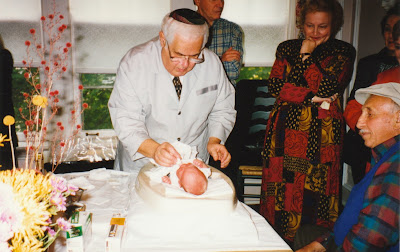 Politics has become such a free fire zone, the tendency is to blast away at everything, big or small, without any sense of balance. Thus Hillary Clinton can be assailed for a policy statement, for something her husband did 20 years ago, for her relationship with Wall Street banks, and her smile, all in the same breath, all with the same vigor, as if those were all equivalent.
I try not to do that. Given Donald Trump's utter unfitness for president in thought, word and deed, between his preying upon the darkest impulses in the submerged American psyche and his tacit union with xenophobes of all stripes, who cares whether his wife posed for risque fashion shots or that his hands are tiny? Why traffic in trivialities?
So it is not significant that the man skipped his own grandson's bris to campaign. If the three marriages don't show that Trump doesn't hold family life in high regard, nothing will. Though the delicious irony that Trump has the White Supremacist vote locked up; the existence of his Jewish grandkid must be one of the many things they don't know. Reading a story laying out the whole situation—Brisgate, we'll call it—it struck me that the average, non-Jewish reader might not get the significant of brises, something that I explained back in the 1990s, when I hosted a pair.

Elsewhere in the paper today, my colleague Jim Ritter has a calm, sober look at the current state of the art of medical thinking regarding the practice of circumcision.
Poor guy.
I wish I could have gotten to him beforehand and warned him: Jim, buddy, don't do this. Listen to me, the voice of experience. Write a story about podiatry.
You see, I, too, wrote a story about circumcision, about 10 years ago. And have found myself, ever since then, placed on the mailing list of NO-CIRC, the California group that feels circumcision is the greatest atrocity visited upon mankind since the Romans crucified slave rebels along the Appian Way.
So every quarter, for the past decade, the NO-CIRC newsletter lands in my mailbox. It's an arresting document, filled with tales of botched circumcisions, of doctors who now see the light, of men declaring their lives ruined by circumcision (they speak of not being "complete"). There are all sorts of heretofore unimagined practices, such as submitting to reconstructive surgery to have the little bit put back.
I should be strong and just pitch the newsletter out, unread. But that would take a more solid will than my own. Curiosity always gets the better of me, and I need to flip through it, marveling that what is for me and everyone I've ever met a forgotten bit of surgical business buried deep in our unremembered pasts is, for these people, a defining wrong and peerless crime they set their lives to fighting.
Hope you enjoy it, Jim, because they've got your number now.
Of course, I'm biased. Circumcision is one of my people's rituals. Eight days after a boy is born, you get everybody over to the house. A mohel—or rabbi trained to do the deed—shows up, puts on a little show, does a few deft slices, and then everyone breaks out the Crown Royal.
I've hosted two bris ceremonies in the past three years and would love to host another, if the opportunity arrives. They're fun. True, there is a certain anxiety among the male guests, who tend to whistle silently, their hands folded in front of them, protectively. They stare with sudden interest at the light fixtures while the act itself is being performed.
But the newborn boys, snockered on Manischevitz sucked off a piece of gauze, took it like, well, men. A little crying, and then back to normal. Maybe they'll hate me someday for it and join NO-CIRC, but I sort of doubt it.
And the ceremony had meaning to me. Not so much the ageless covenant going back to Abraham, an unbroken chain from Chicago leading to the sands of the Sinai Desert. No, what I found most amazing was that people showed up. A bris has to be done at a set time - eight days after the birth, during the day. Which means that it is rarely conveniently scheduled. People don't come out on a Tuesday morning because they want to watch a surgical procedure and grab a free bagel. They come out because, I assume, they care about you, they're proud you've had a boy and want to share in it.
A good thought. I concluded, after the two bris rites, that as a general rule the people who took the time to attend were the people I was going to expend energy worrying about. Several times, when faced with a friend's less-than-friendlike behavior, I comforted myself with the thought, "Heck, they didn't come to the bris—what did I expect?"

—Originally published in the Chicago Sun-Times, March 2, 1999
Posted by Neil Steinberg at 12:00 AM