Auto Show Spectacular #4: Motoring to Sycamore in a new Bentley 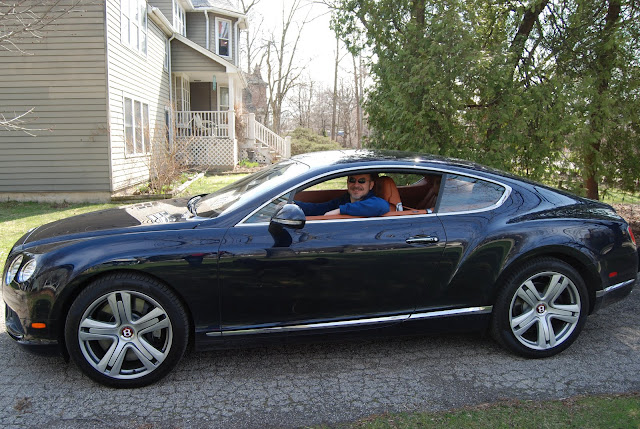 The Auto Show is in Chicago, winding up this weekend, and to celebrate I'm running some of my favorite car columns.
This one is special; it directly resulted in the creation of the blog you're reading.
After it was printed, one word stuck in the craw of the publisher at the time: "friend." He came to see me. "Why are you writing columns promoting your friend's business?" he demanded. I explained that George Kiebala was not my actual friend in the traditional sense of the word. I had met him exactly twice, both times so he could hand over a car for journalistic purposes, here and when I wrote a story about driving a Ferrari for Michigan Avenue magazine. "Friend" just seemed an apt term of affection for anybody who would loan me a $185,000 car.
I might have gotten off the hook had I left it there. But, warming to my topic, I floated a question of my own, something along the lines of, "And how come when you asked me to write about the Tesla S, I didn't respond, 'Oh you mean the Tesla that Michael Ferro owns? The Tesla produced by his pal, Elon Musk? The Telsa that he's an investor in? You want me to write about THAT Tesla?' No, I just wrote the column. Why when it comes from you, it's journalism, but when it comes from me, it's corruption?"
Boom.  A week's suspension. Which so shocked me. Not so much I told anybody at the paper. I just began doggedly reporting stories. But I also began think that I was going to be pitched into the water soon and had better build a boat. I took a web domain name I had bought, created a blog around it, and two months later everygoddamnday.com debuted. So it all turned out okay in the end. 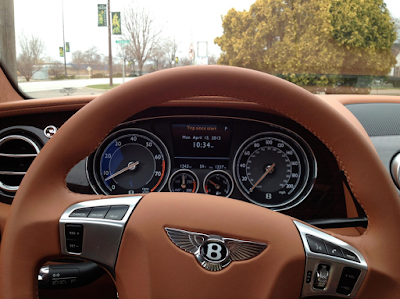 A buddy throws a yearly party, which is good. Parties are good. But the party is in Sycamore, which is bad. A lovely town, Sycamore, but when storytellers of old coined "in a land far, far away," they had Sycamore in mind. OK, it's only 60 miles west of Chicago. Still a haul, especially if you plan on coming back; then it's 120 miles round-trip.
Usually I solve this dilemma by not going to the party, which works, but is not all that friendly. This year though, well, we went to dinner and had such a fun time, I resolved I would get myself to his party, 120 miles or no.
My mind—as regular readers know—can work strangely. I automatically strive to embellish life, to add pizzazz. So I thought, "Well, if my wife and I have to drive this 120 miles, then we might as well drive it in style."
Which is where another friend, George Kiebala, comes in. George owns Curvy Road, an exotic car timeshare company in Palatine. It's like a condo timeshare, only for luxury cars, though you don't actually own part of the car but part of the car's use for a year.
It works like this: Rich folk who own really expensive cars—Ferraris and Lamborghinis and such— often don't drive them much since they're always working to stay rich. Yet they don't want to sell their babies. So they turn them over to George, and he pairs the cars up with semi-rich folk.
Four springs ago, I borrowed his Ferrari 355 F1 Spider. It was fun. My boys slightly altered their general opinion of Dad as some stone loser in a dying trade. George told me to come back any time. Every spring since, when the weather warms, I remember his offer but chicken out. Driving a super-fast car that belongs to someone else is a palm-moistening experience, at least for me, whose mind skips nimbly ahead to the bad as well as the good, to imagined encounters with bridge abutments and unhappy police officers and tickets for felony speeding. So I put it off.
Into that mental mix add Sycamore, and those 120 miles.
For those who pay, Curvy Road isn't cheap—you pay a $1,250 membership to join for three years, then purchase either a one-tenth share for $12,000 or more, depending on the car, or a one-fifth share for $18,000 or more, based on a 40-week year (leaving a dozen weeks for maintenance, delivery, etc.; the owner gets to use unbooked time). In other words, at least $3,000 a week for four weeks, or $2,250 a week for eight. Still a boatload of money for working folk, but far more affordable than the jaw-dropping sticker price of these cars.
George tried to interest me in an Audi R8, a mid-engine monster sportscar with a glass hood. He took me out on a test spin. There was lots of laughter—joyful laughter, nervous laughter, oh-my-god-we're-gonna-die laughter. And while I enjoyed the experience, if only for its sheer terror, I preferred the 2013 Bentley Continental Twin Turbo GT V8, a brand new $185,000 coupe that belongs to a surgeon but could be mine, briefly, for driving-to-Sycamore purposes.
"Bentley has always been the thinking man's Rolls-Royce," said George, with approval, during our test drive. The level of quality is amazing."
That it is. The interior, flawless brown leather from cows that are not fenced, to avoid hide damage. Eucalyptus wood dashboard. A clock that is basically an $8,000 Breitling watch. Double-paned windows.
"This is seriously a work of art," said George. "It's like riding around in a museum."
A museum that leaves other cars at a light like their tires are nailed to the road. Cautious sort that I am, I fretted about insurance. George assured me I was fully covered. Besides, "A car like this, your awareness is heightened by an imaginary bubble around it. In 14 years, I've had virtually zero incidents. It's been unbelievable."
My awareness certainly was heightened driving away from his Palatine headquarters in my new Bentley. I was keenly aware of how lucky I am, and laughed loud and long at fate that, even for a day, let me behind the wheel of this baby.
On my block, the neighbors were outside, thank you God. They walked over as in a trance. "Beautiful," one sighed.
Soon my wife and I were cutting through the cornfields—or whatever fields, I'm not a botanist— heading to the party. And there an interesting thing happened. I parked in the driveway. We mingled and nibbled and sipped and chatted. Conversation went here and there, and I puzzled over how to guide it toward the deluxe ride that had brought us, the better to bathe in its reflected, undeserved glow. But I was so warmed already, it wasn't a priority. I didn't have to brag or tell anybody—I knew. Suddenly it was time to go—a Bulls game to watch with the boys—and as I encouraged my wife toward the door, I found myself holding the elaborate Bentley key fob, not down at my side, but sort of up, before me, almost chest level, in both hands, as if I were fiddling with it, but actually just sort of displaying the winged "B" - that's what these fobs are for, I realized. No one noticed, and I didn't thrust it under anyone's nose, which normally would not be beyond me. But I was so centered, so in the zone, it wasn't necessary, and we drove home in our beautiful car.