The Auto Show is at McCormick Place this week. To celebrate, I'm revisiting some of my favorite car columns. Such as this, from 2011, where I become the first civilian in the Chicago area to drive a Nissan Leaf. Or at least tried to be. 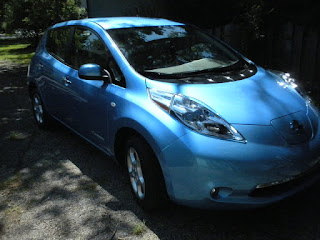 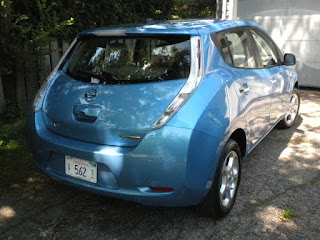 "Here's your key," said the man from Nissan, my first adjustment to the brave new world of electric cars, since what he handed me wasn't a key at all, in the sense of something metal that slides into an ignition and turns, but an oval fob.
The fob had buttons to lock and unlock a 2011 Nissan Leaf, the all-electric car debuting in Chicago this weekend. But to start it, all that was necessary was for the fob to be near the ignition, an orange push button.
Which led to the second adjustment. Starting the car caused the dashboard to spring to life, chirping a brief electronic fanfare, but nothing so industrial as engine noise. It drives silently — a slight electric whine if you mash on the accelerator. There are no pistons to rattle, no tailpipe to roar.
I dropped the Nissan guy at the train — the plan was for me to drive it for a few days. I came home, parked in the driveway, and the Leaf passed its first big test: the neighbors.
"What's with the car?" said the boy from next door, who stopped playing basketball and sauntered over to admire the sky blue vehicle. I explained that this is the new Nissan Leaf. No gas tank! No emissions!
"Cool," he pronounced. By then the silent alarm that new cars emit — like a dog whistle — drew a crowd. The boy's mom. Then Bill from across the street. I popped the little nose hatch to show off the charging outlet.
"Very cool," Bill said, adding the headlights remind him of a French Citroen.
My oldest boy burst out of the house, barefooted, demanding a test drive, and we blew around the leafy suburban paradise in my Leaf. The car accelerates briskly.
If I had to predict challenges the Leaf will face, I'd say first, the 100-mile range on a charge. Americans like to pretend they live in a world of infinite possibility. We don't like limits. That's why speedometers go to 160.
Second, the $34,000 price tag; a lot for a small car, though that will no doubt come down while the single-charge range goes up.
Shortly after we returned, my wife needed to go to the grocery. The Leaf was blocking the driveway. I might as well take her. The boys wanted to come along for the ride.
So now my family is sitting in the car. I push the button, the dashboard leaps to life. All the windows are open — to savor the engine silence — and I notice the air conditioner pumping out chilled air. Frugal soul that I am, I press the AC "ON/OFF" button and then try to put the car into reverse. Nothing.
I try again. I could put the Leaf into neutral, but not reverse or drive. Sweating, I work the stumpy shifter. Warning lights glow across the dashboard. An enigmatic "PS." I turn the thing off and on. That normally works. Nothing. Dad killed the electric car.
I jog inside and plug "Nissan Leaf" and "won't start" and "PS" into Google. The first page is a "Leaf Wiki" saying that this spring several hundred Leafs had a problem where, if you turn the AC off, the car goes dead.
"What to do?" offered this advice:
"Your best bet is to call Nissan road-side service to have the car towed/transported to a Nissan dealer."
I phoned my Nissan guy, who said, more or less "whoops," and sent a flatbed truck. This is where not laying out 34 grand helps.
My wife still needed to go to the supermarket, and since the car would go into neutral, she, my younger son and I pushed it off to the side so she could slide by in our gas-guzzling yet functional Honda. I appreciated the Leaf's agile maneuverability as I steered it through the open driver's door.
A few thoughts: No new technology ever arrives without setback. Ford Model Ts could break your arm when you cranked them. In the pantheon of car design flaws, with exploding gas tanks and unstable SUVs, the Nissan AC Button of Electric Death is but a footnote.
I still think this car is the future. Republicans can rage against global warming all they like. But the animals are moving north, away from rising temperatures. The science is there, and while that might not affect someone who believes the Earth was created 6,000 years ago, for the rest of us, change is coming.
An hour later, the Leaf was gone. My gut tells me I'll never hear from Nissan again,* which is a shame, because I did like the car, and wish I could have driven it more. Nissan told me they pushed up unveiling the Leaf in Chicago because the city has been so progressive about electric car charging stations — I was excited to see what charging it up is like.
The Leaf is a sporty little vehicle, when operational, and I hope its debut here this weekend is a big success. But a practical tip: if you are tooling your Leaf around town, and the air conditioning is on, well, just leave it.
—Published in the Sun-Times, Aug. 22, 2011

* I underestimated the daring of the Nissan Corporation. Even after this ran, they followed up with a second Leaf. I didn't touch the AC.
Posted by Neil Steinberg at 12:00 AM