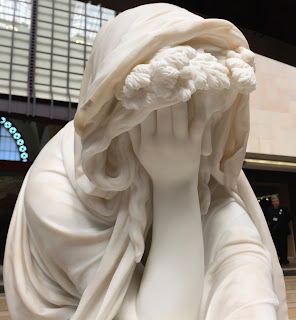 Notice how ineptly Donald Trump paints himself into a corner by assuming the success of his negotiations with North Korea. Putting himself—and the country he leads, unfortunately—in a position of weakness before talks, scheduled for mid-June, even begin.
Trump says he'll walk away if it doesn't go well. But how can he do that when he is already taking a victory lap for something he hasn't yet done and might never do? As is his habit.
One of the many problems with living in a fact-free world: you can pretend you've already done what you will never actually do.
And people believe him.
A reminder that to focus on Trump and his flaws are wrong. There will always be another Trump in the wings, and if we continue susceptible to people like that, there will be no salvation of us.

In the meantime, Trump has to make whatever concessions he will make, elevate the North Korean pariah to an international respect he doesn't deserve—Trump's already done that—and declare the whole thing part of his unbroken, if imaginary, chain of triumph.
Freeing three American hostages is all well and good. But that shouldn't overshadow his alienating our closest allies while embracing the strongman dictators he yearns to become. Did you notice how Trump mentioned that the men he had just freed supported him? That's how hungry for any shred of validation. Look! These guys I just sprang from a North Korean prison approve of me!
You can see by how Trump made a spectacle of the hostages' arrival—being personally on-hand at 3 a.m. and genuflecting before the dictator who finally released them.
“We want to thank Kim Jong Un, who was really excellent," Trump gushed.
It is Kim Jong Un who should be thanking Trump, for all the favors and benefits bestowed. I suppose that's coming.
Posted by Neil Steinberg at 7:37 AM