There's a first time for everything.
After coming home to our old farmhouse on pretty much a daily basis for the past 18 years, I thought I had seen every possible permutation, every one of the old place's various moods and aspects. Pelted by rain, piled with snow. Lit up like a cruise ship at night. Dappled with shadow in the years it was dwarfed by a mighty sugar maple, far taller and older than the house itself. Flaws obvious in the bright sunlight after we lost the tree, a crying need for a new roof (done) and a new paint job (soon).
But I'd never seen our house straddled by a duck. Pausing to chat with a neighbor across the street, glancing over to catch sight of a male mallard standing sentinel on the peak of the roof, next to the chimney.  I broke off our talk and wandered closer, as if mesmerized.
Yes, we have ducks. A couple. For the past few years now. At least I assume it's the same pair. Hard to think they keep being replaced, one set flying off, a new pair arriving.
I'll look out the kitchen window and see them, rooting for seeds knocked off by the smaller birds at our bird feeder.  They lay their eggs somewhere on the property—one year in my compost heap, forcing me to refrain from tossing grass clippings in during their brood's gestation. One season they paraded around with a half dozen ducklings. It was like living in a children's book.
Generally I see them during the regular appearance in our backyard after a heavy rain of what I once saw described in a real estate listing as "a seasonal pond," aka a yard that floods.
The male duck—the "drake"—has an emerald green head, a showy display intended to attract the drab, dun-colored female.
If you think I'm going to insert a joke here, you're out of your mind.
Safer to swerve into etymology. "Duck" is a very old word—more than a thousand years, tracing back to the Old English "duce" meaning, unsurprisingly, "dive."  The 39 species of ducks in North America are divided between divers, which submerge entirely in water to feed, and dabblers, which go face down but leave their backsides on the surface.
The mallard, anas platyrhynchos, is the largest dabbling duck, and the most common, found in North America from the Bering Strait to Florida.  Ducks quack, of course, but the female mallard also is given to "deep, reedy laughing" according to my Sibley Guide to Birds. Which might not be unrelated to the fact that the male duck is one of the few birds with a penis.
In this rare, but if I may be so bold, fortunate minority of penis-possessing birds, ducks are joined by geese and swans; otherwise, about 97 percent of birds don't have penises. To fertilize the females, males simply "mush their genital openings together," according to this National Geographic analysis of avian penises that will tell you more than you can ever care to know about the subject, assuming I haven't done that already.
If you feel comfortable around ducks—perhaps now more of a challenge than usual thanks to the above paragraph—it might be in part because ducks have been accompanying humanity for thousands of years. Wild ducks are depicted on the walls of Egyptian tombs; the Chinese had domesticated ducks 4,000 years ago, and ancient Romans raised them in incubators.
Few ducks are endangered, because they are so good at adapting to the world around them. And because duck hunters are so passionate about their sport. Duck hunters contribute far more to preserving wetlands and wildfowl refuges—hundreds of millions of dollars through the U.S Fish & Wildlife Service's Migratory Bird Hunting and Conservation Stamps—than those whose interest in birds doesn't include killing them. Gun aficionados often pretend that they are not given their due, when appropriate, or that somebody is trying to restrict their rights. But duck hunters help the environment, adding to the nation's population of ducks rather than reducing it, and can hunt ducks with their duck hunting guns until the end of time, as far as I'm concerned.
While generally placid—they have a serenity, like Buddhist monks strolling around a monastery courtyard in contemplation— ducks nevertheless do not enjoy an comfortable place in human  psychology. Though less aggressive than geese, many duck words have negative connotations—"sitting duck," for instance, which originates from drakes molting after reproduction and being unable to fly. Ducks in popular culture invariably are angry and thwarted, whether perennial loser Daffy Duck, sputtering and irascible Donald Duck (who debuted in 1934, same as the duck stamp; one wonders what about that year was so conducive to ducks) or, even worse, his miser uncle Scrooge McDuck. I can't think of a positive duck character—Howard the Duck? Nope. The Ugly Duckling isn't a duck at all but, as he he discovers to his vast relief, a swan.

At the beginning of "Pecked to Death by Ducks," global nature humorist Tim Cahill points out that, despite the title, "There are no ducks in this book."
Then why the title? He tries to explain:

In Bali, I was examining ceremonies in which men and women, overcome with religious zeal, fell into trances and acted like various animals: horses, monkeys, pigs. These people were said to be "sanghyang." A man who becomes entranced and stomps like a horse is called "sanghyang djaran."
I had noticed there were domestic ducks all over Bali. Children brought them back from a day of feeding in the rice paddies. You'd see a lovely child with a white flag in her hand leading a row of waddling  self-important ducks over the levee just at sunset.
Why, I asked Nyoman, is it that I never see someone fall into a trance and become bebec, a duck? Nyoman said he really didn't know. It just wasn't done. Nobody knew how to act like a duck.

That is true. When we try to imitate ducks, we always fail. "Duck, duck goose," a seemingly innocent childhood game where youngsters become faux ducks and are chased by geese has been much maligned in recent decades. Neil F. Williams picked it second in his 1992 Physical Education Hall of Shame, right after dodge ball, for its potential for embarrassing  children, not to mention being a physical activity where the majority of participants sit around and do nothing for most of the game.
"The task for the goose is nearly impossible," Williams wrote in the Journal of Physical Education, Recreation and Dance. "But usually the goose is encouraged by the incessant, high-decibel screaming of the other students, who have little else to do."
Why this general contempt for ducks? There is little scorn for the generic robin or the murderous hawk. I went into the backyard and studied my old married duck couple, slowly rising from their seasonal pond and walking off, together, like a pair of professors lost in conversation, arms behind their backs. Maybe because so many birds we see both in flight and on the ground—geese, crows and sparrows come to mind. Or almost exclusively in flight, like hawks. Ducks seem to be always earthbound, waddling or swimming. I never seem to notice ducks on the wing, and begin to suspect they are birds who can fly but choose not to.
That doesn't sound right either. But it's the best I've got. I'd ask the ducks but they're, you know, ducks. They keep their own counsel. 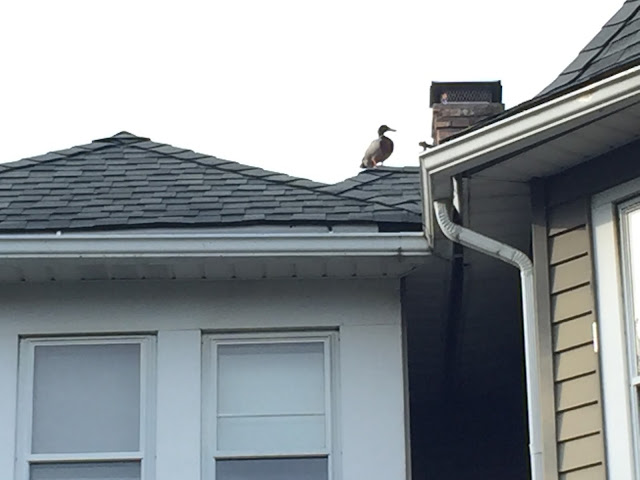