Graduation flashback: Taking a pass on a 'bar ritzvah' 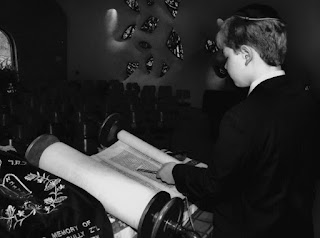 Birth might be the last life transition done without ceremony of any kind. A few phone calls to family and friends, a photo of the new life taken on the day of delivery. Then you collapse at home in exhaustion and relief. The ceremonies don't start until ... well, for Jews, a week later, with the bris, a party marking circumcision.  Rather soon actually.

Then the yearly gong of birthdays. The dress rehearsal of lesser graduations—from pre-school, sometimes, junior high, then the main event, high school, when suddenly the bright sun that has filled your sky for 18 years becomes a distant star, sometimes glimpsed in the night sky, more often not.
My older boy graduates from Pomona College today, and, busy with festivities, listening to speeches, meeting his friends and teachers, and eating, eating, eating, I thought I would mark the occasion here with a transitional column from when he was growing up. This one was about his bar mitzvah. I've left in the joke that used to appear at the end of my columns.

A co-worker asked how my son's bar mitzvah went. Very nice, I said. Then she flashed a little smile—a smirk, really—and inquired about its theme, which I took as a polite way of wondering whether it was one of those grotesque North Shore extravaganzas that one hears about.
I explained, again, that it had no theme—well, "Judaism," I suppose—but there were no hired dancers, no fog machines, no hot air balloons or sit-down dinners for 300 at the Four Seasons with the bar mitzvah boy's bust done in chopped liver, like a butter cow at the state fair. It wasn't built around the Bears or the movies or NASCAR.
This news invariably disappoints—people are keen for new details of the spectacles I think of as "bar ritzvahs," the pop bands and minor celebrities engaged, the self-flattering theme parties, the money spent. Within the last week, I've had acquaintances tell me of bar mitzvahs where a film was shown involving the actual actors from "Lost"—dad is in the TV business, apparently—and one where it was rumored Green Day would perform.
Such tales are a harmless way to indulge in the pleasure of reflecting on the spendthrift idiocy of others. But they are also a reminder that somehow bar mitzvahs have lost their good name.
Part of this might be a kind of prejudice—assuming that any bar mitzvah party will have tables named after various local shopping malls projects an unfair stereotype of crassness onto Jews that is only partially deserved. Indulgent gentile parents throw huge birthday parties for their children, some of which are captured cruelly on that MTV reality show "My Super Sweet 16." Yet strangers do not greet news that one's daughter has turned 16 by asking whether she wept because she got a BMW M5 and not the even-pricier M6.
I should be clear that a confluence of circumstance helped keep us from hosting a bar mitzvah blowout—first, we are not wealthy, which always helps ensure that a person is a critic of excess instead of a perpetrator of it. We settled in Northbrook, which is more proletarian than the New Trier catch basin, where activities involving children—school, athletics, religious events—too often are twisted into Darwinian, king-of-the-hill blood sport.
Second, with the gathering economic disaster, this did not seem the time to indulge in resource-burning Semitic potlatches, which weren't going to happen because, third—and most significantly—neither my wife nor my son felt inclined to show off.
Nor did I, having made a conscious decision that this wasn't going to be about me. I didn't invite any work associates, explaining to those who complained about being left out that it was his bar mitzvah, not mine.
Looking back, none of the moments that stick out involve commerce. None of them induce a wince. The rabbi invited my son's friends up to see the Torah as Ross read from it, and they gathered around and gazed wide-eyed at the ancient scroll. At one point, half of the congregation got up and danced—one of those dipping, hand-holding hora-type dances, not "The Locomotion." My son played "Hatikvah" on the viola.
My most significant contribution to the event—well, besides paying for it, pricy enough, even though the party for his friends was held at the Brunswick lanes in Northbrook—was persuading him to do it, and I must admit the task was neatly accomplished.
My older son's view of God seems on par with the average adult's belief in Santa Claus—a risible bit of cultural baggage that some people actually take seriously—and he was initially reluctant, wondering why he had to go through this time-consuming ritual at all.
I delivered the Team Speech. Three thousand years ago, something happened in the desert. From generation to generation, this thing was passed along in an unbroken chain—no one in the Middle Ages decided, "Hey, I'm going to become Jewish because it's so much fun. . . ." The chain reached unbroken from Moses to my father, for whom this stuff occupies an even tinier corner of mind than it does mine, which is saying something. He nevertheless felt obligated to pass it on to me, and now I was passing it along to him. Because you just never know—it might come in handy someday.
"It's like you're going on a hike in the jungle," I said, groping for a metaphor. "And I say, 'Take along this inflatable rubber raft.' And you say, 'That's stupid, dad, I don't need a raft— it's heavy. I'll be in the forest. There's no water.' But you indulge me, and carry the raft with you, even though it's a bother. Then you come upon a river you must cross. . . ."
Not the most sophisticated theological argument. But it worked—well that, and dangling the prospect of presents. Looking back on the bar mitzvah, I can honestly say I wouldn't have done anything differently, and I'm sure not every parent who hired fire-eaters and rented out Navy Pier for their kid's bar mitzvah can say the same thing.

The party planner had promised a unique bar mitzvah, and so far she had been true to her word. The chartered jet had landed in Tanzania. The line of elephants had been waiting, and then set off toward the base of Mt. Kilimanjaro, where the ceremony would be held at twilight. The father of the bar mitzvah boy was on the last elephant, swaying along the trail.
After traveling for an hour, the elephant train abruptly stopped. The father sat, waiting, for a long time. Finally, he shouted to the person on the elephant ahead of him, "What's wrong?" The question was passed ahead from elephant to elephant. After 20 minutes, the reply worked its way back toward the dad. The guy on the elephant in front of him turned and said, "We have to wait—there are three other bar mitzvah parties ahead of us."
—Originally published in the Sun-Times, Dec. 8, 2008
Posted by Neil Steinberg at 12:00 AM