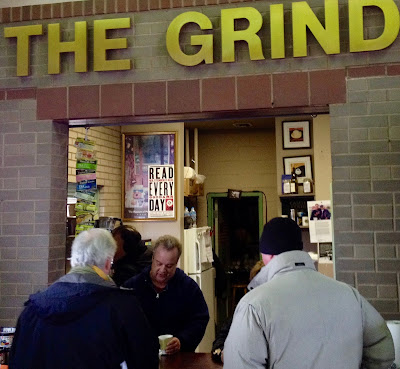 I'm on vacation. This ran back when living in the suburbs still felt uncomfortable, like new clothes that didn't quite fit right.

Every morning at the train station I buy the Sun-Times. Of course I get it delivered at home, but I leave that for the wife. Besides, I enjoy the banter at the station coffee stand, aptly named, "The Grind." One day last week they were out of Sun-Times—stripped clean—so I went to change a buck.
"Can I have four quarters, Connie?" I asked.
"You can have anything you want, dear,'' she said.
"Could you teach my wife to say that?'' I said, happily palming the coins and heading to the platform. There a man with a salt-and-pepper beard was struggling with the Sun-Times box. It sometimes sticks.
"It takes a bit of finesse," I said. He collected his change, and I plugged in my two quarters. The box opened smoothly. I took out a newspaper and held the door so this guy could get one. He did and began to walk away.
"Hey!" I said. "You're supposed to put your money in!"
"It won't take my money!'' he said, shrugging, smirking and hurrying off down the platform.
I wasn't going to let this idiot rip off some poor delivery guy—with me as an accessory, no less. I pumped in the money for him. The train arrived. I sat steaming. That's what I loathe most about suburbanites. They have a trait I call "maximizing their advantage." Rushing across the tracks is only the start. They park their SUVs in the fire lane. They cut in line. They'll shave any corner to scramble up the ant hill. I thought of searching the train, finding this guy, screaming "THIEF!'' in his face. Not just once, but every day on the platform. The pure Javert-like craziness of that made me smile. I would find out where he worked, become a constant nuisance, bursting into meetings, clad in white Biblical robes, demanding 50 cents. "Let it go,'' I told myself. At least he's a reader. But I kept shaking my head all that morning over the man who leapt at the chance to sell his integrity for 50 cents. Shameless.
—Originally published in the Sun-Times, May 31, 2004 Monday