Here, eat your cheese: The State of the Blog, Year Six 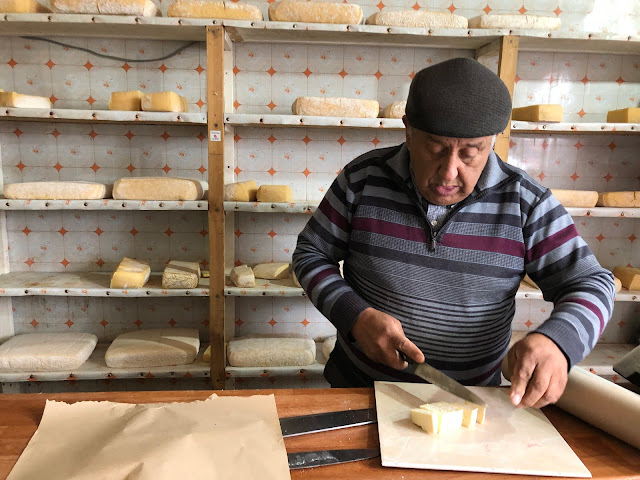 Last July, the newspaper sent me down to Granite City, to see Donald Trump give a speech at the U.S. Steel plant there. On the way home, I stopped for lunch in Dwight, a small town about 100 miles south of Chicago that turned out to have both an unexpected visitor's center housed in a refurbished vintage gas station, and a stunning bank designed by Frank Lloyd Wright in 1906 and still in use.
I wrote a blog post about it, part of the carnival of quotidian essaying that is this blog, shifting from the important to the trivial, the current to the recycled.
Neither news nor entertainment, fish nor foul, EGD wasn't a commercial endeavor, mostly, though it does have aspirations. And of course holiday advertising support from Eli's Cheesecake and its owner Marc Schulman, a tireless supporter of the blog since Day One. Thanks to him, and to all of you who ordered cheesecake.
For five years, the blog marched steadily upward. Readership grew. I imagined it become a Blog of Significance.
Then this year Mark Zuckerberg turned a dial at Facebook, and readership fell 33 percent between August of 2018 and February 2019. Either that, or the public suddenly became indifferent, which is possible too. Though I do believe it is the former I like to think the quality, such as it is, hasn't suffered, but I'm not really the person to judge. And besides: the whole idea that good work is embraced while bad work is ignored is as baseless a fantasy as belief in faeries.
Besides Twitter has also closed down. Last year, I could get 100, 120 new followers a month. Lately I get none. My theory: people see the tweets either pushed by advertising dollars or sent by people with a million followers, neither of which describes me.
I almost didn't count the numbers this year, but figured that would be worse. What's the point of being honest if you fall silent at bad news?
Bad news such as: in July, 2018, EGD had 75,928 readers.  That progressed steadily downward, lower and lower, month by month, until now, when June 2019 clocked in at almost exactly 50,000. with average of about 60,000 hits a month, putting us back to where we were in 2017. And a near-guarantee that next year will be worse.
This, I believe, is where determination becomes a factor. Never never never and all that Churchillian folderol.
When we shift away from statistics, the picture improves.
In August, I started The Saturday Snapshot, using reader's photos to soften the weekend, both for the writers and, I hope, readers. Thanks to Tony, Tom, Nikki and all the regular contributors. We also marked Kitty's anniversary.
The blog carried all my columns in the paper, sometimes with sharper elements that the paper balked at, such as the Spanish headline on Friday's column. I won't run through all my favorites, though I have to mention the one in September where I featured women who donated their breast-milk to soften their grief after the death of their babies. In October, we hung out in Greenwich Village, at Caffe Reggio.
In April, I wrote a dozen pieces of a South American diary, including ones I was proud of on the tango as a guide to life, and a charming cheese shop.
Through it all, a steady fire directed at our president and the quislings and lackeys who support him, such as November's "Bias makes you stupid." For that reason alone, I think the blog is worth doing. Not for its limited and dwindling scope now, so much as to tell people in the future that we pushed back. In case they care.
Which they might not.
This is the place in the first draft of this report where I pressed the back of my wrist to my forehead and complained of being tired. But luckily I looked at past year-end summations, and noticed I was doing that during the blog's go-go sophomore year, when the numbers were zig-zagging skyward. So dispense with that.  Nobody likes a complainer—well, except for Republicans, who seem to love their whiner-in-chief, for reasons I can hardly fathom.

I think that sums it up.  Wherever the beating heart of the internet may be, this ain't it.
But we are not without pride, and like to run a tidy shop ourselves. The cheese store in Necron, Chile wasn't Kraft Foods, either, but its proprietor still served up a delicious slab of fresh cheese for my two dollars. I try to do the same. Thank you for finding your nourishment here, and I'll hope to see you often in Year Seven.