Flashback 2011: Would so many still storm the beach today? 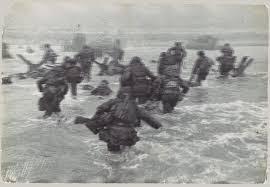 On July 9, 1944, Corporal H. W. Crayton paused "somewhere in France" to write a letter to the parents of Raymond Hoback.
"Dear Mr. and Mrs. Hoback," he began. "While walking along the beach D-Day plus 1, I came upon this Bible and as most any person would do I picked it up from the sand to keep it from being destroyed. I knew that most all Bibles have names and addresses within the cover so I made it my business to thumb through the pages until I came upon the name above. Knowing that you no doubt would want the book returned I am sending it knowing that most Bibles are a book to be cherished. I would have sent it sooner but I have been quite busy . . ."
Knowing he had found a book but not its owner, Corp. Crayton put the best spin he could on the situation.
"You have by now received a letter from your son saying he is well. I sincerely hope so. I imagine what has happened is that your son dropped the book without any notice. Most everybody who landed on the beach D-Day lost something. I for one as others did lost most of my personal belongings, so you see how easy it was to have dropped the book and not known about it. Everything was in such a turmoil . . ."
His hope was in vain—by the time the Bible arrived, the Hobacks had been informed that both Raymond Hoback and his brother Bedford were killed at Omaha Beach, one of 33 pairs of brothers to die, along with more than 2,500 other Allied soldiers, on D-Day, June 6, 1944, 67 years ago today.
The standard reason given to remember such sacrifice is to "honor" those soldiers, but given that they are beyond the touch of what we can do or say, I think it's more important that we remember the devotion to country and willingness to sacrifice they manifested, a sacrifice that, thankfully, has not been demanded of most Americans for a very long time—so long that it is a valid concern whether we'd be able to respond in a similar fashion if called upon to do so again. I like to think we would, but wonder if people could ever be as selfless as they were then.
Bedford Hoback was named for the town he grew up in, Bedford, Va., and 17 of the 30 Bedford men in Company A, 116th Infantry, 29th Division also died that day. It wasn't an accident that they were in harm's way.
"You know, us Bedford boys, we competed to be in the first wave," said Ray Nance, one of the few to return. "We wanted to be there. We wanted to be the first on the beach."
Maybe we're smarter now. Maybe we see the futility of war, particularly the wars we're fighting today in Afghanistan, in Iraq, wars that are not so clear cut. They certainly won't end cleanly. There will be no fall of Berlin, no signing of the Japanese Instrument of Surrender on the deck of the U.S.S. Missouri to cease hostilities. We'll just at some point stop and bring the troops home, blundering blindly forward until then.
Well, that isn't entirely true. As always, we have our history to guide us, a history that shows Americans have always been willing to sacrifice, to rise to the occasion, to defeat evil, to pay a high price, when called upon. We did not choose to enter World War II, the war came to us. I can't say the same about the present wars—the cause might be debatable, the heroism of the soldiers isn't.
But sacrifice is supposed to be spread out. One of the many awful aspects of the current wars is that the full burden falls on such a small segment of the American population: the volunteer military and their families. The rest of us too easily ignore what's happening. Many people know that June 6, 1944 was D-Day. Can you cite one significant date in the Iraq or Afghanistan wars off the top of your head? I certainly can't.
The sacrifice wasn't always spread out in the past either. Bedford suffered a greater rate of D-Day casualties than any other town in America. That is why Congress chose to locate the National D-Day Memorial in Bedford, dedicated 10 years ago today. The monument depicts bronze figures storming a beach, with one representing Raymond Hoback—whose body was never found—face down in the sand, his Bible spilling out of his backpack.
Cpl. Crayton ends his letter. "Time goes by so quickly as it has today. I must close hoping to hear that you received the Bible in good shape."
His parents did. The Hoback brothers' sister, Lucille Boggess, still lives in Bedford, Va., and still cherishes Raymond's Bible.
"You still think about them and miss them and just wonder," she told a local reporter a few days ago. "What would their life have been like if they had lived?''