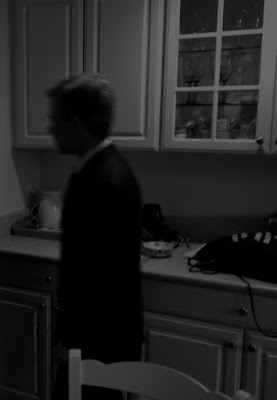 An Ohio teen, Hannah Jones, came home early from college late last month and thought she would surprise her mother. She did. Her mother was indeed very surprised, and shot her. Only winged the young woman, thankfully. But a reminder that people who really cared about the safety of themselves of their families would ditch their guns, since owning a gun ramps up the odds that you'll shoot yourself or a loved one. It made me think of this column, which, to my surprise, I have never posted here before.

Between the time the back door opened with a metallic "kathunk" and when it closed with a dull "knuhtak," I was on my feet, in the early morning bedroom dimness.
I gazed across the sleeping form of my wife, at the clock on her night table: "5:03." My first waking thought was, "cats," the usual source of nocturnal disturbance: cats knocking cups into sinks, cats chasing each other howling through the house. Cats.

The next sound was a very human treading of feet downstairs. My second thought was a grim, "That's not a cat."
I reached into the night table for a weapon.
Many prudent men keep a handgun at their bedside. Houses are broken into. Horrors occur. A man must protect his family.
And though I am certainly a prudent man, I am also a mathematical fellow, and can do numbers: the odds of bad stuff taking place in my leafy suburban paradise of Northbrook, of dangerous situations that can be resolved by my being armed, are minuscule—say a 10-second window every 20 years, if that—compared to the low-level threat posed 24 hours a day, seven days a week, by the weapon itself. "The blade itself is an incitement to violence," as Homer put it. Plus accident: the possibility that, reaching into the drawer for a pen, I would manage to fire the handgun and blow my kneecap off. Owning a gun in Northbrook makes as much as sense as owning a grenade.
Yet many people, indulging in their Clint Eastwood fantasies, don't see it that way.
Anyway. For reasons mathematical, I reached, not for a pistol, but for a black Mag-Light flashlight. Not the most potent weapon, true, but a 10-inch-long steel cylindrical club that at least instilled a tiny bit of confidence—and isn't that what weapon ownership is all about? To calm our insecurities? Why otherwise would people assemble, not one gun or five, but whole arsenals, plus bottled water and dried food and God knows what else. A desperate, futile attempt to feel protected.
The flashlight was satisfyingly heavy in my hand, thanks to its trio of D batteries, ready to bash whoever was making those footsteps.
At the bedroom door I saw the downstairs lights were blazing. A second possibility, after cats, stirred at the back of my mind.
"Ross, is that you?" I squeaked, my voice suddenly thin and anemic.
"Go to bed," my 17-year-old commanded, tossing a pile of calculators, pens and notebooks onto the kitchen table, then looking around at the downstairs, lit up like a cruise ship.
"Why are all the lights on?" he asked
"Your mother probably left them on for you," I said, meekly complying with his command, climbing the stairs, limply holding my flashlight. "Turn them off before you go to sleep."
Not that I would have shot him if I had a gun, mind you—I like to think that I would be the sort of gun owner who takes a gander at what he's shooting. But doesn't every gun owner tell himself that? Yet teenage boys creeping in at dawn are still blown away by sleepy dads, far more, I'd bet, than the number of potato-nosed villains in black and white striped shirts and soft caps, caught dead-to-rights, with the family silverware in a sack over their shoulders.
The reason

OK. OK. I know my audience. I can't just have my kid waltzing home at 5:03 a.m. without SOME explanation.
But it's delicate . . . and as much as readers say they enjoy reading about the boys, they just don't appear here all that much anymore. They're studying a lot, or slumped on sofas, flipping through magazines or watching TV. There isn't much to say. I try to respect their privacy.
He was coming home so late because . . .
Oh, this will be hard to believe. I have a hard time believing it. When I was 17, and crept home with the dawn, it was not for this reason or anything like it. But kids nowadays . . . I'm no dupe; I've considered other scenarios, just to see if there is any chance an alternate might be possible. I wish there were. But there isn't.
OK. Here goes: The 15th Annual High School Mathematical Contest in Modeling, run by the Consortium for Mathematics and Its Applications. Each team—he and three pals—picks a problem and has exactly 36 hours to answer it. They were at a buddy's house crunching numbers all night. After he had slept, my wife's attempt to pry more information resulted in exactly one sentence, an exasperated, "We were modeling gasoline prices, mother." And that was it.
Don't get me wrong. I'm proud. Though I worry he's frittering away his youth, and have encouraged him to pursue other, umm, non-mathematical activities ("Think of it as a new skill set you could master," I said, wanly). But with kids, you have to accept what you get, and as strange as it is, at times, I'm not complaining. I'm just glad I didn't shoot him.