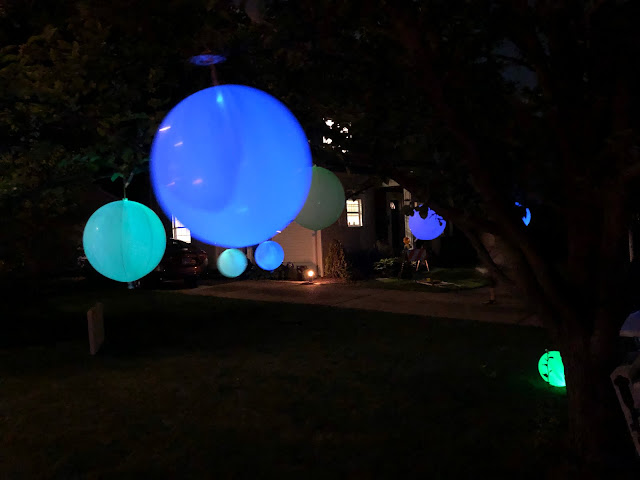 Did you have a good summer? Now that we're hurtling into September, hard to believe it's almost gone. For me, spine surgery carved out a big two-month chunk, cancelling two vacations and sucking up all my attention and energy. That was unfortunate.
But I did have one beautiful day. Center Avenue had a block party a few weeks ago. It was a marvel of planning—thank you Carla, thank you Tanya, thank you all the other neighbors who helped out. Not only the usual tables of food and tubs of cold drinks, but live bands. A fire truck and bouncy house for the kids. Games. My oldest boy was in town, and we all hung out, chatting, eating, listening to music as day turned into evening, then into night. I think I spent eight hours, from setting up to the last stragglers sitting around a fire pit in the front yard. Playing corn hole. Dancing in the street—really, how often do you get the chance to dance in the street? Not often enough.
After dark, someone produced something I had never seen before. Lighted balloons. I hope that doesn't tar me as hopelessly out of it, and that you haven't been enjoying LED balloons since the 1950s. I'm sure you'll let me know. But they were new to me. Not only did the balloons glow sooth shades of blue and green, but they changed colors. I'd never seen anything like it. Finally, a new technology that isn't menacing.
A tiny girl—5, 7, it's hard to tell anymore—walked up to me and, with heartbreaking solemnity, presented me with one, saying, "Would you like this balloon? Please take it." You can't very well say no to that. I accepted it with a bow.
Though once I had the balloon, there was a difficulty: what to do with it? I carried the balloon for a bit, giving it a few tentative tosses into the air and catching it. But that got old. I didn't want to cast the balloon away, not after that little girl had so earnestly entrusted me with it. It would pop on the ground. And be my fault.
Then I had a brainstorm. There was a low branched tree in the yard where the block party was centered. I took the string from the balloon and wrapped it around a branch. A good idea spread. Other people automatically followed my lead—that never happens—and soon the tree was festooned with balloons, all gently changing colors. It was gorgeous. When I think of the summer of 2019, I'll think of that. 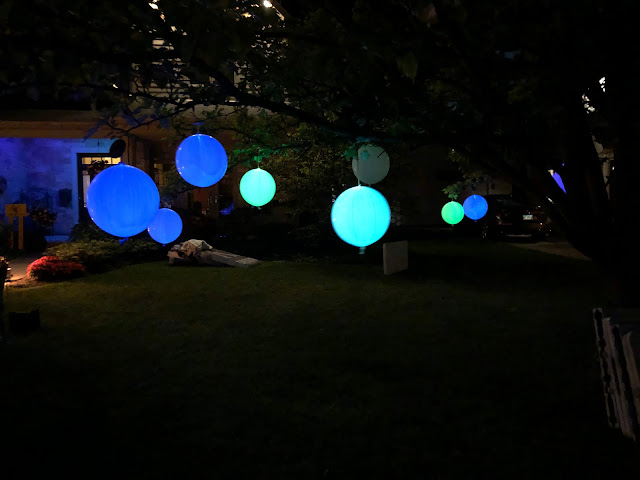