And you think YOU go through changes... 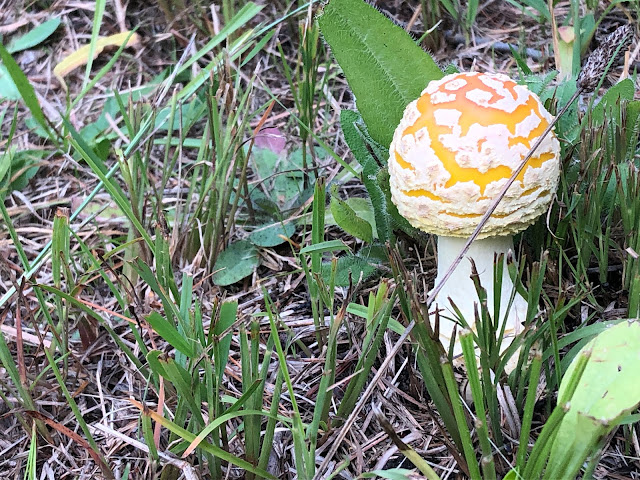 "Do you want to see some interesting mushrooms?" my friend Rory said, or words to that effect, over the weekend in the Upper Peninsula of Michigan.

I admitted that I did, and followed him into a field of wildflowers—black-eyed Susans, mostly—just off the road to where we were staying.
The mushrooms were interesting indeed. A big, golf ball-size yellow one, mottled, somewhat resembling Jupiter, and then a similarly colored, but differently configured mushroom shaped like a small pancake.
I dutifully took photos of both.
The obvious question then became: what kind of mushrooms are these?
I figured the internet machine would be of help. I plugged in "Mushroom Identifier," and then clicked on the promising "Mushroom Identification Help" from something called Mushroom World.
It offered pages of paired photos of types of mushrooms, none of which looked like my mushrooms. The next step was a Google Image search, but that didn't find a mate either. 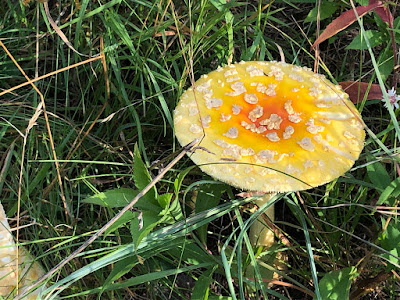 There were a number of Mushroom Identification apps on the iPhone, but they not only wanted money upfront, but expected me to sign up for a subscription, as if ID'ing mushrooms were to be an ongoing concern. Which I do not expect; really, I was just curious about these two.
So I plugged in "Yellow Mushroom Upper Peninsula Michigan." The first hit was "Michigan Species List (159)." I assumed "159" to be the number of species described. As luck would have it—it's better to be lucky than good—my mushroom was number three, "Observation 25037: Amanita muscaria var. guessowii Veselý." It included four photos, one looking similar to my first spherical mushroom atop the blog, the other three of a pancaked mushroom.
In a note taken 10 years ago, Sept, 8, 2009, the observer, Jon Reck, wrote: " The three bottom photos are from the same mushroom as the top one, 24 hours later. (But you probably knew that anyway)."
I did not know that anyway. Though now, having found out the name, I was saddled with a new question: Why do spherical mushrooms open? (This curiosity thing can be hell sometimes, a junkie scramble from one puzzle to the next).
I had a guess—the mushroom mutates in order to drop spores—but a guess is not a certainty.
So I shot off an email to the Field Museum—I once went on a field trip to Indiana with their mushroom expert, years ago, in the few minutes I was the newspaper's environment reporter. Do they still have one, I asked, and can he answer a basic mushroom question?
Waiting, I dug into Jon Reck. Who posts photos of mushrooms for the edification of others?
"I’m a printer," writes Reck on his mushroom hunter page. "I live in the country on a small lake with my wife and two dogs. Have two grown sons. Enjoy photography and computers. Have always been fascinated by the ever-expanding extremes of the very small and large."
A few hours passed. I put in a call to the Field to prod them. The Amanita Muscaria is both hallucinogenic and poisonous, which would at first seem to be mutually exclusive qualities. But the toxins are water soluble, and can be drained off, leaving you with, well, whatever hallucinogenic thrill this particular mushroom provides.
The name "muscaria," by the way, is from Latin musca, meaning "a fly." The common name of the mushroom is the Fly Agaric; it would be used in European countries as an insecticide: crumbled in saucers of milk, the milk would absorb enough poison to the kill flies that drank it.
Toward end of day, the museum got back to me.
"Why does it go from that shape?" said Wyatt Gaswick, a mushroom expert at the Field Museum. "When it's in its spherical shape the gills are just developing.  They're protected by a little membrane that rips away. It expands once it gets older, exposes it to the air so mature spores can drop out, catch the breeze and get from point A to point B."
Turns out I had guessed correctly. Gaswick confirmed that my seat-of-the-pants identification was also correct. While I had him on the phone, I had to ask: How are mushrooms faring in the face of our climate crisis?
"It's difficult to tell for fungi in general, because so much basic knowledge—how many species? Their identity?—so much basic research remains undone, it's hard to see patterns. Mushrooms are responding to climate change. Things are starting to fruit in the fall and spring. They should come up in the fall."
"Fruit" by the way, is the term of art for mushrooms popping up, and quite descriptive of what we are looking at.
"Like an apple is the temporary reproductive part of a tree," Gaswick said, "a mushroom is the temporary reproductive part of fungus," the bulk of which remains underground.
All told, I was glad Rory called me over.