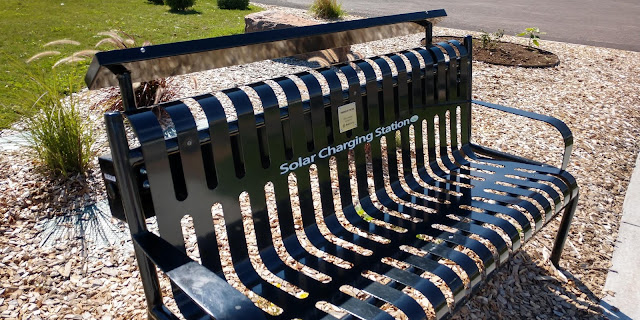 I can't be everywhere, nor would I want to. Think of how tiring that would be and, besides, how would you dress?
But my readers are far afield, and ace craftsman Tony Galati sent me these photos he took under the subject heading, "The future is here."
Tony writes:


I found this Solar Charging Station park bench at the marina in Bayfield Wisconsin. I've never seen anything like it. I love seeing clean energy ideas like this. They send the right messages—one of them being: Republican lawmakers can go fuck themselves.

Well said. That would certainly give them a break from fucking our country. You know the solar future is chugging toward us when remote outposts start jumping on the bandwagon. Bayfield, if it doesn't ring a bell, is a town of 530 souls 450 miles northwest of Chicago, on Lake Superior.
Speaking of lawmakers, I thought I would rouse someone from Bayfield officialdom, such as it may be, and try to squeeze out a little more information on this bench. I started at the City of Bayfield, where, despite promises of the phone system, typing the last name of mayor, Gordon T. Ringberg, does not in fact lead you to his voicemail. I tried the Chamber of Commerce and Visitor's Center. There a person did answer the phone. Thinking I might prompt her to rhapsodize Bayfield, I observed that I had just been up to Ontonagon, east of there, and speculated "if Bayfield were half as beautiful it would be very beautiful indeed," or words to that effect.
The Visitor's Center lady let that slow pitch thump into the catcher's mitt, and explained, and none too warmly, that I needed to talk to a Billie Hooperman, back at the city.
Alas, Billie was not manning her telephone. A message was left for her, plus an email to the city for good measure.
Poking around online, I quickly ID'ed Tony's find as an Uptown Charging Bench from  Sun Charge Systems of Cleveland, Alabama. The one I saw for sale was an invigorating electric blue and cost $3,000. But still, the thing stopped being high tech and began to seem almost cobbled-together when I encountered other, sleeker, more well-designed solar benches on the market, such as those from EnGoPlanet, which incorporate the solar cells in the seat of the bench.
Still curious how this bench, which allows you to enjoy the scenery and charge your phone, ended up on the shores of Lake Superior, as Friday waned, I asked Tony which marina—there are several—and he said it was the Bayfield Civic League Memorial Park.  No luck there either. I suppose Bayfielders value their solitude, and let's just leave them in it.