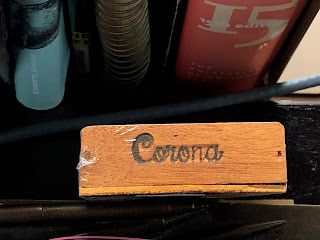 When the boys went away to college, my wife and I discussed downsizing, moving to a smaller place, maybe two bedrooms in the city.
That conversation lasted about 30 seconds.
Because we love the old place, and the neighbors, and moving is such an enormous chore.
"We moved here for a reason," I'd say, alluding to the schools. "Let's move somewhere else for a reason too." That sounded like logic. Then I'd pause, and add another thought, to seal the argument. "And you never know. The boys could end up back at home."
That was meant as an improbability. Almost a joke. A little light flourish at the end of a conversation. That wasn't happening. We didn't really expect them back in their old bedrooms, still painted the same aqua that welcomed them when they were 3 and 4.
But back they are. As of yesterday. With both law schools shifted to remote classes, and one campus emptying out, while the other, New York City, perhaps not the place to ride out a pandemic of unknown scope, return to the heretofore empty nest suddenly seemed prudent. If they don't come back now, I cautioned, coming back later might be more difficult. "You could end up having to walk back from Virginia" I told the younger boy. Air travel still works, for the moment, let's use it. Without coordinating their plans, they arrived at O'Hare within 10 minutes of each other Friday afternoon. I went outdoors to collect them. Normally I'd park and go into the terminal get them—less stress and at $2 to park for 30 minutes, the best deal in the city. But now my wife forbade me from setting foot inside O'Hare. Infection. A changed world. So I pulled over to Terminal 3 and they hopped in.
I won't lie. I am happy to have my sons home. The younger boy brought his kitten, now almost a cat. The older brought me cigars from his recent travels. "Corona," he pointed out dryly. I nodded, missing the joke completely. Ah. Sorry. Old, slow on the uptake. Corona...like the disease. Good one. That's one of the wonderful things about kids. They keep you on your toes.
Happy to have them. At least on Day One. Happy to be on my toes, while understanding that happiness at a practical measure taking during a global crisis is perhaps wrong and bound to be fleeting anyway. My wife is already working in a corner of the living room. They'll be upstairs, attending classes remotely and editing law reviews, in bedrooms flanking mine. We'll all be trying not to get in each other's way. Serenity will be a flickering ember we'll all have to puff on to keep lit.
The first family dinner went well—not in the kitchen, where it would usually be, but in the dining room, the better to spread out and encourage social distancing. The legality of J.B. Pritzker's order for people to stay in their homes was critiqued, and various other practical steps discussed. Then the younger one said, "You should get a gun, dad."
"That's right," the older chimed in. "You should get a gun."
I couldn't tell if they were joking or not. They didn't seem to be joking. Too many zombie movies. I have my second FOID card—they expire every 10 years. We'd all gone shooting a couple times, but I hadn't pegged them as gun fans.
"What would I need a gun for?" I asked.
"To stop looting," one said.
"To stop looting by who?" I wondered.
"To stop looting by whom?" the older one corrected. "Just because the laws of society are crumbling doesn't mean the laws of grammar have to."
Actually, those two developments usually go hand-in-hand. I didn't say that. Nor did I get annoyed; trying not to be annoyed with each other is, if not as important as washing our hands frequently, still pretty darn important. I just laughed, shaking my head. Which is also important. Because besides the risk of infection, there will be the risks that come with living in an altered world, with changes in jobs as industries grind to a halt and the economy seizes up. Shifting family dynamics, close quarters, all sorts of new stresses vectoring in from unexpected directions. I'm not expecting looters, but I am expecting a certain number of folks to snap and start shooting each other, or themselves, just because that happens periodically already, when there isn't a global crisis. This period is a challenge and, being a challenge, is also an opportunity for us to fall apart or shine. I for one do not intend to shine by sitting in my living room with a shotgun across my knees, waiting to shoot the first person who jiggles the door handle. They can have the toilet paper.