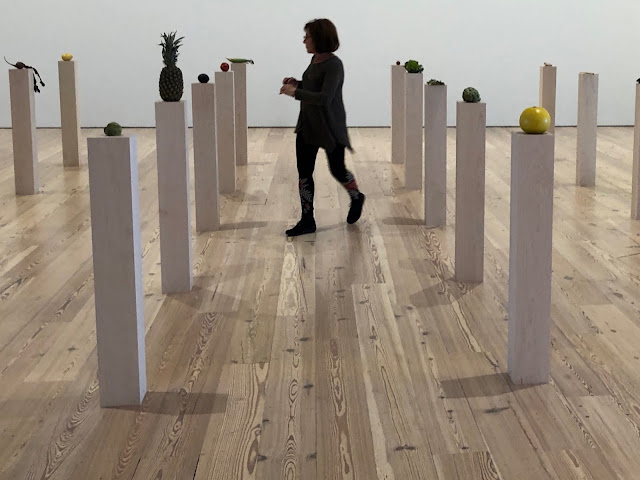 When a joke goes flat, or a story is met with a shrug, the struggling comic, or flailing storyteller, will sometimes try to bring the effort to a close while preserving a shred of dignity with, "Maybe you had to be there."
Some experiences need to be, well, experienced. Photos and words just don't convey the thing.
Which is quite the admission from someone in the word business.
I wondered if this was the case when I first thought to share Darren Bader's art installation "fruit, vegetables; fruit and vegetable salad." Just writing the title, the whole thing seems impossibly arch and conceptual and twee and stupid.
But that wasn't how it felt. Stepping off the elevator on the eighth floor at the Whitney Museum of American Art last month, confronted by these 40 austere wooden pedestals displaying produce, was cool. For all the conceptual art depredations that go on in contemporary museums, there is still a default expectation of gravitas, of significance, of vale, one that is punctured by the literal elevation of grapefruits and asparagus and leeks.
What's he saying? Hell if I know. Maybe something about the worth of what too often we let go bad in the refrigerator. The artist nods at “nature’s impeccable sculpture,” which sounds about right, but then the artist's statement, besides offering general guidelines to presenting the exhibit (the number of pedestals, for example, being "any even number between twelve and infinity") emphasizes that the citrus and melons and carrots and such on display are to be rendered into salad every day, as if the whole point were reducing the burden on landfills.

“Before over-ripening, the produce is removed from the pedestals by museum staff," we are told. "It is then chopped, sliced, shaved, and diced into a salad, which is served to visitors.”

Of course it is. The result has already—the show closed Feb. 17—been thoroughly mocked. "I ate the worst salad of my life in the name of art."
Perhaps it helped that, the day we visited, salad preparation times were not convenient, and we skipped standing around 40 empty plinths, waiting for cup of fruit and vegetable slaw.
Instead, what I took away from it was that you could walk among the pedestals. That was dynamic and engaging, to be inside the display, since I was taking photographs, which became an exercise in parallax, as I alternated between trying to frame people out, so I got an empty shot of just produce on plinths, to then including the visitors, as dark figures off in a corner of the frame. 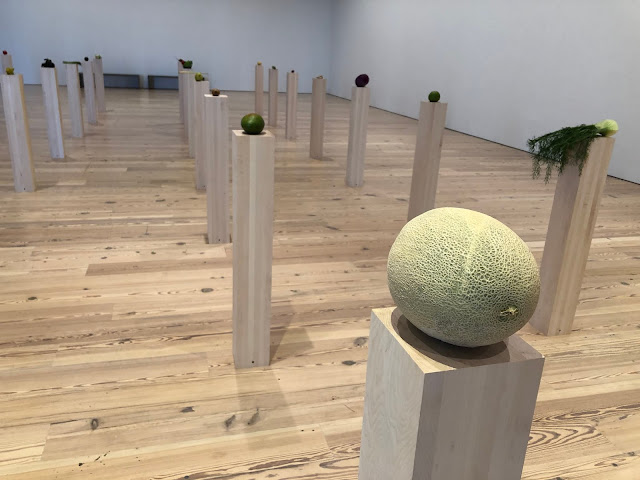