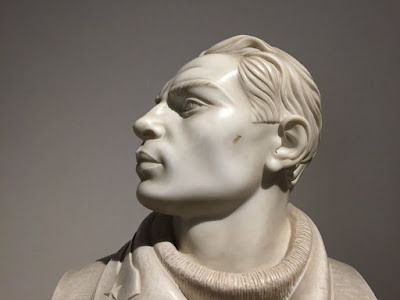 Lots of reaction to yesterday's column on the Chicago Public Schools scrapping Columbus Day. I particularly appreciated those from Italian-Americans saying they share my sentiments.
Though this one, from Charlotte Ulmanis, made my day:

Good Morning,Good Columbus-Native American column.If my father Scott Williams Thundercloud was still around he would try to adopt you into the Ottawa nation.

Some brought up aspects that I agree with but didn't have space to explore: Certain native-American groups were themselves barbaric, and why do they get the soft-focus "Dances with Wolves" treatment while people keep trying to pry the Columbus blankie out of their hands?
Easy. Because life ain't fair. Because society undulates in peaks and valleys, which is what makes the cling-to-the-past-because-it's-what-we're-comfortable-with approach such a non-starter. I could see arguing that Columbus Day could be kept as a grim day of reflection, like Holocaust Remembrance Day. But nobody seems to want that.
Of course, others were ... well, maybe I should let them speak for themselves. This, from Alfred Pilotto who, to his credit, allowed me to reprint it, can stand in for them all, and I will post it without commentary:


Your totally missing the point..its the fact that italians are getting erased in history more and more and by whom...people who have no idea probably who Columbus even was..I'm talking about the chicago public school system, frankly you can call it idiot day because all of the kids in CPS care about is a day off school. The liberal masses no matter how small win again. If this day was about an African American no matter what atrocities he committed there is no way it would be changed to anything else but what it is. Do we analyze every single person who was given a holiday,,I'm sure we can even find several wrongs with even dr.king for that matter but the Democrats/liberals who would never upset the African American community simply for their votes are using this to show how diverse or worse that they really care..how bout eliminating Thanksgiving or even changing the name..how bout veterans day because well they killed people with guns..Italians are a proud community and worked extremely hard for everything they have with no help from anyone. We dont deserve to be erased by a bunch of libs/dems who either pander or after 100 yrs think they know better..back in the day people used to say merry Christmas without insulting someone and that's the way it was, leave well enough alone..how bout this..how bout we have a happy indictment day for half of these moron aldermen who get indicted on an regular basis or give the kids a day off every time a CPS official fails to do their job..call it clueless day..that's what the cps needs to be concerned about..thanks, sincerely a proud Italian