You expect to see weird fashion in the New York Times Style section. Laughably odd, futuristic haloes and shiny rubber pants that blob out at the cuff instead of tapering in, the fertile, the uninhibited imaginings of an army of ambitious young designers intended only to catch attention, shock, perhaps hint at the future, certainly never be worn by a human being in the living world. Hardly worth the puff of a sigh, since they'll vanish in a moment anyway and be replaced by something even stranger.
Other places you expect nothing but staid tradition, your L.L. Bean, your Eddie Bauer, perhaps offering up a new kind of plaid in this year's crop of flannel shirts. A duck boot that isn't green, maybe. 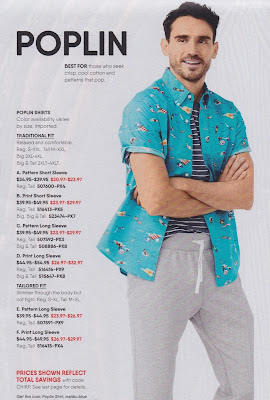 So it was with surprise that I flipped open my Lands' End Men catalogue this week and saw, well, just look at it. The grey sweat pants/aqua poplin diver-and- beach-umbrella motif Hawaiian shirt over a white striped blue tee would be terrible on any normal human being, and looks pretty bad on their model.
But turns out that was only prelude.
Before we get to the matter-at-hand, I suppose I should admit that I do wear one of those black Lands' End puffy jackets simply because my wife bought it for me, it's warm, and everybody else has one.
Otherwise, the company already pretty much lost me. First, because I discovered the far better made, far more stylish and classic L.L. Bean. There's just no comparison.
Second, Lands' End divided their t-shirts into regular t-shirts and "Super Ts," the former being of such poor quality I'm not sure what they're for. Straight to rags, perhaps, just cut up directly out of the package and start dusting.
Anyway, I'm thumbing through the catalogue, basically just trying to shake off the shock of the guy at the right, and they do manage a spread of seersuckers—I've got a few, very comfortable on hot days—and linen and madras shirts.
Then this: "We spell comfort S-L-U-B." Again, you really have to see it, as disbelief is a definite risk, and documentary evidence important. Here you go. 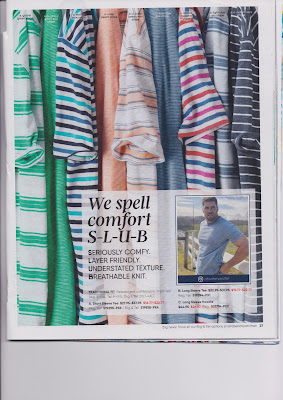 Slub? Really? A misspelling of Yiddish schlub perhaps, which I think of as an inept, pitiful, weak, put-upon man. ("A person regarded as clumsy, stupid, or unattractive" is how the Free Dictionary defines it). Is that really their target market?
How can this happen? I mean, I know Lands' End is going for the WASPy, Connecticut boathouse ethos, but it's still clothing, still the rag trade. I have to imagine there are Jews somewhere, working, perched on stools, needle and threads in hand, mouthful of pins, somewhere in the background. They could have consulted them.
"Slub?" They present it as a kind of concrete poem acronym for

It looks like an Onion parody, doesn't it? I knew almost half the country was cracked when Donald Trump nearly was re-elected after four years of stomach-churning failure and shameful idiocy. But somehow I never expected the nation's bottomless dimness to bleed into clothing catalogues. Companies lately have been bastions against the most extreme government missteps, drawing away from the staggeringly wrong, at least a little.
I've given this too much thought already, and ought to wrap this up with a conclusion. I blame ... COVID. Think about it. Their catalogue staff, scattered at a dozen separate apartments and laundry rooms, trying to put together something based on the CEO's cracked notion, "let's get comfy," lowercase, natch. They actually copyrighted the phrase, "let's get comfy," which sounds to me like something a hardened heiress would purr trying to seduce Sam Spade as he looks for clues on the San Fransisco wharf front in a Dashiell Hammett novel.
Expanding on comfiness, someone floats the shlub idea. In person, the I-just-ate-a-bad-clam expressions of their colleagues would have killed that in the cradle. But you can't make out expressions on Zoom so well, and once it survives birth the Shlub Idea, now official, takes on a weight and momentum of its own, until I'm holding the catalogue in my hand, shaking my head and filing away the story so I can repeat it by way of explanation when Lands' End goes out of business in a couple years.
Posted by Neil Steinberg at 12:00 AM