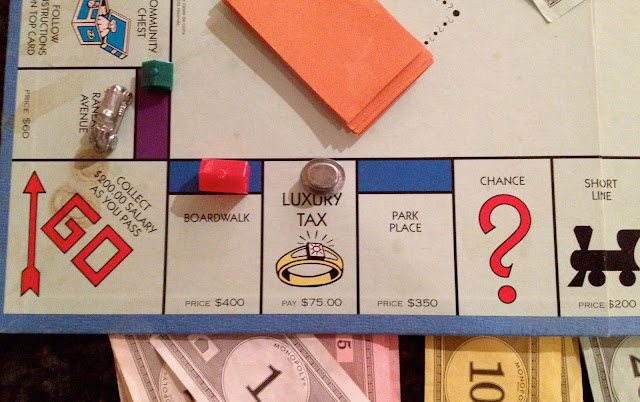 I pulled this up thinking to post it on World Monopoly Day, which is March 19, but doing my due diligence uncovered a rival National Play Monopoly Day, Nov. 19, and rather than try to suss which was the "true" holiday for the board game, I decided it would be the perfect post to save as a fire axe behind glass, to run when for whatever reason I didn't come up with anything better.

Publicity is more art than science. Yet, like science, it has its formulas. Start with spectacle—parade the circus elephants through downtown. If that doesn't produce the desired result, mix in a spoonful of crisis—allow the elephants to "escape," then watch the photographers come running.
Or when you have a beloved icon, the standard formula is to mess with it in some insignificant way. Suddenly, in the words of Arthur Miller, "attention must be paid."
Thus, I smiled to see Hasbro take a page from the old PR lab manual and add a gram of "Survivor": a popularity contest for its 77-year-old stalwart, Monopoly, that will eliminate one current token while adding one of five new token designs. The media bit, big time.
"Here's your chance to make those wishes known," the AP ballyhooed.
Normally, I wouldn't touch this story. Yes, I am a traditionalist; I wince at all those themed Monopoly editions—for individual cities or sports teams or whatever. Junk. The central joy of Monopoly, to me, is its pure form. Part graphic—the question mark of chance, the familiar property colors, the cop, the diamond ring. Part is just the physical act of throwing the dice, marching the top hat—always the hat—around the board, passing "Go," counting up the money. My boys learned to count by playing Monopoly, which made my wife and me shake our heads at the electronic version, where a computer counts. What's the point? Efficiency? Why not just let the computer play the whole game while you go off and do something else?
Still, I'm not going to bemoan the loss of whatever token is cashiered by this stunt. Even if it were my beloved top hat. It isn't as if Hasbro is going to come collect our old sets, and they last for decades—that's why the company is doing this in the first place, to create a little false urgency and move some product during the post-Christmas slough.
But since Monopoly tokens are in the news, I should point out one overlooked aspect: They have local roots; in fact, Monopoly tokens are as Chicago as deep-dish pizza. It's an amazing story, and if you have a Monopoly set—and who doesn't?—dig out the iron and look at it, because it is the key actor in this drama, crawling like Sweet Pea through the construction site chaos of the past century, yet miraculously untouched.
Ready? Here goes.
Ole Odegard was born in Norway. He came to Chicago, and in 1896 opened a laundry, eventually located at 3629 N. Halsted.
Chicago was a center of the laundering profession—the National Laundry Owners' Association was in Joliet, where it had an institute of laundering (the Coin Laundry Association is still here, in Oak Brook). On the West Side was the National Laundry Journal, run by brothers Sam and Charles Dowst.
Sam Dowst, like much of the city, attended the 1893 World's Fair, where he saw the Mergenthaler Linotype machine, which creates type by shooting hot lead into molds. He realized that not only could it make type, but also buttons and collar stays—always of use to laundry owners.
So the Dowsts bought a machine. One journal subscriber, Ole Odegard, wanted to win the loyalty of his customers' children by giving them small prizes. He asked the Dowsts if they could whip up some kind of charm for his business, the Flat Iron Laundry. Something ... like ... a ... little flat iron.
They did, as well as small die cast cars, which they called Tootsietoys. Nor were they the only Chicago company making charms; a company called Cosmo turned them out, too, selling to another local business, Cracker Jack. The two companies merged in 1926, becoming Strombecker Toys.
Parker Brothers rolled out Monopoly in 1935, using wood dowels as tokens; it decided to include six made-in-Chicago metal tokens in 1937: a thimble, cannon, top hat (hooray!), shoe, battleship and that original flat iron. In the 1950s, it added a Scottie dog, race car and wheelbarrow, and lost the cannon.
One of those eight will be "locked up forever," according to Monopoly's Save Your Token Facebook page, replaced by one of five new would-be tokens: a robot, helicopter, guitar, diamond ring or cat.
The election runs until Feb. 5. Just good fun, right? Perhaps. They're fiddling with success, with what some claim is the key to the game's popularity. "So what is it about Monopoly that has made it the most successful proprietary game in history?" Tim Walsh asks, in Timeless Toys. "I took my own informal survey and was surprised at what I heard over and over again. The players have spoken. It's the game pieces."
Just to be on the safe side, I went on Facebook and voted to keep the top hat, now tied for third with the battleship (the Scottie dog is in the lead, natch). It's the original flat iron that's in trouble, second to last place, currently held by the wheelbarrow. Of course. Nobody respects tradition anymore.

The iron lost, and was replaced by a cat. In 2017, Hasbro went back to the well and asked fans to vote on the lineup, pitting the eight pieces 50 newcomers including a computer, a rather brick-like cell phone, a thumbs up, a variety of smiley face emojis. Some 4.3 million votes were cast, the thimble, boot and wheelbarrow lost, and were replaced by a T-Rex, rubber ducky and penguin.
Posted by Neil Steinberg at 12:00 AM