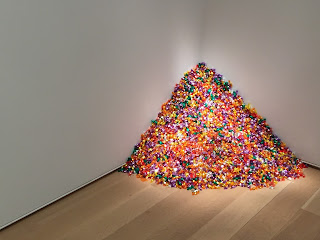 Sometimes, the simplest question will help bring clarity. I wrote a column Monday celebrating the simply joy of blowing two bucks on Powerball. Then Rosemarie, a regular reader, asked this:


I enjoyed your "Surrendering to Powerball" column and will put to you a question that has long baffled me: Instead of making it more difficult to win — as they have recently done — by giving only one person (or two) a $5 million or $18 million Powerball (or Lotto or ...) prize, why not give $1 million or $6 million to 100 or 500 individuals? It would seem to invite more participants and therefore more revenue from the multiplied interested by doing this.

A fair question. I thought about it, and answered:


The reason, I imagine, is that bigger pots draw in more players, which draws in more money. The purpose of these lotteries is not to benefit the winners — were that the case, you're right, it would make more sense to give away a thousand million dollar prizes. The purpose is to squeeze more money out of the public. Hence the one billion dollar prize.

Evidence of the utter irrationality of humans. Because winning $1.6 billion, while no doubt an occasion for joy for the several people who won it Wednesday night, would no doubt have tremendous stresses as well, as a few regular schlebs sudden find themselves in charge of vast fortunes. It could be argued that winning a much smaller sum — say $200,000 — would provide all the bill-killing benefits, with none of the who-should-run-my-foundation? headaches, and do for hundreds if not thousands of people.
Which means, were people thinking clearly, they'd flock to put their money down trying to win something like the Lucky Day Lotto run by the Illinois lottery, whose odds of winning a $200,000 payout are one in 1.2 million, and avoid Powerball with its 1 in 292 million odds that 44 states working in concert can't seem to win more than once every few months.
But they're not thinking clearly, are they? They're dreaming. And while I stand by my earlier epiphany that it can be fun to snap up a ticket now and then, that doesn't change the greater truth: the purpose of Powerball is to take your money, not give money to you.